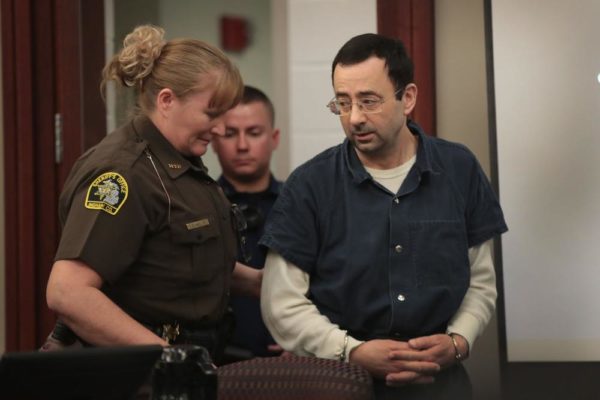 LANSING, MI – JANUARY 17: Larry Nassar (R) arrives in court to listen to victim impact statements during his sentencing hearing after being accused of molesting more than 100 girls while he was a physician for USA Gymnastics and Michigan State University, where he had his sports-medicine practice on January 17, 2018 in Lansing, Michigan. Nassar has pleaded guilty in Ingham County, Michigan, to sexually assaulting seven girls, but the judge is allowing all his accusers to speak. (Photo by Scott Olson/Getty Images)

Larry Nassar, former USA Gymnastics team doctor, has been sentenced to between 40 and 175 years in prison, Guardian reports.

Nassar, who had previously pled guilty to molesting 7 girls under his care, had a total of 156 girls and women testify against him at his sentencing hearing.

Another 24 girls and women also submitted private letters to the court, explaining how they too suffered abuse at the hands of Nassar.

“It is my honor to sentence you because, sir, you do not deserve to walk outside of a prison ever again,” Judge Rosemarie Aquilina, who gave the judgement said. “Anywhere you walk, destruction would occur to those most vulnerable,” she added.

Nassar, giving a brief statement before the sentencing, said hearing his victims’ testimonies shook him to his core. He said:

Your words these past several days have had a significant emotional effect on myself and have shaken me to my core.

I will carry your words with me for the rest of my days.

His victims who testified included Olympic champions Aly Raisman and McKayla Maroney, and other high profile victims who didn’t includes Simone Biles, who just last week came out to say on Twitter that she too was abused by Nassar.

Nassar is currently serving a 60-year sentence in federal prison for possession of child pornography.