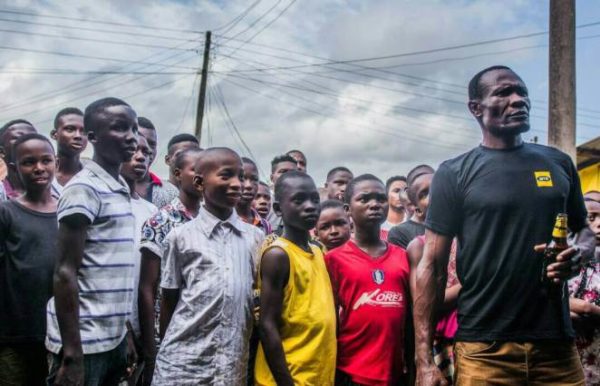 Shot in Oguta,Imo State, Onyeka Nwelue‘s Igbo language film ‘Agwaetiti Obiụtọ’ tells the satirical tale of Oguta through the lives of four friends: Bugzy Dvinci (Obinna Nwokedi), Willie (Willie Samuel Iboro), Arbenco (Arbenco Aigbe) and Akah (Lorenzo Menakaya), who are pulled from their separate hustles by NDDC’s promise to pay Oguta youths stipends. The narrative is centered on their relationship with their Oguta and her people- how they come to fight against oppressors and imperialists like Papi (Paulcy Nnamdi Iwuala), Chief Mbanefo (Harry B Anyanwu) and Reverend Father Amadi (Ugo Stevenson). Nwelue is the director and executive producer of Agwaetiti Obiụtọ with Blessing Onyekwere as the producer as well as Blessing Uzzi for Blues & Hills Pictures.

Onyeka Nwelue is daring with this debut feature. Almost everything about it is daring. What I find most daring, however, is his choice of leads. Those whom the story revolves around are not the faces Nollywood is used to putting on Kene Mkparu’s I-MAX screens. Asides this, the directness of the cinematography is unmissable. There’s a great deal put into making the pictures tell the tale hand-in-hand with the brilliant narration. It could be argued that at maybe more than one instance, the narration could have taken a back seat, but overall, I find Nwelue’s use of narration quite reminiscent of the kind of oral tradition Igbos are known for. 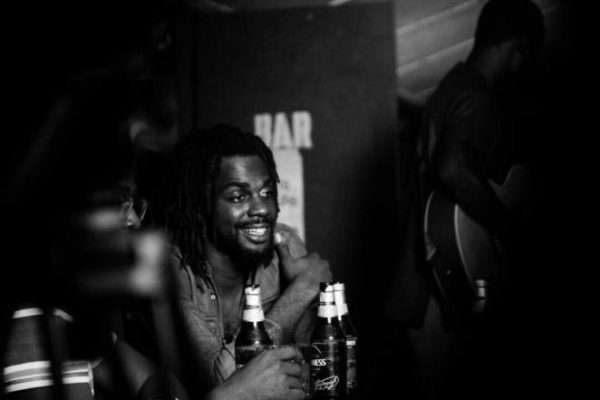 This film tries to address several social issues aside the main theme, or at least it puts them before the eyes of the viewer, with its brilliant play on subtle symbolism. There is the rich-fella/man-of-God relationship that has become quite bourgeois in reality as evident in the scenes featuring Chief Mbanefo and Rev. Fr. Amadi. The pentecostal miracle worker and his relationship with his fortune and healing-seeking congregation is a sad reflection of the Nigerian religious climate. The hypocrisy of it all is in him consulting the local priestess for powers and returning to give “testimony” of how the miracles he wrought with them have become the talk of the town.

There is also the overplayed excitement among the three town ladies when one of them comes to announce NDDC’s sad stipend to her friends. In addition to these, there is also Bugzy who insists on making trap music in Lagos despite neither having an audience for it, nor making good money from it. But amidst the good intention of Agwaetiti Obiụtọ to tell the sad tale of the huge gap that exists between those whose duty it is to make decisions to provide the basics for the people and the people who have given– via their votes and all – the decision makers the authority to do so, this film lacks a lot in the area of eliciting the intended empathy. And the story gets the blame.

The story does not go deep enough into the lives of the main characters or even Oguta itself (in relation to the lack present in the environment) early enough, and at all in some cases, for the viewer to feel some sort of emotional connection to the needs of the individuals or even the town under the microscope. The film visits too many bus-stops and the passenger soon finds himself dizzy with unnecessary halts. The story is punctuated by more than a few unnecessary scenes and shots, and the heart of the story does not begin to beat until well over half of the film had strolled by the screen.

It is never a stroll in the park adapting a novel or play into a material for film and the likely holes that the story may fall into are quite numerous. Agwaetiti Obiụtọ is an adaptation of Nwelue’s novella, “Island of Happiness” and it doesn’t escape falling into several story adaptation ditches, some of them like the ones mentioned above.

Subtitling, while consisting of very good grammar and translation, isn’t aesthetically as good as the film’s picture. The colour chosen for the fonts–without a background–clashes way too often with the picture and the non-Igbo speaking viewers should brace their eyes for the strain relying on the subtitling to get to the heart of the film will bring. An editing error also appears somewhere on the 31-minute mark where the subtitling of the conversation between Chief Mbanefo and the man-of-God appears in a scene involving two very young lovers.

An AMAA nominee for his documentary House of Nwapa, Nwelue has, with this effort, witnessed an induction into the world of feature flicks. He needs to do better in becoming a resounding filmmaking voice but he’s not far away.