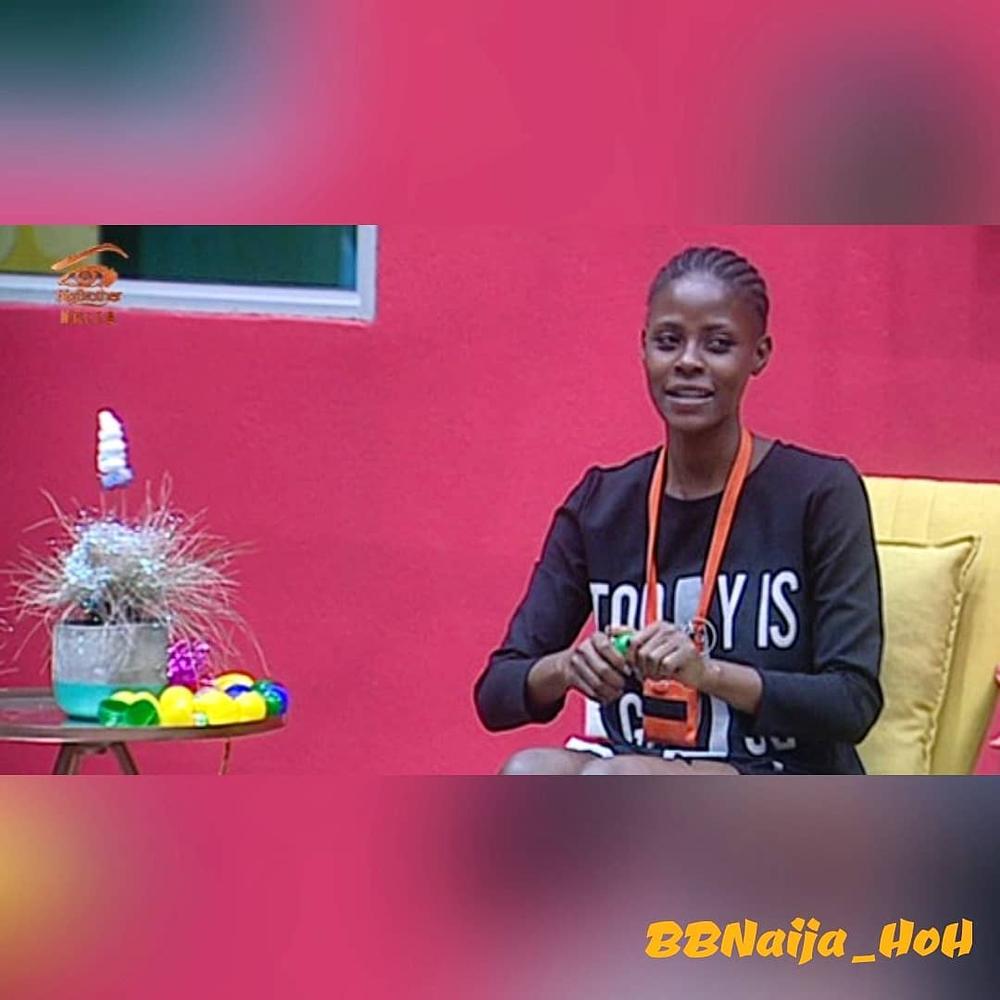 Did you watch day 66 of the Big Brother Naija 3 reality show?

This week’s theme revolves around home sweet home, and as if they were at home Housemates have received a Yes Task. Each one will have to open a card daily and comply with its instructions as the Task difficulties increase over the days. Knowing that the Task will affect their Wager, Housemates lent themselves to some hilarious feats.

To complete her share of the Task, Head of House Khloe had to apply make-up on her face as requested. Later in the evening, Cee-C who had found another card elected Rico Swavey for the Task of wearing his clothes inside out. It was quite comical but he was not the only one as Alex’s instructions to walk backwards for the rest of the day broke the House into laughter. When Anto’s turn came she had to execute a dance strictly for the guys, which by the time she was finished left the lounge spinning. Yet Miracle’s card instructions cracked Housemates ribs as he had to confess a major secret to a plant.

The Diary Session left Housemates hungry and they gladly refuelled in the kitchen. Since Biggie always looks after his guests, Tobi was delighted to run to the store room from where they found bottles of liquors to keep the night going. Since Teddy A and his bartender skills had exited, Miracle was left with pouring drinks into his peers’ glasses. Shortly after together with Tobi they plunged into the steamy Jacuzzi and were soon joined by Nina, Anto, Alex and Lolu. Khloe also joined in the fun but remained outside the tub, while Cee-C had called it an early night and was in bed.

Earlier in the day a fight involving Khloe and Anto about the number of portions the Head of House was cooking quickly turned into an uncontrollable situation when other Housemates got involved.

An advice from Tobi didn’t sit well with Khloe and she got agitated even more. The issue was interrupted by the game of cards which for most of the day it remained that way.

However, the issue was brought back to life when Khloe and Miracle revisited it. This time Miracle was trying to make her understand from his point of view but Khloe was hearing none of it. The conversation went on with Khloe speaking almost ninety percent of the time, but eventually they moved on from the issue.

The saying ’dynamites come in small packages’ has proven to be true when it comes to Khloe.

From day one she mentioned that she’s no pushover and that her straight forwardness has kept her in and out of trouble at times.

As a result of her undiluted mouth, this landed her in trouble because she was found to have disregarded the rules of the House and was let go.

However, Biggie’s mercy found her; she got an opportunity to rectify her mistakes and have the opportunity to show another side of her the viewers were never exposed to before.

As tiny as she is, Khloe has never struggled to put anyone in her place in the House and in her conversation with Lolu yesterday she vowed to keep her emotions intact as she doesn’t want to ever be in the situation that she landed herself in before.

She adds that her character and loudness has somehow been misunderstood in the House but in her efforts to make them see her point of views she struggles.

Given the opportunity to tackle an issue head on, the choice of tone and words she uses sometimes tends to come out the wrong way hence other’s might not get what she’s trying to put across.

However, she has on a number of occasion said that many people tend to confuse what she saysand what she means only because she’s loud.

Do you think that’s the case as Koko is concerned?

Looking back to the early stages of the game, Tobi, who had found a companion in his fellow Housemates Cee-C, might have looked as if he had lost his game plan as soon as the relationship commenced.

However, things quickly took a turn for the better for him when the grapes turned sour between them as his time and focus was back on the prize.

His relationship with Cee-C was one dimensional from the get go and frequently she had him eating out of her hand. Like a lost puppy, everywhere she is, you’d find Tobi until reality hit him and his sense came back.

From there the curse was broken, the more lively and friendly Tobi, which we were introduced to in the beginning of the show was back.

Taking no time to weep and feel sorry for himself, he quickly brushed himself up and carried on with life as if the hurt was never there.

There were days where the duo would go back and forth trying to sort their issues but that never went anywhere and it was clear that Tobi was tired of their cat and mouse games.

The day he remembered what’s at stake, he reminisced and confided to his other Housemates that his realization had come just in time and he wasn’t going back. He meant what he said.

Sometimes there would be insults thrown at each by Cee-C and Tobi, especially after the Saturday parties which was starting to become a norm.

However, the Tobi we see now just lets everything pass as if it’s not directed to him. The strike he received from Big Brother was his wake up call.

The birth of ‘Tolex’ and ‘Toracle’ came along and he’s since been closer to Alex and Miracle in the House whom he’s confessed that they are the only people he knows has his back in the House.

His experiences in the House have moulded him to choose his battles wisely and that’s the advice he’s chosen to live by.

When it comes to Big Brother and his tasks no one can ever anticipate what he has up his sleeves and the Yes task is no different.

The Housemates seem to enjoy the random sounds of the buzzer going off even though the moments of the task are short lived from their side.

Chat To Me, Couch

Alex’ hilarious moment with the couch was the highlight of the day. She sat straight up with poise ready to engage the couch and only wished it could talk back.

She did though have an interesting chat even though the couch only listened. She told it of how unfair they treat it and how the don’t appreciate its presence in the House.

Additionally, she made it aware that the Housemates were disturbed but unfortunately for her the couch only borrowed her its ears.

Anto had it easy when her task card required her to wear socks on her hands. Unfortunately the brief from the card wasn’t specific as to how long she should have her elbow-high socks for.

Soon after she got bored wearing the socks she took them off and the Housemates went out to the garden to enjoy the sun.

Adding to the funny moments of the task, Tobi’s card required him to shout whenever he’s speaking. As painful as it was on the ear, it was one of the funniest moments the task has produced.

After, it was games, dancing and make up for the guys in the Big Brother Garden and the Housemates took it to themselves to kill boredom.

Yet another round of diary session swept through the House and as per normal, the Housemates bore it all, leaving nothing to guesswork. Big Brother’s questions varied from how they felt about redesigning their spaces, their thoughts about the ‘Yes Challenge’ and what they’d take back if given the chance to turn back the hands of time. While the other Housemates’ responses were within the limits of the questions’ contexts, Rico Swavey, Khloe and Cee-C gave a little more.

Rico Swavey, Not quite There

For a while there, it looked like Rico Swavey had been a bad boy and lost his place in cupid’s good books because of all the men in the House, he’s the one to have feasted on rejection the most, failing to land even a kiss. His luck seems to have been renewed though because Khloe’s gaze landed on him and it’s obvious that she feels some type of way.
Rico Swavey’s response to Biggie’s question regarding what he thought Khloe wanted from him was a clear reflection of his lack of interest; highlighting that he knew very little about her and was therefore not interested in having an intimate relationship. Seeing as he’s always shunned trouble, it looks like his feeling towards Khloe might be clouded by the fact that she seems to a ‘quarrel gene’ carrier.

They Didn’t Want Him But I Do

Khloe on the other hand is adamant in her pursuit for Rico Swavey’s affection and judging by the fact that she’s watched him being curved numerous times, it wouldn’t be careless to assume that she returned on a mission to prove that someone did want him. She told Biggie that given a chance to turn the hands of time and change an event, she’d trade K.Brule for Rico Swavey because of his maturity. Besides her Diary session confession, her sharing a bed with him and later choosing him to enjoy her HoH niceties instead of returning the favour to Tobi proves that this is beyond strategy, she’s into the boy.

It’s My Fault, I Know

This could easily be listed as Cee-C’s most selfless diary session thanks to her admission of blame. When Biggie asked if there was anything she’d change given the chance, she vulnerably mentioned just how empty she feels sometimes and said she’d wasted too much energy trying to build a friendship with Tobi and almost totally disregarded the other Housemates.; highlighting how she’s been too hard on Tobi and failed to understand him due to being too focused on herself. Seeing as she’s ridden solo for most of the season post Tobi, the loner in her seems to want company and based on her openness, she deserves another chance at it. We’re wondering if the other Housemates will let her.

Have you been watching? What did you think of the Day 66 activities?