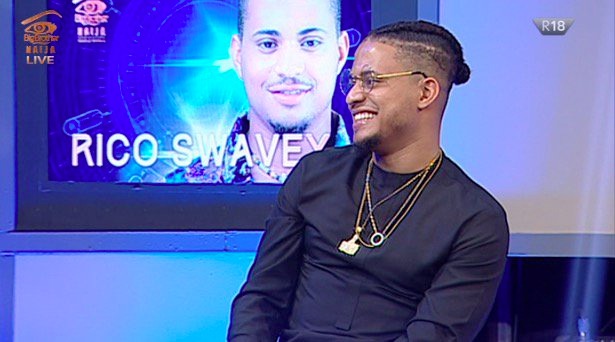 Did you watch day 70 of the Big Brother Naija 3 reality show?

After showing so much fun and unity in the party, the Housemates came back and the food fights started again. Unlike the typical shouting and calling each other, this time a lot of shade was thrown and the ears that were supposed to have received the shade, did.

Alex has been for a long time, according to her, been quiet about instances involving the Housemates wasting food. She told Tobi that ‘since they’ve been back they have been wasting food and that’s not ok’ to which Anto quickly defended herself saying she has no business fighting for food.

What Alex said hit at home with Rico Swavey and it didn’t sit well with him. For the first time, Rico voiced out how saddened by this issue because he knows he’s one of the people who like cooking in the House.

Cee-C was the first to advise him to stand up for himself and not let shade get to him. She added that she too has been a victim of the Housemates talking behind her back and that she hopes they leave the House with the prize.

Meanwhile, Tobi advised him to let the issue go and in not so many ways pointed out that the culprit was the Head of House, Khloe.

The Game has stiffened considerably lately and the Housemates have been left to fend for themselves and dodge shots completely invisible to them. Thanks to last week’s Eviction twist that saw the unanticipated end of BamBam’s journey, followed by Teddy A’s exit, the Housemates have had to hold on for dear life. It wasn’t all dry leaves and thorns though because Biggie managed to add some sugar, spies and all things spice, on the week that was.

The Housemates’ early mornings went 360 thanks to Lawrence’s presence. After weeks of lazing around and only really exercising when the stars aligned, Biggie’s new introduction left the Housemates very uncomfortable to say the least. Thanks to Easter graces though, the Housemates were able to sweeten up during the egg hunt that saw Khloe hopping onto the HoH chair, further stiffening the game’s cords. Talk about bittersweet symphonies; more so on Miracle’s end of the stick as he was put back into the Nomination pull, after escaping narrowly.

More twists that saw the Housemates almost completely occupied were introduced. The Yes Challenge was probably one of the most interesting as the Housemates were thrown in and out of their comfort zone, remember how Alex went on a dolling spree and turned the guys into her personal mannequins? On the brighter side of things, after Biggie’s disciplinary hearing, following Cee-C’s dress cutting episode, the Housemates were allowed to let out their inner creatives by redecorating their personal space. All we can say is, body parts were canvassed.

The week was sweetened further when the Housemates managed to bag their Wager, despite Biggie’s unconventional trialling methods; and for the umpteenth time, Miracle banked the Million during the Payportes games. With an Anto and Lolu kiss, as well as the party to seal the deal, what more could the Housemates ask for?

Near The Finish Line

All of the Nominated Housemates walked up to the Diary room with a heavy heart. In full awareness of their possible Eviction, they all confessed to feeling nervous at the prospect of leaving the House. Yet Biggie wanted to pull the strings a little bit tighter and asked them who they thought shouldn’t see the end of the game. Answers came forth in two categories – those who counted themselves in and those who didn’t include themselves in the finalists.

Funnily enough, only Alex and Lolu named themselves among those who should make it to the Finale. Alex for instance also added Tobi, Anto, Nina and Miracle whom she said were the most authentic. In her no nonsense approach, she confessed that the rest of the House annoyed her to no end. Lolu on the other hand believed that Rico Swavey, Alex, Tobi, Anto and himself should be the last to leave the House. In his opinion, Nina and Cee-C shouldn’t make it to the end.

Likewise, Nina returned Lolu’s favour as he was the only Housemate she said she didn’t understand one bit. However she also was of the opinion that Alex, Miracle, Tobi, Anto and Rico were cool and real enough to make it to the end. Like Nina, Cee-C, Miracle and Rico Swavey seem to have volunteered others ahead of themselves for the finishing line. Cee-C beat around the bush for a while before stating that Tobi and Alex didn’t deserve to see the end of the show. Miracle didn’t waste a minute and believed that based on merit Tobi, Nina and Anto shouldn’t leave just yet as opposed to Cee-C.

For Rico Swavey, it is Anto who deserved to get to the end, for they shared similar upbringings. Yet Rico felt that besides what he described as Miracle’s ‘flying propaganda’ he had never heard Miracle talk of other things, and with the edge Miracle already had, Rico believed that a Miracle win would be unfair on all others.

Rico Swavey is the latest Housemate to have been Evicted from the Double Wahala House.

When BBNaija presenter Ebuka called his name through the television monitor, Rico remained equal to himself and took the news without flinching. Rico has always been known by his remarkable emotional restraint, and tonight was no different. In the lounge, all remaining eight Housemates came closer to him for one last hug, and one by one he hugged back, received and gave friendly taps before Tobi and Lolu escorted him to the elevator. Rico’s exit will probably be remembered as a wahala-free departure, for no tears or shouts or fainting the likes of which we had seen in the House previously accompanied the news.To the contrary, sensing their own end near, Housemates seemed to have swallowed the bitter pill without blinking.

By the time host Ebuka welcomed Rico Swavey onto the BBNaija stage, he was visibly filled with emotion, as evidenced by the largest grin ever could barely mask. As Host Ebuka started grilling him with questions from viewers on his love interests in the House, Rico didn’t hide that Ahneeka was the Housemate he had wished to get closer to. Yet the biggest blow came when he was shown footage of the last Nominations that revealed that it was Alex and Anto who had put him up for Eviction. Rico would have never suspected that the same Anto he just earlier in the day said should stay until the end was capable of dropping him like an old sock. Besides, that Alex also Nominated him left him speechless for she has been the subject of his desire in the House.

Have you been watching? What did you think of the Day 70 activities?