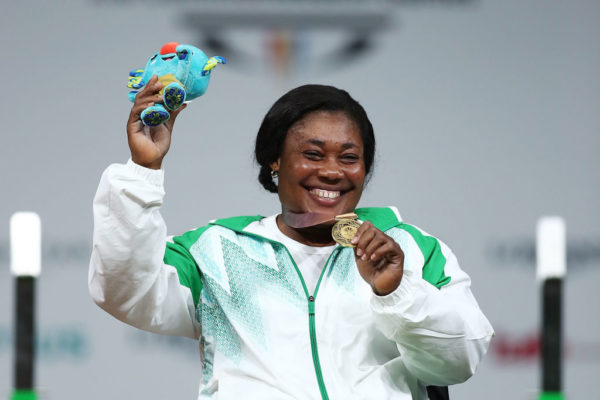 GOLD COAST, AUSTRALIA – APRIL 10: Gold medalist Ndidi Nwosu of Nigeria poses during the medal ceremony for the Women’s Heavyweight Final during the Para Powerlifting on day six of the Gold Coast 2018 Commonwealth Games at Carrara Sports and Leisure Centre on April 10, 2018 on the Gold Coast, Australia. (Photo by Mark Metcalfe/Getty Images)

Team Nigeria is on a row in powerlifting in the Gold Coast 2018 Commonwealth Games in Australia.

The team won 3 gold and 2 silver medals in the sport, shooting Nigeria to number 10 on the medals table.

According to Complete Sports, Roland Ezuruike lifted 224.3kg in the men’s para powerlifting lightweight event to clinch the gold medal.

Having saved Nigeria’s blushes at the London 2012 & Rio 2016 Games, the country’s powerlifters once again came to the rescue of the nation at the ongoing Commonwealth Games in Australia, as Roland Ezuruike claimed Nigeria’s first GOLD medal of the Games. https://t.co/ymXUZa0NyB pic.twitter.com/al21nSWBFl

His compatriot, Paul Kehinde, the defending champion, settled for the silver medal with a lift of 219.9kg.

Esther Oyema set a new world record when she lifted 141.6kg in the women’s lightweight event, winning the gold medal.

Lucy Ejike, with a lift of 134.1kg, claimed the silver medal.

In the women’s heavyweight, Ndidi Nwosu lifted 110.4kg to win the gold medal.

OAU responds to Sexual Harassment Allegation against Its Lecturer

We Need a Place where People can be Vulnerable & not Judged! Join in to Build this Emotional & Mental Health Walk-in Centre