Niyi Ademoroti: Why Eunice Atuejide's Comments on Feminism are Just Sad and Tired 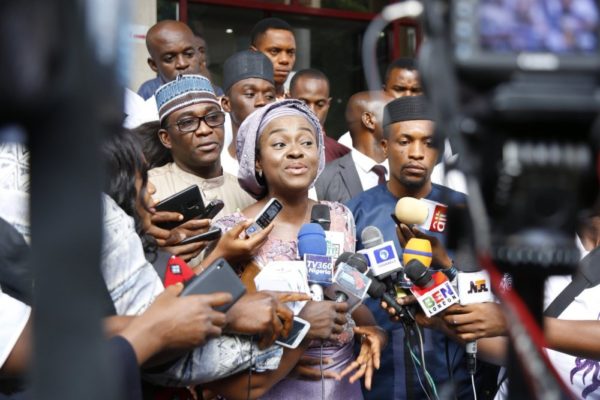 In the most basic sense, feminism is hinged on the ideology that men and women are equal, and should be afforded the same opportunities.

How is this so difficult to understand?

Maybe we should expect it from men (after all, people are seldom willing to give up their privileges), but what about the women who have come forward to denounce feminism outrightly? How do you firmly stand against an ideology that benefits you?

Too many people have said that while they believe in the equality of the sexes, and want women to be afforded same opportunities, they refuse to be identified with feminism.

Most recent is a Nigerian presidential aspirant Eunice Atuejide, who, on her Twitter, has made it very clear that she isn’t a feminist.

Again, I'm not a feminist!
I actually hate it when people call me feminist because that word means too many things, many of which I DON'T LIKE!
EVERYONE should have a fair chance.
Be yourself and be treated right being yourself
So guys, lets caption this picture!#ANigeria4All pic.twitter.com/JPJkebOU3W

Well, the truth is, in Nigeria among many other places, being a feminist comes with some flak.

The word feminist, in several circles, is a “bad” word. To them, it describes a woman who refuses to acknowledge the physical differences between the sexes. A woman who disrupts the order created by God. A woman who wants to take a man’s place in the society (and the home).

I'M NOT A FEMINIST!
Na by force?
And who is a feminist?
My friend who won't cook for her husband & kids cos of equality?
The one who always insults men bcos she can? Ladies who won't let men hold doors for them cos it diminishes their value? What does feminism mean?#ANigeria4All

And no one wants to be seen as that- especially in a country like Nigeria where religion is the driving force of the community.

But, the misconstrued belief of what feminism is, is far from the truth of what it is. A quick and proper research of what feminism is will provide accurate information. Those who are truly interested in understanding the principles of feminism and the different intersections that exist within it, know that knowledge is easily attainable.

Feminism recognizes the difference between the sexes, while insisting they should be given equal respect.

Feminism focuses on the empowerment of all women (and is called feminism) because it is the women who have been more disadvantaged in our society. Feminism encompasses the elevation of the rights of all women (class, races and sexuality notwithstanding)

Let’s take politics for example. Do women in politics have the same access as men? Or do we (automatically) set different standards for women? 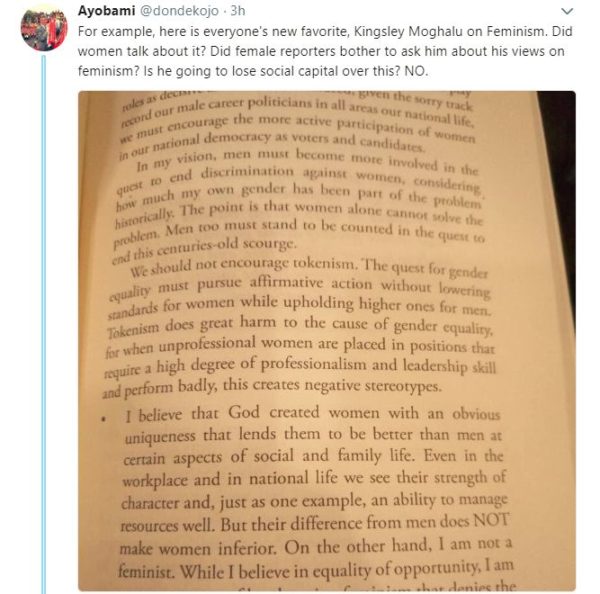 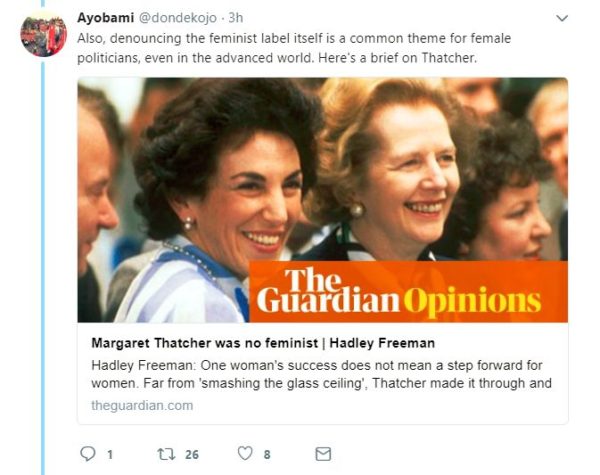 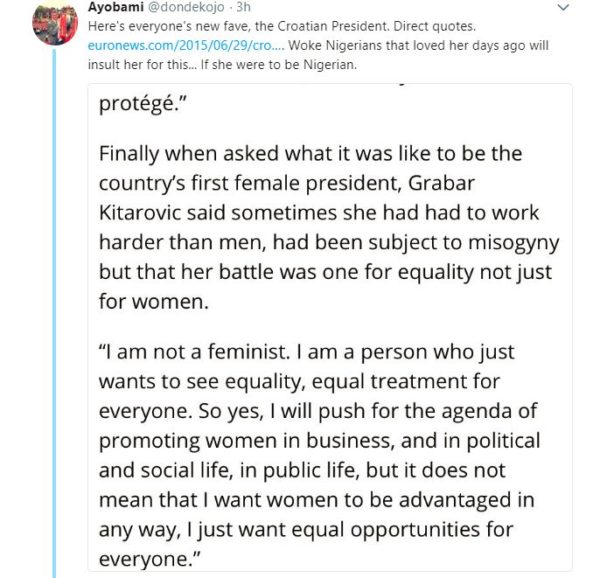 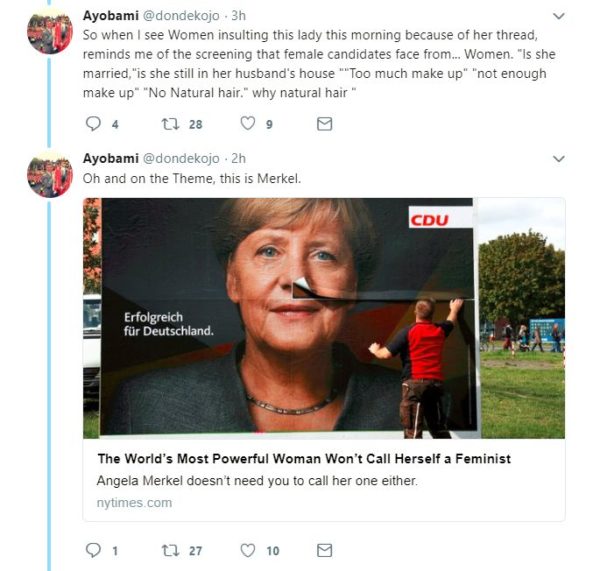 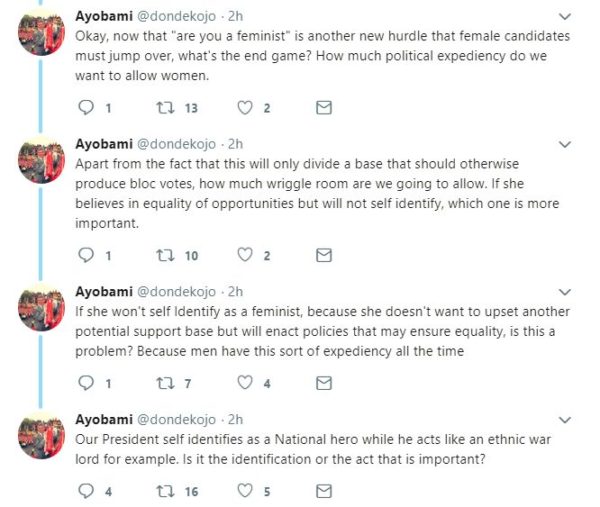 The entire idea of feminism is that the standards set for men and women in all aspects are the same; that women get just the same amount of flak (or praise) as men when they do or say the same things. Simple. It’s crazy that this still needs explaining.

If you believe that men and women should be given equal opportunities in the society, that’s all it takes to identify as feminist. Equality and equity.

Rejecting a label, when you agree with its core ideals, because of extremities is cowardice by the way.

Eunice Atuejide’s tweet came with the condemnation of the fact that the 2019 presidential aspirants who formed a coalition on Tuesday were all men, that female aspirants like herself, Elishama Ideh and Remi Sonaiya were not invited to sit at the table – that itself is a feminist stand.

That she and the other women can even run to become president of a country (and that women today can vote) is due to the hard work of the feminism she casually condemns.

It really is sad that Atuejide misunderstands what feminism is. (And the entire washing plate argument is too tired, can we, please, retire it?)

#PVCitizen: You can now Register on Weekends!