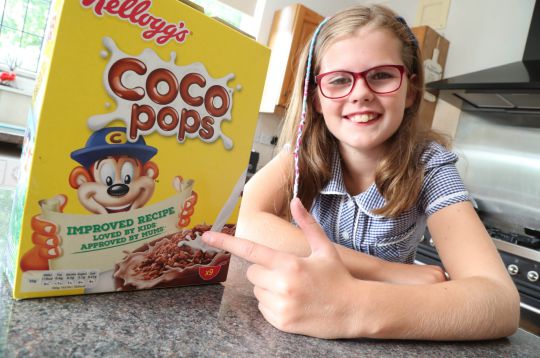 Hannah-Marie Clayton with a pack of Kellogg’s Coco Pops

It really is the little things that come together to change the world.

A 10-year-old girl Hannah-Marie Clayton has gotten cereal maker Kellogg’s to change an old slogan she described as ‘sexist.’

Hannah-Marie, who is often served breakfast by her dad James while her mum Anne-Marie leaves home early for work, thought the Coco Pops slogan “Loved by kids, approved by mums” a little odd.

So, according to Metro, she wrote to the cereal company letting them know she found their slogan ‘sexist.’

Kellogg’s wrote back, letting her know that they would be changing their boxes, and the boxes will now read “Approved by parents.”

My mum was away so I was just with my dad when I saw it on the cereal box.

It made me think that dads should be included as well because they are important too.

Also some people don’t have a mum and they might find it upsetting.

Awesome, how at such a little age she’s already effecting change.