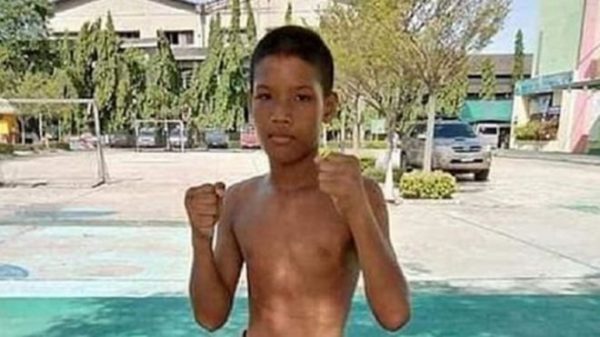 The death of 13-year-old Anucha Thasako has led people around Thailand to mount pressure on the government to ban child boxing.

Thasako, according to the BBC, has been fighting in the ring since he was 8 and has been in 170 bouts.

Thasako and his 14-year-old opponent had not been wearing protective headgear during the fight, and Thasako got repeated knocks to the head before falling to the floor.

Thasako’s opponent, Nitikron Sonde, wrote on Facebook that he was saddened by the death.

I regret it. But I have to do my duty to win so I can make enough money to sponsor myself through education.

Thai Boxing, known as Muay Thai, is incredibly popular in the country and children are known to get involved in the sport very early in a bid to support their families.

People in the country have been calling for a reform, with the Thai parliament currently drafting a law that would ban children under 12 from fighting in Muay Thai matches.

The draft, if passed, will require those aged 12 to 15 to be registered, have the permission of their parents. and wear protective gear for professional fights.

EFCC has become a department in APC – Samuel Ortom

Lagos Government permits use of Hijab in Schools