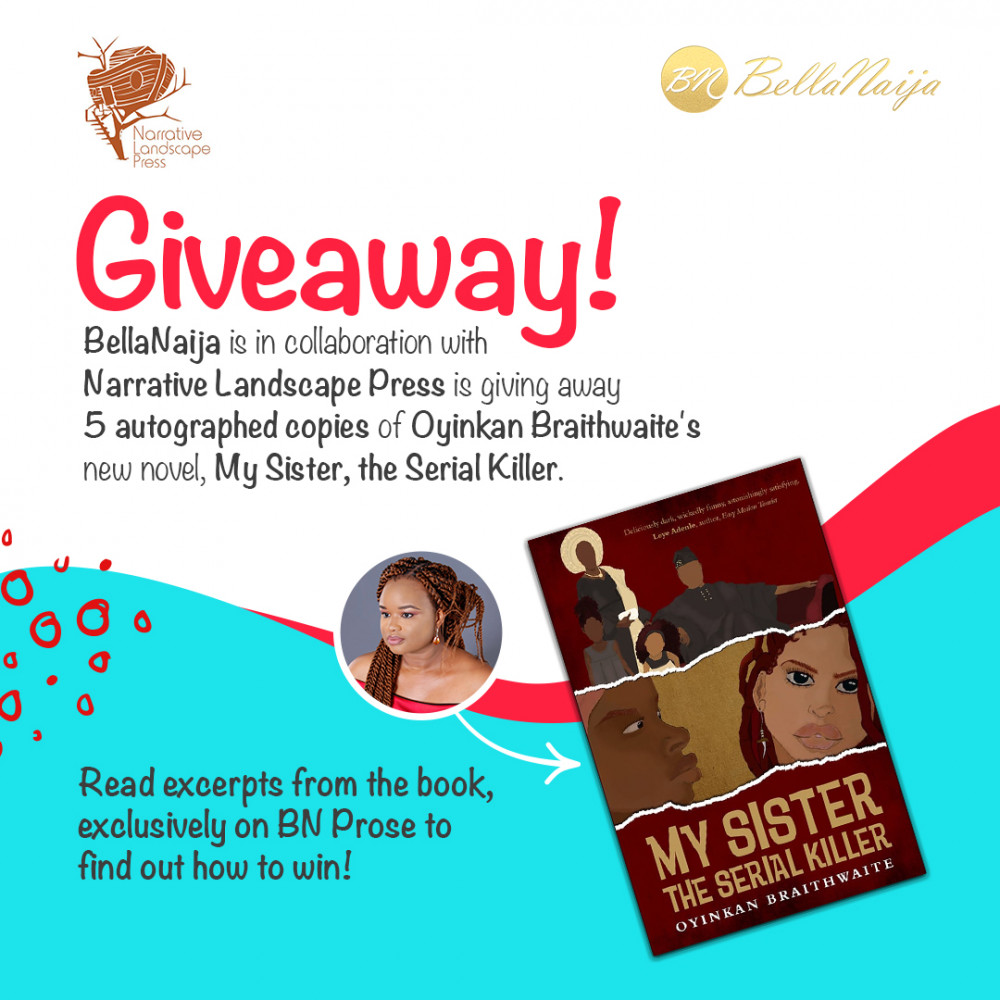 This November, BellaNaija is proud to announce a partnership with Narrative Landscape Press, to bring you excerpts of Oyinkan Braithwaite‘s new novel, My Sister the Serial Killer.
Every Tuesday this month, we will publish excerpts from the book, and at the end of the series, we’re giving out five copies of My Sister the Serial Killer.  Click here to read the first , second and third excerpt from this giveaway series.

This is the fourth and final excerpt, so if you’ve been following BN Prose this month, stay tuned, because we’re going to run the quiz any day now. Remember, only people who’ve been reading dedicatedly will get a chance to win a free copy. We hope you enjoyed the little glimpses of this book as much as we have and can’t wait for you to read the whole book.

“Dr Otumu states that he acted in self-defense and that you can verify this. He says, and I quote: ‘She warned me that Ayoola had killed before.’ Ms Abebe, has your sister killed before?”

“What did you mean when you told him that your sister had killed before?” My interviewers are well spoken and well educated. But this comes as no real surprise. Tade is a talented doctor at a prestigious hospital, Ayoola a beautiful woman from a “good” background. The case screams “high profile.” My hands are resting one atop the other on my lap. I would have preferred to place them on the table, but the table is grimy. There is a faint smile on my lips because I am humouring them and they should know that I am humouring them—but it is not enough of a smile to suggest that I find the circumstances at all humorous. My mind is clear.

“A man died of food poisoning on a trip with my sister. I was angry that she went with him, because he was married. I believed their actions led to his death.”

“What of her ex-boyfriend?”

“Femi; the one who went missing.”

I lean forward; my eyes light up. “Has he come back? Has he said something?”

I frown, lean back and lower my eyes. If I could, I would squeeze out a tear, but I have never been able to cry on cue.

“So why do you think she has anything to do with that?”

“A hundred suspicions don’t make proof. She is five-two. What the hell do you think she did with him, if she hurt him?” My lips are firm, my eyes disbelieving. I shake my head slightly for good measure.

“So you believe she may have hurt him?”

“No. My sister is the sweetest person you’ll ever meet. Have you met her?” They shift uncomfortably. They have met her. They have looked into her eyes and fantasised about her. They are all the same.

“What do you think happened that day?”

“All I know is that he stabbed her, and that she was unarmed.”

“He said she brought the knife with her.”

“Why would she do that? How could she know he would attack her?”

“The knife is missing. Nurse Chichi states that she logged it in after it was removed during surgery. You would have known where it was kept.”

“How long have you known Dr Otumu?”

“Have you known him to be violent?” When I was picking my outfit, I chose a light grey skirt suit. It is solemn, feminine, and a subtle reminder that the police and I are not from the same social class.

“I believe I just said I’ve not known him very long.”

Muhtar has gone home to begin his life anew. Room 313 is empty. I sit there anyway, in the spot I usually sat when Muhtar was still in the realm between life and death. I picture him on the bed and I feel an intense sense of loss, more so than the one I feel for Tade, who is also gone.

They had his license revoked, and he has to spend a few months in jail for assault. It could have been much worse, but many attested to the fact that he was kind and had never displayed a whit of violence. Still, there was no denying the fact that he stabbed Ayoola. And for that, society demanded that he pay.

I haven’t seen him since the day it happened. He was placed on suspension as soon as she accused him, so I don’t know what he is thinking or feeling. But I don’t much care. She was right. You have to choose a side, and my lot was cast long ago. She will always have me and I will always have her; no one else matters.

Muhtar gave me his number. He wrote it on a piece of paper that I put in the pocket of my uniform.

I still toy with the idea of telling Ayoola that there is someone out there, free and unconstrained, who knows her secret. That at any point, the things we’ve done could become public record. But I don’t think I will.

The linen used for Muhtar’s bed has not been changed. I can tell. I can still smell him in the room—that freshly showered smell he sported in those days of consciousness. I close my eyes for a bit, and allow my mind to wander.

A short while later, I pick up the room phone and dial the number for the fourth floor.

I have keyed in his number three times and I have cleared the screen three times. The paper where his number is written is not as smooth as it once was.

But I am already beginning to forget what his voice sounds like.

There is a knock on my door.

The housegirl opens the door a crack and sticks her head in. “Ma, Mummy says I should call you. There is a guest downstairs.”

I dismiss her, realising she can’t tell me more than that.

She closes my door and I stare at the slip of paper with Muhtar’s number on it. I light a candle on my nightstand and hold the paper over the flame until the numbers are swallowed by blackness and fire licks the tips of my fingers. There will never be another Muhtar, I know this. There will never be another opportunity to confess my sins or another chance to absolve myself of the crimes of the past . . . or the future. They disappear with the curling paper, because Ayoola needs me; she needs me more than I need untainted hands.

When I’m done, I walk to the mirror. I am not exactly dressed to entertain guests—I’m wearing a bubu and a turban—but whoever it is will have to take me as I am.

I take the back stairs, pause before the painting. I glimpse the evanescent shadow of the woman, and for a moment it feels as though she watches me from a vantage point that I cannot see. The frame is tilting a little to the left; I correct it and move on. Our housegirl scurries by me carrying a vase of roses—the go-to of the unimaginative; but I guess Ayoola will be pleased.

They are in the living room—my mum, Ayoola and the man. All three of them look up at me as I approach.

“This is my sister, Korede.”

The man smiles. I smile back.
***
Oyinkan Braithwaite is a graduate of Creative Writing and Law from Kingston University. Following her degree, she worked as an assistant editor at Kachifo, a Lagos-based publishing house, and has been freelancing as a writer and editor since. In 2014, she was shortlisted as a top ten spoken-word artist in the Eko Poetry Slam, and in 2016 she was a finalist for the   Commonwealth Short Story Prize. She lives in Lagos, Nigeria.Buy your copy of My Sister, The Serial Killer HERE.

#GrowOnlinewithChinny: Top Brands like Coca-Cola, KFC & Yellow Tail are showing Us that it’s all about the Customer

Your Better Self with Akanna: Improve Your Mood with These 2 Magical Words