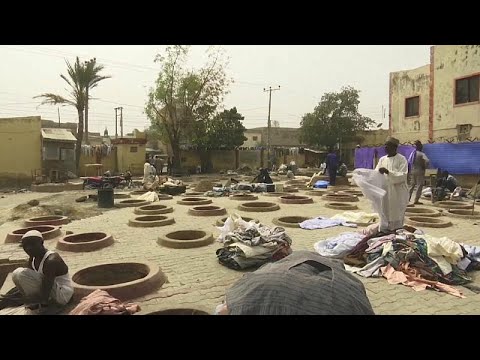 Workers in the dye pits of Kano, an ancient city in northern Nigeria are calling on the government to do something about protecting the tradition, as well as keeping their jobs.

They complain that many young people have abandoned the dye pits and move to cities to look for jobs.

Not just that, they complain that the textile industry is being undercut by importations from China.

One dye pit worker Lawan Ismailu told Euronews: “We sell our clothes for 5,000 (Naira), while the Chinese are selling at between 1,000 and 2,000 Naira. The Chinese products look similar to ours but are not of the same quality.”

“The government should not allow the Chinese to dump their cloth here because in any country you can see their cloth. They have young people with superior technology which is not available to us,” Ismailu said.

“Here, we do not have sufficient technology because our government is not supporting us in retaining our idea, they normally forget us. Everything has been spoilt,” he added.

The negative impact of the Chinese imports is not just economic, but cultural, said Idayat Hassan, director of Nigeria’s Centre for Democracy and Development.

“Most of the textiles are brought from China into the market and this is not only taking away [from Nigerian] markets, it’s also [that] the quality of the products are not as good. So this is eroding culture, it’s taking away markets, it’s increased unemployment,” she said.

Hassan said that the presence of the Chinese in the Nigerian market is “both a blessing and a curse”.

“When you look at the infrastructure development for reasons that this government is laying claim to, you find that it’s a result of the loans that they have actually received from China. So you see a lot of improvement in the rail transport in the country, several parts of the country now are easily accessible by rail, unlike previous years,” she added.

Related Topics:kanoTextile Trade
Up Next