BN Book Excerpt: My Name is Aisha by Toluwalola Kasali 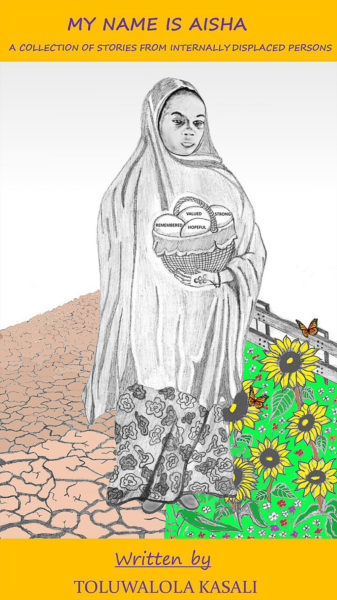 “I had a home, friends, family, education, and a community – one day, all of that changed,” -Aisha

It started off as a typical day in Gwoza, a local government area in Borno State, North-East Nigeria, the rocky and hilly terrain providing beautiful scenery. My parents were home, and my siblings were playing outside as usual. I was washing my clothes inside the house when I heard gunshots.

I called out to everyone, and we tried to see what was going on. That was when we noticed men moving into our village in large groups. At first we thought they were soldiers who had come to protect us because they came in trucks, but later we realized that the gunfire was coming from Boko Haram militants who were engaging soldiers in battle. Everyone was running, and we knew it was no longer safe to stay in the house.

I left with my siblings and parents; we ran to the hills and stayed there hoping that the militants would retreat, but they did not – they had taken over our town. They killed our men, destroyed our property, farmlands and went away with valuable items.

Living in the mountains, we ran out of food and water and survived by eating dry guinea corn and millet. It was not long before we realized that we would not survive much longer if we continued to stay, so we decided to leave the village. We had heard of people being killed as they tried to flee town, but we were left with no other choice.

We left in the rain carrying only some of our belongings and followed a path that had some people on it. We dressed my brothers in female clothing and covered their heads because if they were identified as male, they would have been killed. We helped to disguise many other men, but some of them were discovered and killed. My brothers were able to escape. We were stopped twice along the way by militants; they collected our identity cards, phones and the little money we had, and we were allowed to continue our journey. At some point they started chasing us. We ran for our lives.

Many men were killed, and some died of hunger while hiding from the militants. Young girls and women were taken away. Finally, we got out of the village trekking by foot from Gwoza to Madagali, a local government area about 15 miles away in Adamawa State. We were tired, thirsty, hungry and dirty. Our feet were swollen and pierced by thorns. We stayed there for two days and did not have money to continue our journey.

Later, a bus was sent, and we were brought to the Internally Displaced Persons (IDPs) Camp in Area 1, Abuja. The story is not very different for many of us. My family and I have been displaced since 2014.

It was hard to understand why this happened to us – we did not choose to be here. We were faced with our new reality which was hard to accept. Everyone had lost someone or something they loved dearly in the violence, and many of us had lost the zeal to go on with life. Here we were, several miles away from home and expected to start all over again. When I first arrived in the camp, I had nightmares about people that were killed. Our town was destroyed and the women were left to bury the dead.

Those images keep playing back in my mind.

“I came to the camp depressed and very sad because I lost my sons and husband. I also developed high blood pressure. I hope to learn skills that will help me earn a living.”
– Binta

“I lost my brother in the crisis, and my father died because of what happened to my brother. I live in fear and cry sometimes. I am trying to let go because thinking gives me problems.”
– Zainabu

“I lost my husband and this has caused me pain and sleepless nights. I worry about what my two children will eat. I find solace in sitting with my neighbors and talking. I also pray.”
– Mariam

“I moved to the camp with my parents and five siblings because of the insurgency in Maiduguri. I am no longer in the crisis, and this makes me very happy. This means I can now go back to school and learn.”
– Elizabeth

“I came to the camp because of the crisis in Maiduguri. Now, I need to be empowered – we need people to help us. Currently, I sell fuel in liters to people around the camp. I also run errands for the camp leader.”
– Buba

“I lost my parents, and I have not had a job since I came to the camp. I have nothing to do.”
– Hamza

“We were living peacefully in Gwoza before Boko Haram arrived. I was able to escape, but my father and brothers were killed. My friend was taken away into the forest – I still don’t know if she is dead or alive.”
– Hafsatu

Connect with the author: My Internally Displaced Persons

Gabriel Olatunji-Legend: Are You Eligible for Marriage?