Ife Shares What it's Like to Be Raised by a Feminist & Be Married to One, on My Partner Is a Feminist

Ife, a management consultant with a PhD, shares what it’s like to be married to a feminist. 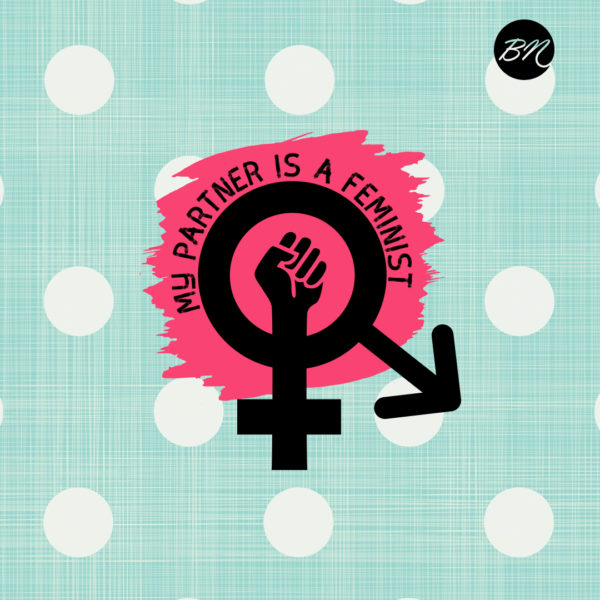 Growing Up a Feminist

I believe my mum is a feminist and her father (my grandfather), too. For context, my mum is one of 62 children, and my grandfather had more females than males. My grandfather was the first man in my hometown to send a female to school. He was also the first man to buy a female a bicycle before she was eighteen. These two points are important, as it highlights my grandfather’s thinking back in the early 1900s, where females were more or less seen as second class citizens whose destinies were just to raise kids and cook for their husbands.

My grandfather gave all his daughters the same opportunities as his male kids, something that was quite rare in his time. As a result, my mum and her siblings grew up to be strong, somewhat opinionated women, who never believed gender was a barrier to achieving their dreams. Although their idea of feminism was more about participation rather than fairness, and by participation, I mean being involved in things regardless of their gender.

My dad, on the other hand, was brought up in what you can describe as the traditional way, in fact, his mum (my paternal grandmother) was withdrawn from school after standard 6 (the equivalent of primary 6), as her father didn’t believe in girl child education.

I think growing up under the dynamics of my mother and father influenced my choice of a partner. Unconsciously, anyway. My mum, being from a big family, didn’t have loads of friends. Her sisters (who were also feminists) were mainly her friends. As a result, my cousins and I never saw gender as a barrier to achieving anything in life.

Laziness was our only explanation for not achieving one’s dreams. I believe this upbringing unconsciously conditioned us in a way, that we were mostly attracted to people considered feminist.

I think I am very lucky to have the parents I have. I never knew being a woman was a disadvantage until I got to university. My father supported every dream of my mother and I think we are better off for it as a family. Although my dad wasn’t very hands-on, he never denied my mother any life or career opportunity.

By the way, I’d define feminism as fairness in every opportunity life has to offer.

I met my wife at the university and we dated for nine years before getting married. She comes from a different background. Her dad is a professor and her mum a homemaker. Her paternal grandmother is a feminist, and she takes very much after her grandmother. She has strong opinions about things and likes to debate until we reach a decision. I can’t remember us having conversations about fairness in opportunities while dating. I think it was sort of assumed, based our personalities and upbringing.

I always knew she was a feminist. I honestly don’t think we would be together if she wasn’t a feminist. Feminism to me is more about naming the problem about gender disadvantage to life’s opportunities.

I’m not sure we shared the same definition of feminism, though, but I think we do now. I think for the longest time, she was just angry that her mother made her cook for her brother all the time, and he saw it as a right.

Being Married to a Feminist

As I said, I don’t think we’d be together if she wasn’t a feminist. I grew with a feminist mother, so fairness was ingrained in me from a young age. So my wife and I share house chores and child care; we understand our job pressure and adjust our schedules accordingly; we both contribute to our financial goals since we both work; and we have assets in both our names regardless of who is paying for it. I think the only downside to everything is how I can’t make rushed decisions. We discuss every decision that impacts us both, which is everything.

A very interesting story I have involves moi-moi. My wife hates cooking on Sundays, as she believes that’s her only day of rest. She would rather sleep late on a Friday to sort out cooking for the month. My mother recently came over to help with our son, and my mum loves moi-moi. One Sunday after church, my mum turns to my wife and tells her there was no moi-moi left in the house. My wife was already dreaming of sleeping after a fantastic Sunday lunch, but as a Nigerian wife, she made the moi-moi. The following day, I told my mum in a nice way that my wife doesn’t like cooking on Sundays, and told her why. My mum understood, as she was a career woman as well. Two weeks later we had a similar issue. Stew abruptly finished Saturday night, and I made stew for the family on Sunday morning. I won’t say this has anything to do with feminism, but I understand that my wife cooking on a Sunday makes her unhappy and tired during the week. So I step in if there is a need to cook large scale on a Sunday. By the way, I make some family dinner during the week, before it seems like I am doing her a favour by cooking on Sundays. Another point: my wife is a better driver (I actually hate driving) than I am. To make matters worse, I can barely drive at night, so she drives whenever we go out at night.

I think guys who fight feminism don’t fully understand what it means and how they are currently disadvantaged. Like I said earlier, feminism is about seeking a fairer world by naming the problem of gender disparity to opportunities in life. The earlier we close the gap, the better for both sexes, as we will live happier and fuller lives.

I would marry my wife all over again if I could. Fortunately, it’s the only thing I know. I don’t understand the other world.