Nelson, Thelma and Tuoyo give Us Inside Gist on #Bet9jaBBN "After The House" 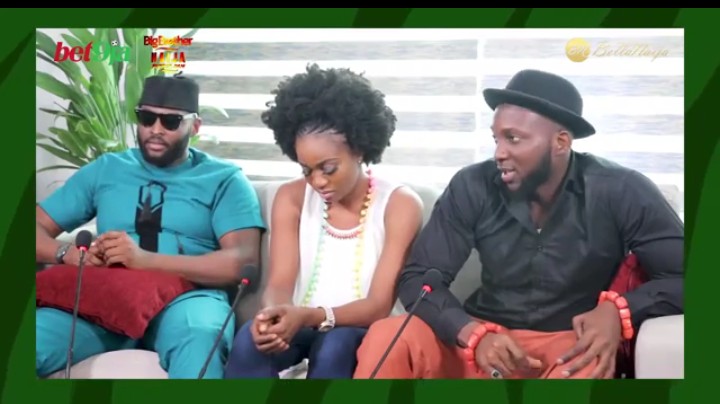 Big Brother Naija 2019 housemates Nelson, Thelma and Tuoyo are the latest guests in the third episode of Bet9jaBBN x BellaNaija “After The House” hosted by the show’s 2018 finalist, Tobi Bakre.

When asked about their BBN experience during their stay in the house, Tuoyo says he enjoyed the morning workout sessions, the tasks, and ofcourse, the Saturday parties with “Lamborghini Mercy” and he would love to experience it all again.

Nelson says that he and Esther are cool and maintains that his relationship with her was never a strategy.

In response to Tobi’s question about his relationship with Diane, he says that she gave him the same amount of emotion she gave Tuoyo and Sir Dee and he never really knew who she liked.

Tuoyo agreed with him, mentioning that she gave everyone the same energy and also that he once admitted to Nelson that he liked Diane and he was aware that Nelson liked her too.

Nelson responded that he was taking his time with  starting a relationship in the house and that he respected women.

Tobi asked Thelma about her friendship with Diane and Mercy, and she said was never interested in being close with anybody in the beginning but Mercy wanted to be close to her because they are from the same state. She said Diane was already getting friendly with Mercy so she always found herself in the same space with them even when she tried hard to distance herself from them. She says that Jeff started to call them “Powerpuff girls”.

Tuoyo, in response to Tobi’s question about the worst thing he had heard about himself since leaving the house, says he heard that he was boring and didn’t talk much in his first week in the house. He says Saturday night was a time for him to express himself and felt like it would have been more fun if the housemates were more willing to dance.

Answering the same question, Thelma says that she heard she’s troublesome, rude and she nags.

Tobi then asked about their opinions on the different relationships in the house. After a few moments of trying to evade the question, the host prompted Tuoyo to talk about his opinion of Gedoni and Khafi‘s relationship. Tuoyo shared that he felt that Khafi liked Gedoni more than he liked her. He also endorsed Ike and Mercy’s relationship and felt they had the best kind of relationship in the house.

Speaking on Ike and Mercy‘s relationship, Thelma says the fact that Ike stole coins and entrusted them to Mercy wins her approval.

The ex-housemates then shared their future plans. Thelma said she wants to do comedy, acting, dancing and everything. Tuoyo shared that he will continue with his fitness and that he wants to go into entertainment, acting and would like try therapy running.

Nelson shared that he would hit the gym and he’s representing Nigeria in November at the Mr Universe pageant. He also says that he would polish up his fine art, work with some brands and kick off his massage therapy.

We wish them luck!

Here are 5 Love Lessons for Couples, according to Jay Shetty | WATCH