Check out These Biggie's Epic Freeze Moments from #BBNaija Day 73

How can you develop relationships within your team while having fun at it? Let team Legends show you.

According to Khafi, Tacha, Frodd, and Omashola, nothing beats some quality time with your team members, even with half of the team Evicted.

When you’re hanging with your best friend, you’re guaranteed to get into a lengthy gist that covers a surplus of juicy topics. But the things best friends talk about in the afternoon, are quite different from the things they might talk about, say at midnight. Here’s what these four got up to in the early hours of the morning.

What began as a conversation about Khafi and Gedoni’s relationship in the Pepper Dem House, ended up as a tease. First, Frodd made fun of her as he reminded her of the time she did nothing but spend time in bed with Gedoni.

While doing so, he did not fail to mention the fact that Gedoni initially took interest in Mercy, because of her attractive body features. Then Tacha went on to tease her further on how smitten she was when the Khadoni ship was just getting started.

“You’re a tireless romantic,” Khafi said to Frodd as they continued their bonding session. As the trio reminisced about what went down in their first week as Biggie’s guests, Khafi, Tacha, and Frodd delved into Frodd and Esther’s relationship.

When asked about the first time couples started forming in the Pepper Dem House, Frodd said his friendship with Esther is one that he’ll forever be grateful. He claimed Esther was the only Housemate that saw him through thick and thin in the game. “Destiny is key,” he added while trying to explain to his teammates that his relationship with Esther in the House was destined to be, regardless of their ups and downs. “Na we quarrel pass, na we make up pass,” he further said. 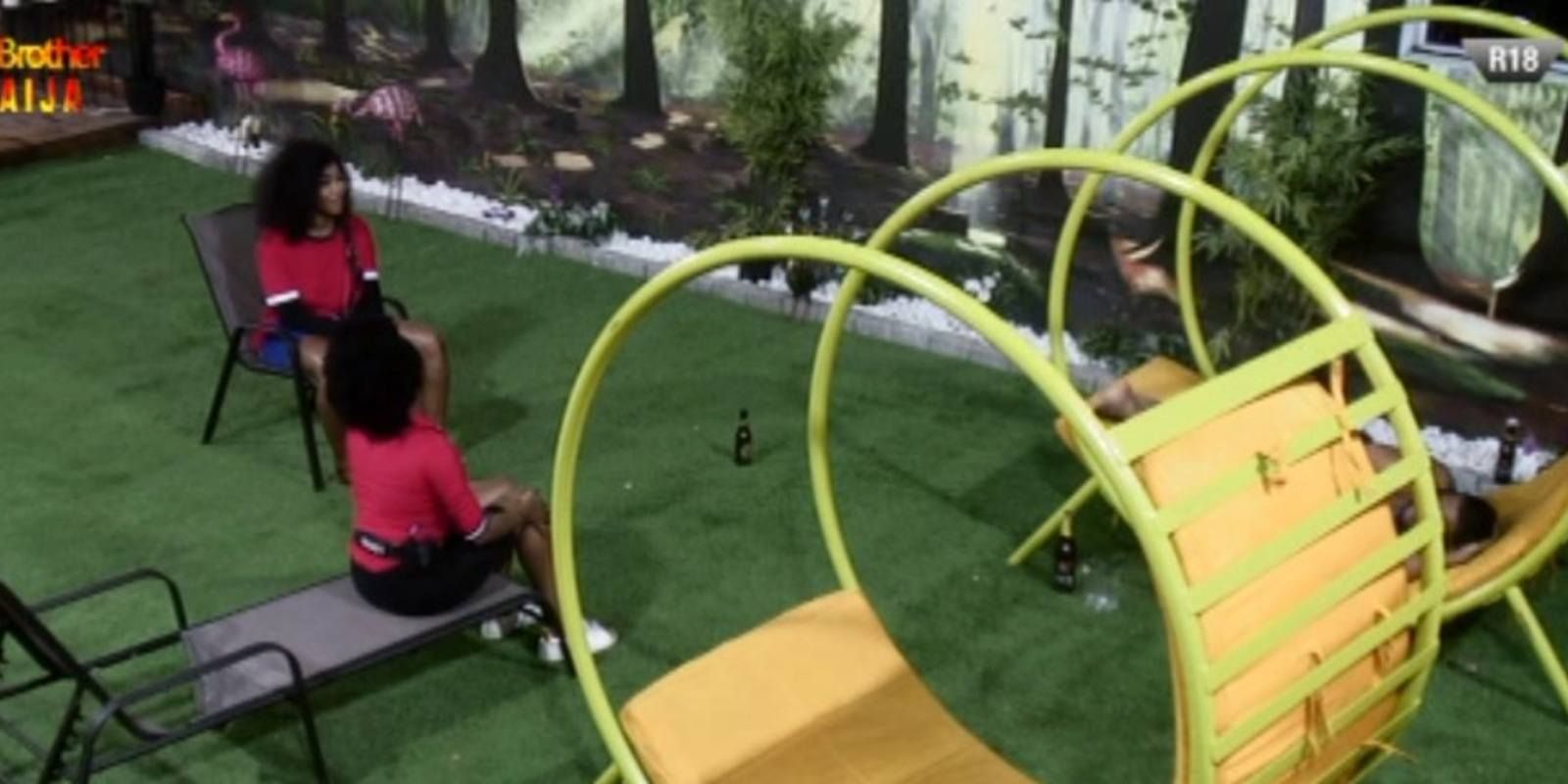 Frodd: Na we quarrel pass, na we make up pass

Coming Out Of The Friendzone

How possible is it to come out of a friendzone?

Tacha asked the above question and we couldn’t help but wonder if the question was directed at Frodd. Just before we could answer that question, she asked again, “Do you think this was the case between you and Esther?”

Without wasting much time on the question thrown at him, Frodd answered, “No o, it was just God”.

As if triggered by his response, Omashola countered Frodd’s statement by breaking down the happenings in Frodd and Esther’s relationship. According to Omashola, Esther liked Nelson but following Nelson’s Eviction and Frodd being crowned Head of House in that same week, Esther started gravitating towards Frodd. He further added that the turning point in their relationship was when Venita came into the House and developed a situationship with Frodd, which prompted Esther to “try to get her man back”. 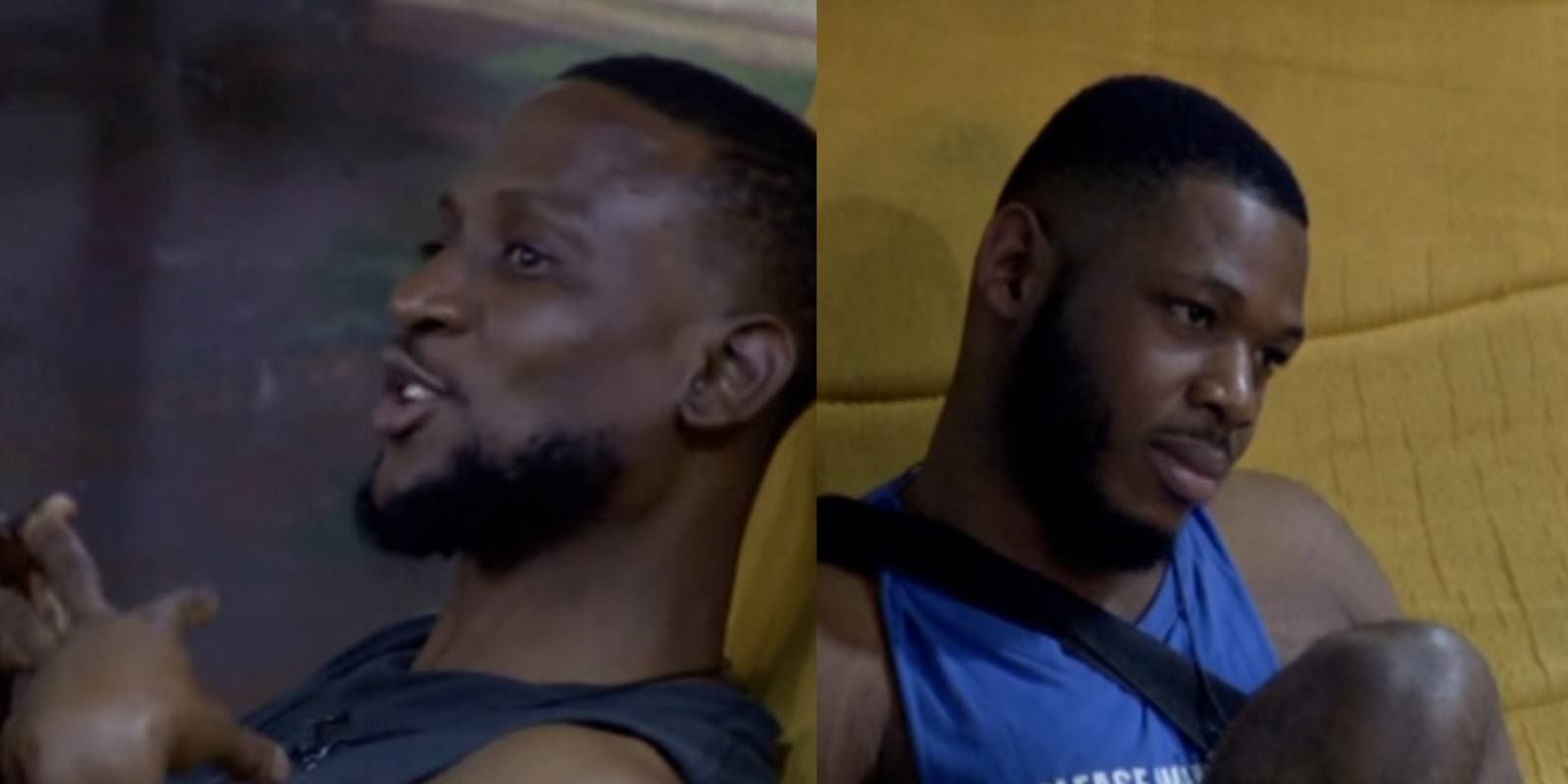 It’s not like he doesn’t know the truth , but hearing it is more painful #BBNaija pic.twitter.com/OldFwlrJXF

Omashola and his wisdom of Solomon! My God! ???? The analysis of Frodd and Esther too accurate! #BBNaija pic.twitter.com/uwm9vkoBXb

Could this be true? Doesn’t it really matter since he still got his girl though? *wink*

Sitting, standing, crouching or lying, the Pepper Dem Gang have been found in different positions during a freeze moment and some were quite hilarious.

Housemates freeze! This order from Big Brother is one that is sure to bring out some heartfelt laughter from anybody that sees them in their positions. We take a look at the Pepper Dem Gang’s epic freeze modes and trust us, you will enjoy every bit of this journey.

You see your favourite celebrity and all you want to do is hug and ‘famz’ them but guess what? Bros Biggie has activated freeze mode. How painful! This was the situation with the Pepper Dem Housemates when Jidenna paid the House a visit. Gosh, you could see the Housemates struggling with Big Brother’s instruction. What kind of Pepper was this? From Cindy’s one million eye blinks to Ike clearly moving his head, it was a trying moment for them all. Here’s what Sherry and Sleek Jane thought.

I swear I for hug jidenna and collect 2 strike. If Iperish I perish #BBNaija pic.twitter.com/9swMjg71zI

No waaayyyy I won’t see jidenna and freeze……biggie just disqualify me please ??????????? #BBNaija

Let’s move away from Jidenna’s visit. What about the time OPPO’s mascot Ollie came into the House and the Housemates were in the ‘be like that’ position? Not only was Ollie giving the Housemates hot dance moves, but the way it was executing the moves made it funny. Mike, however, got a tickle from Ollie and freeze or not, the man had to laugh.

This oppo mascot is super cute. I for unfreeze to give am hug. #BBNaija

Imagine holding a spoonful of a delicious meal and halfway to your mouth, the pause button is pressed. Well, that was what happened to Omashola.

What about when Tacha was crouching during a freeze Task. Baby girl didn’t want to hear stories about her back giving out so she quickly sat her butt on the floor. A classic case of prevention is better than cure.

Did you guys catch that time when one of Biggie’s ninjas made away with Ike’s shades in a freeze mode? Ike, being the gangsta that he was, had a little struggle with the ninja which we found funny but he composed himself when he remembered that there were still in freeze mode.

Low key, Biggie is the ultimate cruise king when it comes to freezing. It doesn’t matter if the Housemates were in the middle of a Task if Big Brother wants a freeze, then freeze it is. Recall when Biggie froze and unfroze the Pepper Dem Gang back to back? The Housemates could not take it fam, once they heard Biggie’s voice, they chose a comfortable position, irrespective of what Biggie wanted to say. Do you blame them?

Biggie: this is big brother…. HMs FREEZE!
Mercy runs to a chair to sit
Diane falls to the ground to lie down….
Me:????? #BBNaija @BBNaija pic.twitter.com/Zkca5vTp5p

Freeze moments in the House are always fun, but one thing remains a mystery, those Housemates dropping albums in the restrooms, do they freeze too? We look to Kayode for answers ?.

A Game of Revelation

It was a fun moment in the Pepper Dem House as the Housemates entertained themselves with a game of reality.

Trust the Pepper Dem Gang to never dull themselves. They cheered themselves up in the Bedroom. The result was an unexpected series of revelations that blew our mind completely. If you think we are joking, check them out yourself.

Shortly before the Game of reality began, Diane came forward to invite the Housemates to a bikini Party after the Arena Games on Thursday. Hmmm, guys, get ready for a showdown from the Pepper Dem ladies. Save the date. 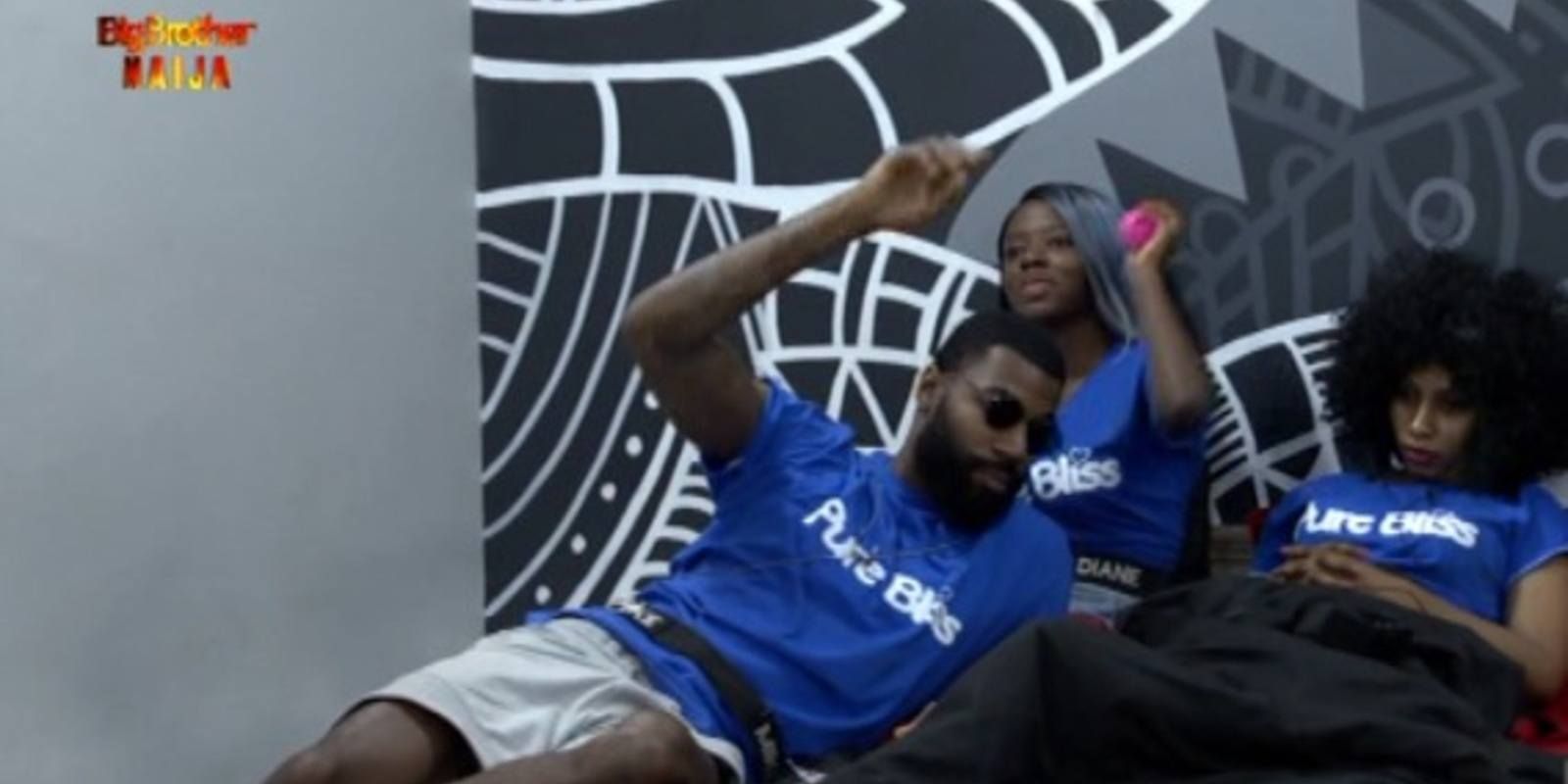 The Game of Reality

When the game started, we were expecting it to be like one of the truth and dare moments Diane coordinated. But nope, this was hot, we were soon transported into a world of the Housemates we didn’t know earlier. Now, let’s dive in.

The question was a simple one: who will you kiss, kill or marry? While some of them picked expected Housemates, others surprised us with their choice. We know Seyi and Tacha are not on good terms but it was a surprise when he picked her for the kiss. Elozonam who told Ebuka during the Live Show he would like to see Tacha also surprised us when he chose her. In the end, Diane the most kiss while Ike got the most kill. If it were true, it means Diane’s lips would swell up out of excessive kissing! Lol. And Ike, perhaps his competitiveness in the House earned him the kill.

This Game saw the Housemates say about themselves what they felt none of them knew. Some talked about their names, others talked about the nasty things they did on their birthday. Elozonam said he sucked his thumb till he was eight years old. Ike hasn’t seen his family for over a year. Khafi hasn’t seen her dad in seventeen years. When they later switched to the daring one. Tacha said, “the first time I had sex, it was boring as f*ck and it was less than 30 minutes.” 30 whole minutes! Guys, can you believe that! 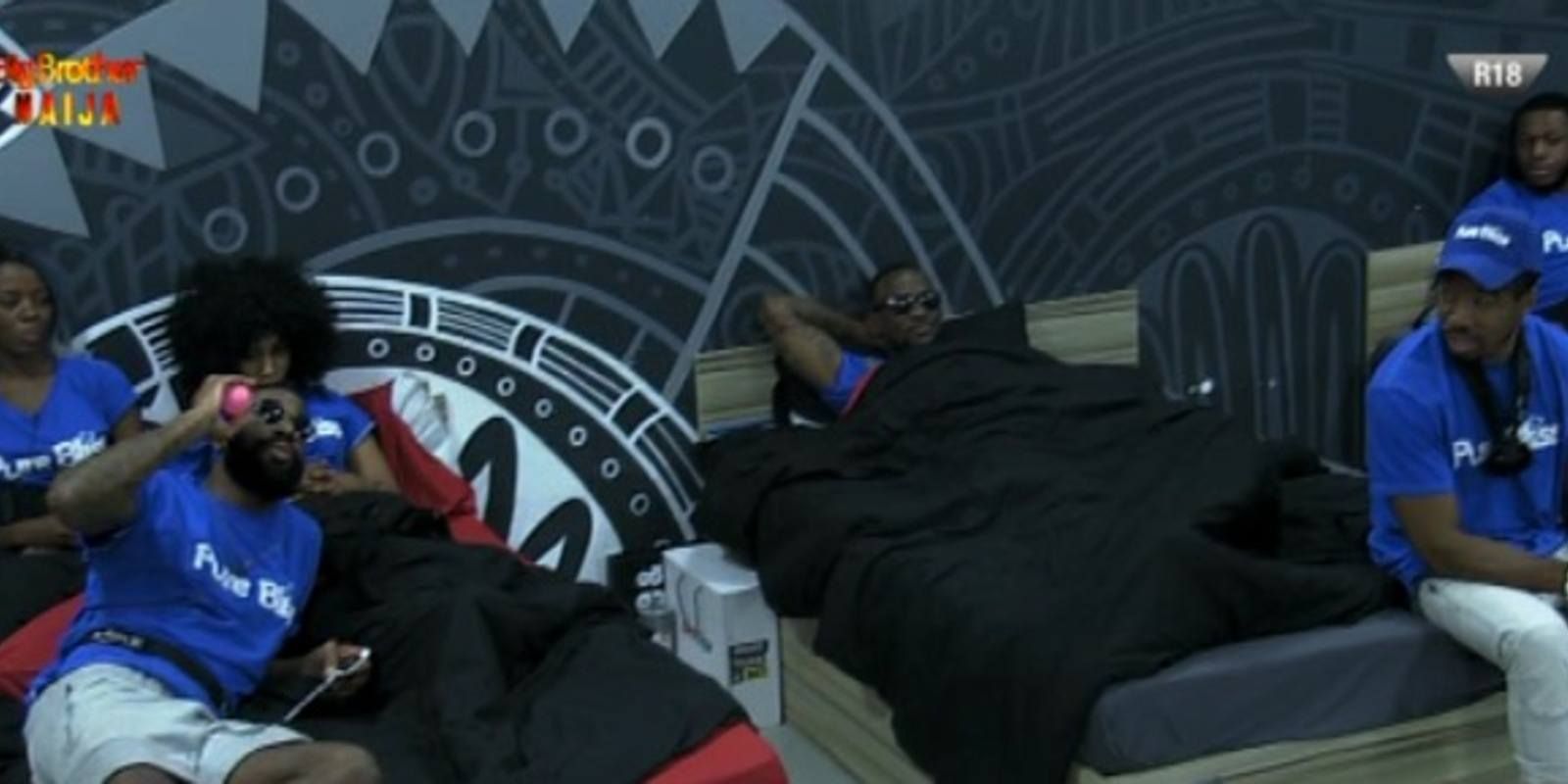 It was indeed an interesting session for the Pepper Dem Gang. If care is not taken, we might see them doing it over again especially during their siesta because they clearly had a lot of fun. Are you ready for more?

Nothing the Pepper Dem Gang enjoy more than winning and today, they celebrate another win courtesy Pure Bliss.

In an interesting and engaging Challenge, the Pepper Dem Gang won themselves a 5 star (all you can eat) meal in a buffet style with Nigerian and foreign delicacies. The Challenge which was divided into two rounds saw Omashola winning the first round. 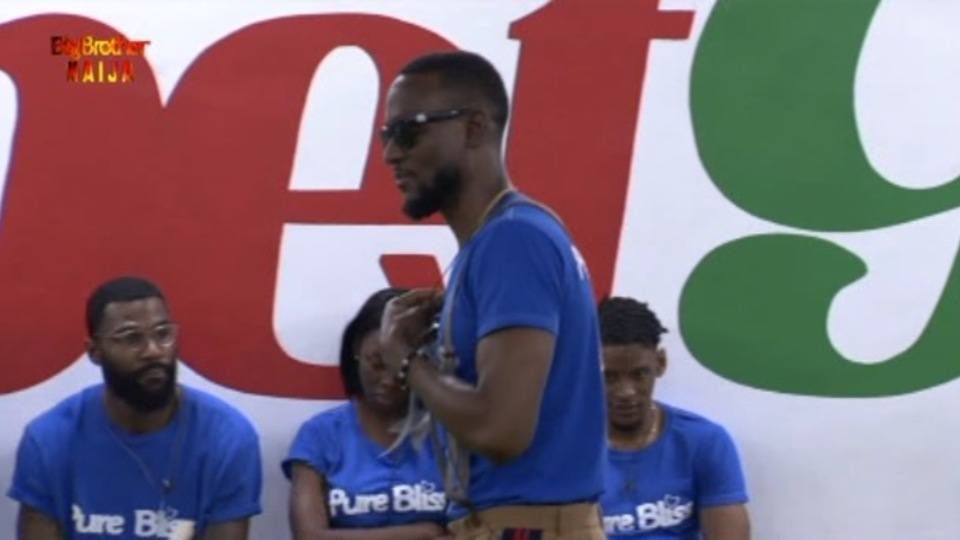 The Pure Bliss Biscuit Race
It’s always fun taking on challenges, and this challenge sure had every element of fun including the delicious tasting Pure Bliss Biscuit. Each Housemate had to pour biscuits into their bowls then move the biscuits to another empty bowl across the Arena. Easy right? So they thought initially till they found out they had to pick the biscuits with wooden spoons and transport to the other bowl. That wasn’t just all. It got harder. They had to use their mouth and teeth to handle the wooden spoon and transport the biscuits. It was quite a sight watching them transport the biscuits. They hurried across the Arena carefully trying to make sure none of their biscuits dropped on the way, but a few still dropped. In the end, Omashola won with the most number of Pure Bliss biscuits transported. 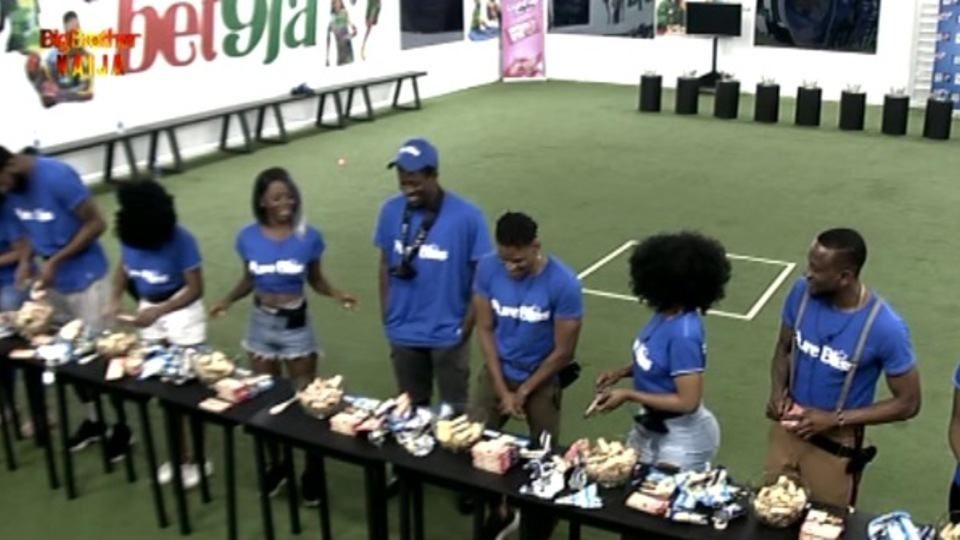 Do As You Read
After that was done, they proceeded to the next game. Here they all had to pick a card and follow the instructions on the card. From dancing to singing, rapping, telling jokes and saying something nice about someone special, the Pepper Dem Gang obeyed each instruction and it was a delight to watch. 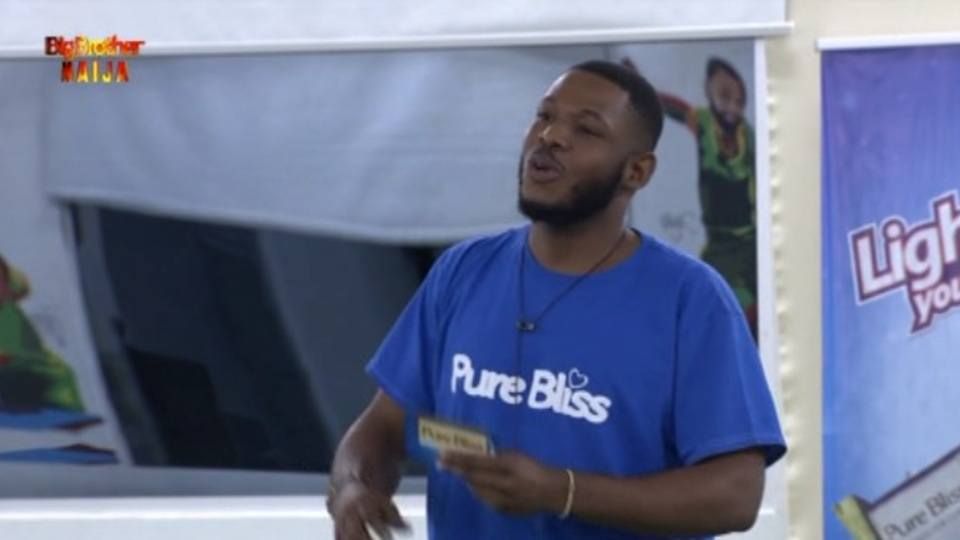 A Gang That Plays Together Wins Together
This was the case as the buzzer went off finally and instead of just one Housemate winning, every single member of the Pepper Dem Gang won. This win had them erupting in joy especially when they heard what they had won – a full course meal. If you know the Pepper Dem Gang well, then you’d know right after winning, eating was their next favourite hobby. 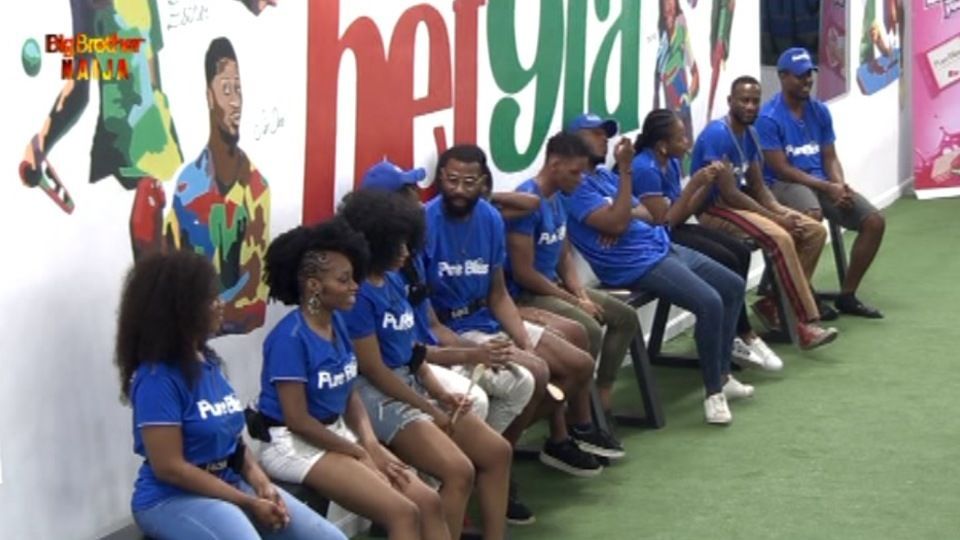 Journalist Joey Akan narrates how he was “kidnapped by SARS”