Chineze Aina: How to Be a Successful Woman in the Office... Without Hurting Anyone's Feelings 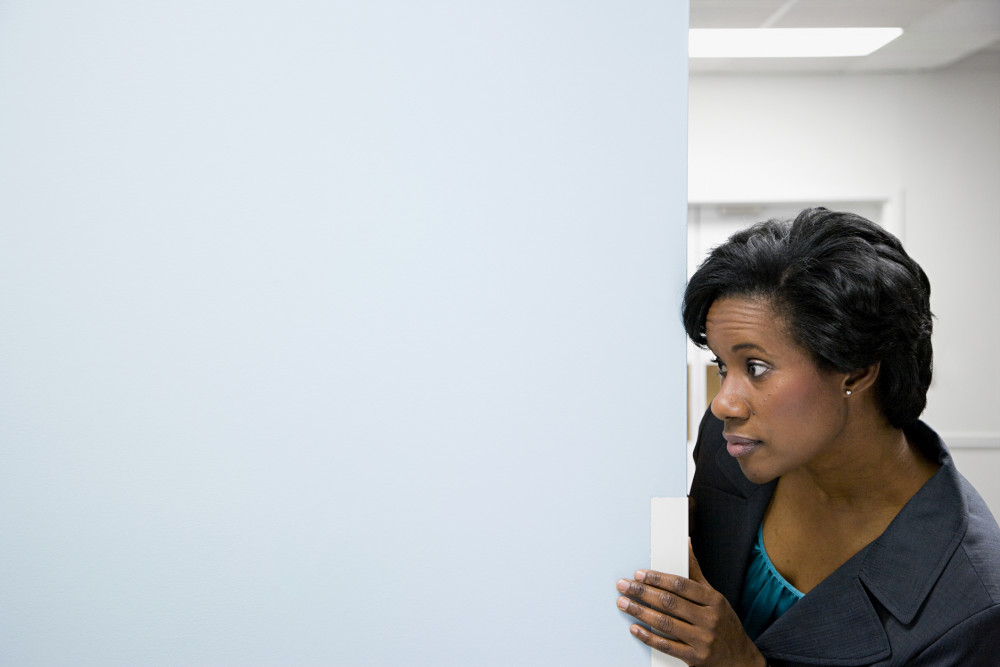 Editor’s note: We know ordinarily we shouldn’t have to say this, but after much deliberation we decided it’s best to put it out there – front and center. We don’t want people getting annoyed needlessly.

This is a tongue-in-piece cheek… or is it tongue-in-cheek piece?

We hope you enjoy this as much as we did. We believe there are notable take away points therein.

Ambitious women are terrifying… especially to men who do not like women that stand up for themselves. To survive, women have had to find non-threatening workplace coping mechanisms that may not guarantee them career longevity and confidence but helps as they navigate the murky waters of workplace politics.

While we all know that not every workplace is toxic, opaque or political, many women admit to feeling unappreciated and otherness at work because of their gender.

Lois P. Frankel, in her book ‘Nice Girls  Still Don’t Get the Corner Office’, explains that if you work nonstop without a break, worry about offending others and back down too easily, explain too much when asked for information or “poll” your friends and colleagues before making a decision, chances are that you’ve been bypassed for promotions and ignored when you expressed your ideas. Women have now learned to communicate differently to attain inclusion. Temi, Supply Chain Manager with a pharmaceutical company, tells me: “last week, I came out of a meeting feeling over-competent and like I offended people”.

I have put together a survival guide that women can use to accomplish their goals, succeed in their careers and become leaders, without wounding the smashable male ego.

Many women imagine their male colleagues see them as equal, but over the years, we have come to realize that deference is what most men want. Many cannot separate a female colleague from a subservient wife. Both, to them, are the same. Some years ago, I was told to resume at a location that will more than double my travel time daily. I was pregnant and I felt it was ludicrous, but I opted not to call the ‘boss’ or discuss it with his many loyalists. This didn’t help as the right thing to have done was to have started making calls and apologizing for real and imagined wrongs. He invited me for a meeting and told me there was an ego attached to his office and my silence was disrespectful.

An apology is a proven tactic for softening hard stances. Apologize before discussing an idea, requesting feedback or expressing a contrary opinion. Start with something like this ‘I know this sounds foolish, but I have an idea…’ Also, reticence is key when addressing sensitive topics. Another instance is, instead of saying ‘these numbers are wrong’ say ‘I am sorry, are these numbers right? I am not a numbers person’, then follow it with a self-deprecating laugh. Even when you know the numbers are clearly wrong, you will get the man to look at the numbers again without calling out his mistake and again, dearest ego will not be bruised. You can even take the fall for his mistake.

Do not be too assertive

There was this time a friend raised an issue at a town hall meeting at her workplace. She spoke up because she assumed that was the platform to talk. This point she mentioned got the CEOs attention and the director involved was asked to explain publicly. When she finished talking, everyone in the room was looking at her like she developed a third eye. Minutes before, a male colleague had spoken and his protestations were greeted with a round of applause, people nodding and whispering about his no-nonsense attitude. Gingered, she had stood up too. Well, let us just say she didn’t receive the support she imagined; her speech was greeted with a mixture of pity from her friends and disgust from does who did not know her. Though the incident sparked conversations and influenced how her organization executed projects from then on, it didn’t bring her much peace.

Many times, in a bid to be seen as a serious woman, you will have to do your best to prove that you are one of the guys. Distance yourself from women, especially the not-too-popular women, the ones who get pregnant three times in two years and always have excuses to care for the family. If this involves disparaging other women and being totally inhumane, then do it.

Hesitance and a lack of confidence wins

Adopt wishy-washy language that makes you appear hesitant and unsure on purpose. Words like, ‘could’, ‘maybe’, ‘I don’t know’, ‘permit me to check with my boss’ and other phrases that demonstrate that you don’t want to take a stand is a winner any day. Instead of saying “I have an idea”, say “I am just thinking out loud here”. Being confident could see you being termed as a ball breaker. Many like it when you act a little like you could drown in a 2-feet pool without them and have fewer opinions.

Sleep with one or two bosses

This is extreme and a form of self-flagellation, but it helps to make you appear not so bright after all. We all know how much people look for ways to take the shine off a woman’s achievement by mentioning a scandalous affair or an influential lover. I remember admiring a woman during my internship days at one of the banks. She was clearly shrewd and attractive. One day, I mentioned to one of my male colleagues how I loved her self-confidence. He snickered as he told me her confidence came from sleeping with the boys who wear the ‘pants’ in this organization’ and he was excited to tell me more. Telling me she achieved so much, not just because she had big brains, gave him a certain satisfaction. Even when I mentioned her initiatives and achievement, he brushed them off, adding that she wasn’t better than anyone else.

Use lots of emoji and exclamation marks

Women, including myself, always feel the need to be charming and nice when sending emails, talking to male colleagues or requesting for updates. The high unemployment rate has forced men to respect the office, not necessarily the woman. However, your entry barrier to the ‘favourite club is sweetness and coyness to all men. It is very important for women to work hard but not come across as abrasive in their interactions with men. This is especially important relating to men who used to be your peers and now your subordinate. Even if your need for approval ends up hurting your leadership, it’s a small price to pay.

Collaborate more with men
Do you need something done? Ask a capable male colleague to help get it done. Make sure you emphasize the fact that you want a man to do it because they can be trusted with speed and combativeness.

You need a promotion or are interested in a project? Ask a male superior or peer to ask on your behalf. You have to show that you are not too ambitious at all times and you like men.

Never call out a man

Stella’s boss was doing his best to get into her pants and deliberately under-appreciating her efforts when it became obvious she was never going to let him. He’ll nitpick on her work, spell out every error and when she got something right he would pretend not to notice. After he tried to rape her and she managed to escape, she knew she had to report him to HR. Stella is not the only one he has been harassing in the department and she banked on the other ladies coming forward so she sent an email to human resources detailing her experience with him. Nothing came out of it because their HR was already compromised. The other women refused to come forward as well.  In the end, he got a slap in the wrist for being mildly inappropriate towards her. Calling out his behaviour did not do much to endear her to the team.

Pretend to be not too smart

When a male colleague is telling you something you already know, pretend you do not know it. An example is:

“Chichi do you know how to use excel for data analytics?”

“No, I don’t. Please will you teach me, I have so much to learn from you’. She replied.

Chichi runs an online training school on weekends teaching people data analytics. But you see, Chichi doesn’t want Mr. Oga to think she knows too much, so she plays dumb.

In her book How to Succeed Without Hurting men’s Feelings, Sarah Cooper summarised:  ‘The unspoken rules of how women should behave in the office are as numerous as they are confusing. Ask for a pay rise? Pushy. Take credit for an idea? Arrogant. Admit a mistake? Weak. Successfully juggle work and family? Unpromotable.’

You choose: succeed with a few enemies along the way or spend so much time trying to be liked by everyone? What are your thoughts?

Farida Yahya: Is Work Life Balance A Myth? Here’s What I Think

Chineze lives in Lagos with her husband and their 3 young children. She loves good food and good people. You can follow her on twitter @ChinezeAnuli and Instagram @chinezeaina