In total, Nigeria has now recorded 9855 cases of COVID-19 with 273 deaths, while 2856 patients have been discharged from various isolation centres across the country.

A breakdown of cases by state can be found via https://t.co/zQrpNeOfet#TakeResponsibility pic.twitter.com/5TwNyauX3o

268 stranded Nigerians in China safely arrived at the Nnamdi Azikiwe International Airport, Abuja, on Saturday, May 30, 2020. According to the Minister of Foreign Affairs, Geoffrey Onyeama, the evacuees will be going into the mandatory 14 days quarantine as stipulated by the Federal government.

Kogi State is responding to the Nigeria Centre of Disease Control’s reporting of COVID-19 within the state, Channels News reports.

In a statement released by the state’s Commissioner for Health, Saka Audu, on Saturday, the state rejected NCDC’s reporting while describing it as “fictitious”.

THE PURPORTED COVID-19 CASES REPORTED FOR KOGI STATE:
THE TRUTH AS WE KNOW IT.

● Nigerians are in the know of the stand off between Kogi State and NCDC that has been on for a while now, which is not unconnected to our stance to resist the ascription of fictitious confirmed cases of Covid-19 to our Dear State to suit a preformed narrative we believe is the agenda of NCDC, which is to claim every State in Nigeria has Covid-19.

● In the heat of this stand off, we woke up one morning to hear that NCDC has recorded two cases of Covid-19 for Kogi State. Your suspicion will be as good as ours hence we set out to investigate the claim and here are our findings.

1. That NCDC claims a 62 year old man and his son from Kabba LGA of Kogi State tested positive to Covid-19. According to the son, his father, who is a Hypertensive/Diabetic had attended a burial ceremony where he was stung by bees. He then developed facial problems from the sting and was taken to the Hospital. The facial swellings subsided but the body weakness persisted where eventually the managing Doctor discovered he had High Blood Sugar, which the Doctor continued to manage.

2. The Doctor confirmed that there was no time the patient presented with fever, cough or difficulty in breathing. The only complaint was that of general body weakness.

3. The Doctor had no reason to refer the patient to FMC Lokoja except on the insistence of the patient because they felt he was not getting better.

4. On reaching FMC on the 24th of May 2020, FMC claimed the patient was referred to them on account of 1week history of fever, cough and difficulty in breathing with high suspicion of Covid-19, a claim the referring Doctor has vehemently refuted.

5. The ideal thing to do, if there are no hidden agenda, is for the State’s Covid-19 management
team to be invited to pick up the patient to the the State’s holding area for testing and onward management.

6. According to Management of FMC Lokoja, the patient declined the intervention of the state case management team and was said to have left for Abuja for further treatment by 6am the following morning. However the letter the Kogi State Epidemiologist eventually received from NCDC informing the State of the fictitious claim showed that the patient was referred to Abuja from FMC using FMC’s ambulance.

7. On reaching Abuja, a Covid-19 test was hurriedly conducted and returned positive within 3hours! Ridiculous right?

● One needs not dig deeper to see the handwritting clearly written on the wall at how desperate NCDC is to nail Kogi State with a Covid-19 case and there is no telling how low they are willing to stoop to do so.

● The patient they claimed to be positive for SARS-COV2 (on the 25/05/2020) wasn’t taken to an Isolation centre untill yesterday 29/05/2020 after they suddenly discovered they needed to cover up their many lies.

● His son who was also purported to be positive was asked to go home! He remained with his father in the Hospital running errands going even as far as Suleja, in Niger State. Who are we fooling?

● It should be mentioned also that the patient’s relation initially cried out to us to help evacuate them from the National Hospital but on ariving there to evacuate them, and conduct a confirmatory test using a private molecular laboratory as well as Kogi State Rapid test kits, the patient eventually denied us the opportunity to get it done, siting fear of receiving punishment from the Federal Government (NCDC). Being able to carry out this independent verification will have put to rest this matter once and for all.

● We also wish to categorically state that though NCDC has consistently refused to support Kogi State in her fight against Covid-19, WHO had been part of our team till date. Though NCDC refused to follow their own protocols on visiting the State, WHO staff who travelled out of our State and returned have always obeyed the rule of self isolation for 14 days.

● Despite the fact that we do not accept the fictitious cases, we have gone ahead to do contact tracing to identify all those who came in contact with them, tested them and they all came back negative. They will be retested in the next 14 days post first contact.

● The normal NCDC protocol is to collect samples through the State Ministries of Health where an Epid. form (Epidemiological form) will be filled by the State epidemiologist and a sample number called an epid number attached to accompany the sample to the laboratory for onward testing. In this case, who filled the form? Where is the sample’s Epid. no.? Is it the FCT state epidemologist that filled the form and took samples at the same time? If that is the case then they should have recorded the cases for FCT and not bother us with their ruse.

● Nigerians need to start asking NCDC what they stand to gain by manufacturing fictitious claims and attaching them to States and how eager they are to announce confirmed cases, a situation that has had them coming out to apologise publicly.

● We will let the public be the Judge having laid down all these facts. We as a State have nothing to hide, but we continue to insist that we will not be a part of any fictitious scheme by a Federal body upon whom Nigerians put so much trust.
This will also serve as our clarification for those who have been asking.

●We have both video and audio evidences for all claims mentioned here, however for good reasons we are holding on to them till it becomes a necessity to share them to the public.

21 patients (6 females & 15 males) including a foreign national have been discharged from isolation centres in Lagos State. This brings the total number of discharged patients to 875.

The ministry for health made this know via its Twitter handle on Saturday evening.

*️⃣This brings to 875, the number of #COVID19 discharged cases in Lagos now

The National Association of Resident Doctors on Saturday issued a 14-day ultimatum to the government to address some of their pending demands, including the non-payment of COVID-19 inducement allowances.

The doctors issued the warning at a press briefing in Bauchi.

They are demanding the:

According to the statement issued, if the demands are not met by the end of the ultimatum, the doctor’s union will embark on an industrial strike. 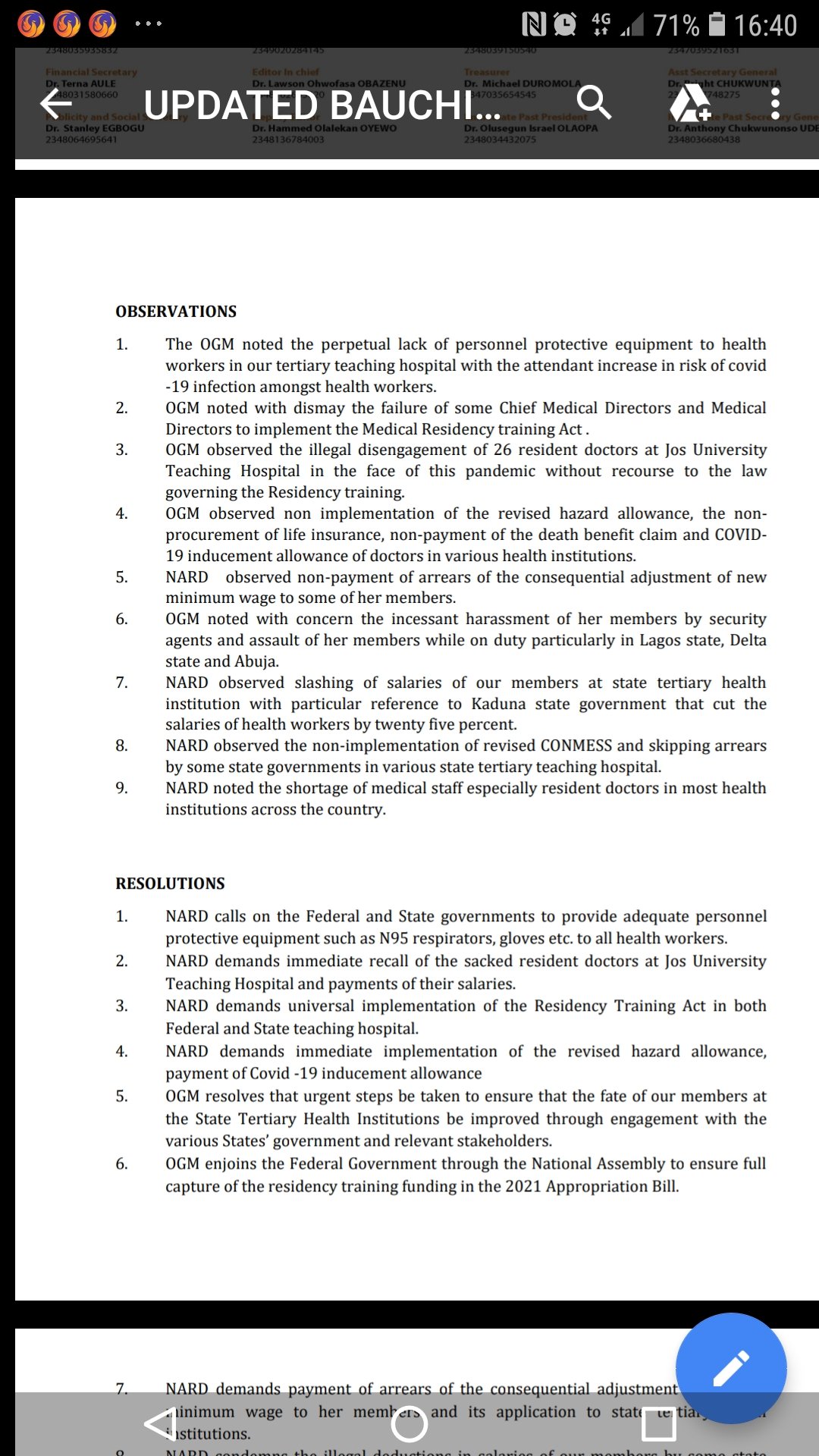 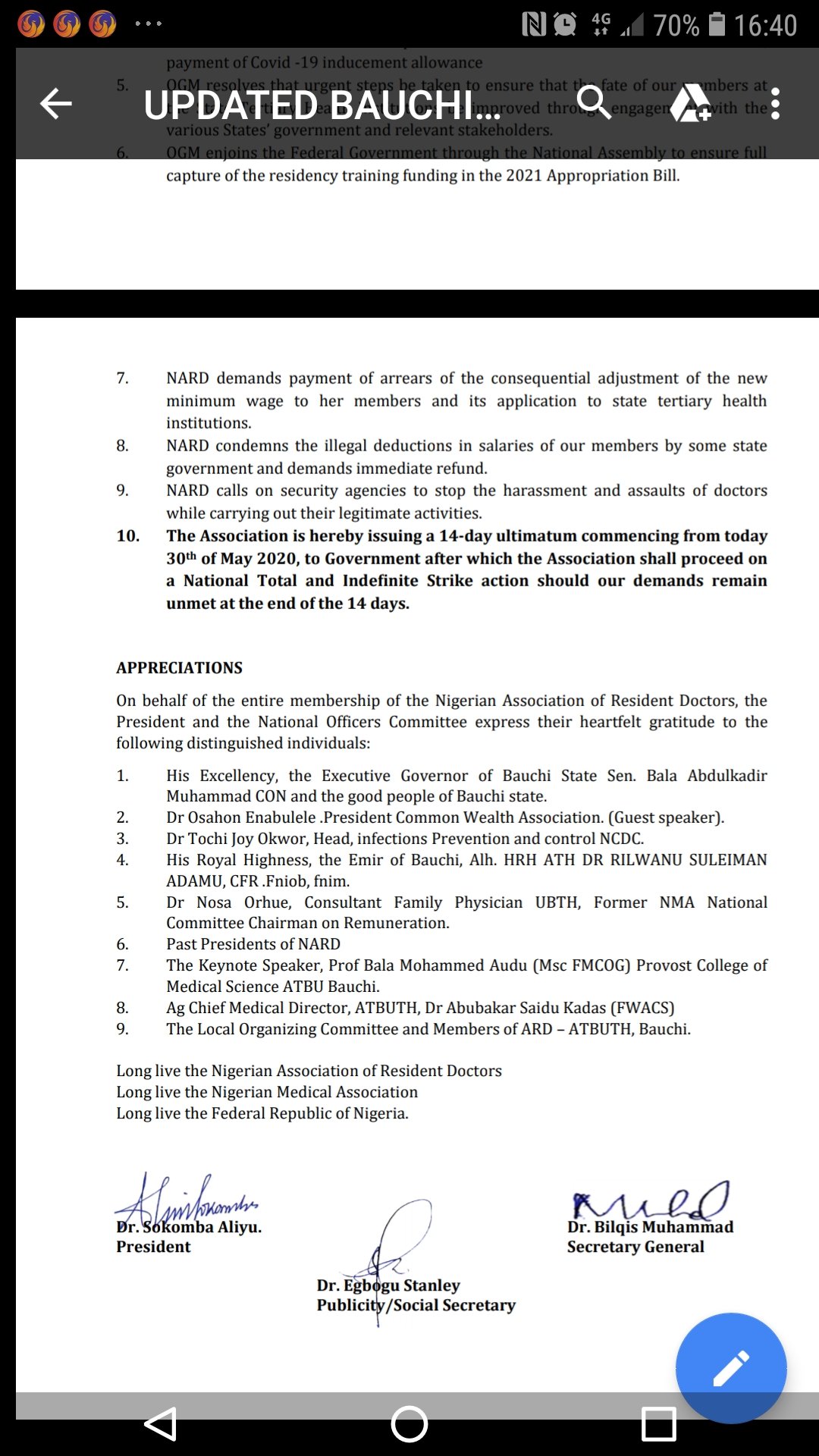 Prince Joachim, a Belgian prince has contracted coronavirus after attending a party during the lockdown in Spain, the country’s royal palace says.

Days later, the 28-year-old royal tested positive for COVID-19, after attending a party in the southern city of Cordoba on May 26, a spokesperson for the Belgian Royal Palace said on Saturday.

He is a nephew of King Philippe.

According to the Royal Palace, until the private party in Córdoba last Tuesday, Prince Joachim strictly adhered to the rules on confinement in the fight against the coronavirus. He lived in self-isolation in the parental home (in Laeken, Brussels, with mom Astrid and dad Lorenz).

How Belgian Prince Joachim was able to fly from Brussels to Madrid (only essential travel is allowed)? The Royal Palace couldn't explain. According other sources, he told the police he is doing an internship in Córdoba. Don't forget: his partner Victoria comes from this place.

According to Johns Hopkins University, more than 6 million cases of COVID-19 have been reported worldwide, including at least 368,711 deaths. 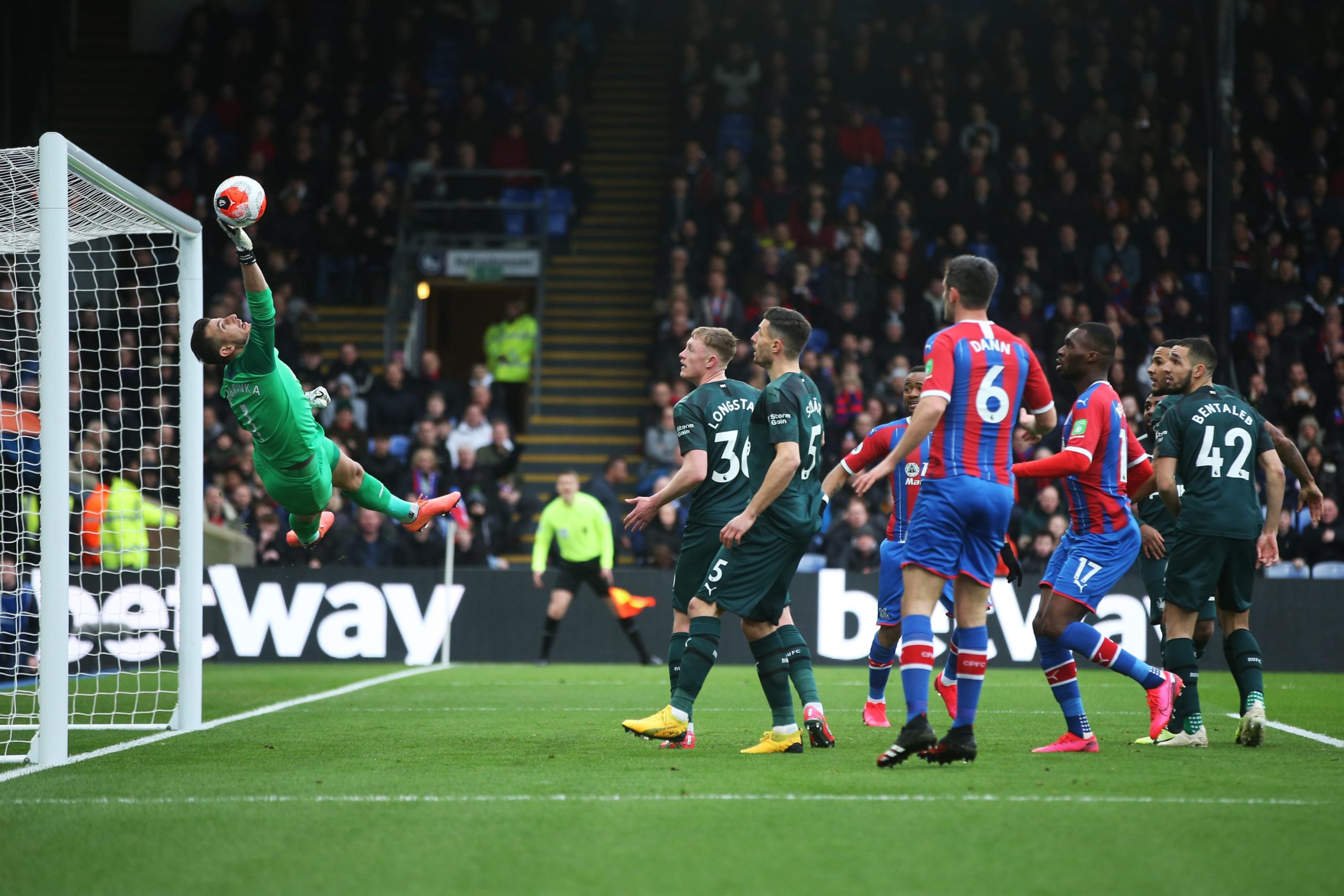 There have been no positive tests for coronavirus from the latest round of coronavirus testing carried out in the Premier League, the English top-flight announced on Saturday.

The Premier League announced that 1130 players and club staff were tested for COVID-19 on Thursday 28 May and Friday 29 May, and of these, zero have tested positive.

A Premier League statement as seen on Sky Sports reads:

The Premier League can today confirm that on Thursday 28 May and Friday 29 May 1130 players and club staff were tested for COVID-19. Of these, zero have tested positive.

India announced plans to further ease its national lockdown even as the country reported a record daily rise in new coronavirus cases. From 8 June, restaurants, hotels, shopping malls & places of worship will be allowed to re-open in many areas in the first stage of a 3 phase plan.

According to India’s Ministry of Homes Affairs, a phased re-opening of public spaces in some areas and a shortening of the night-time curfew will be introduced.

Starting June 1, restrictions on the inter-state and intra-state movement of persons and goods will be lifted, unless the state or union territory decides otherwise. The curfew prohibiting the movement of individuals between 7 p.m. and 7 a.m. will be shortened to 9 p.m. to 5 a.m. nationwide.

Educational, training and coaching institutions including schools and colleges will be opened after consultations with states and union territories under phase two.

No exact dates were provided for the start of phases two and three.