For Girls & Women in Nigeria, Sexual Assault & Rape is the Reality of their Daily Lives & It Needs to End!

Very recently, a Twitter user, Efik Ibi, shared her experience of how she was sexually harassed while she was with her 9-year-old cousin, as they stood by the road waiting for their ride. 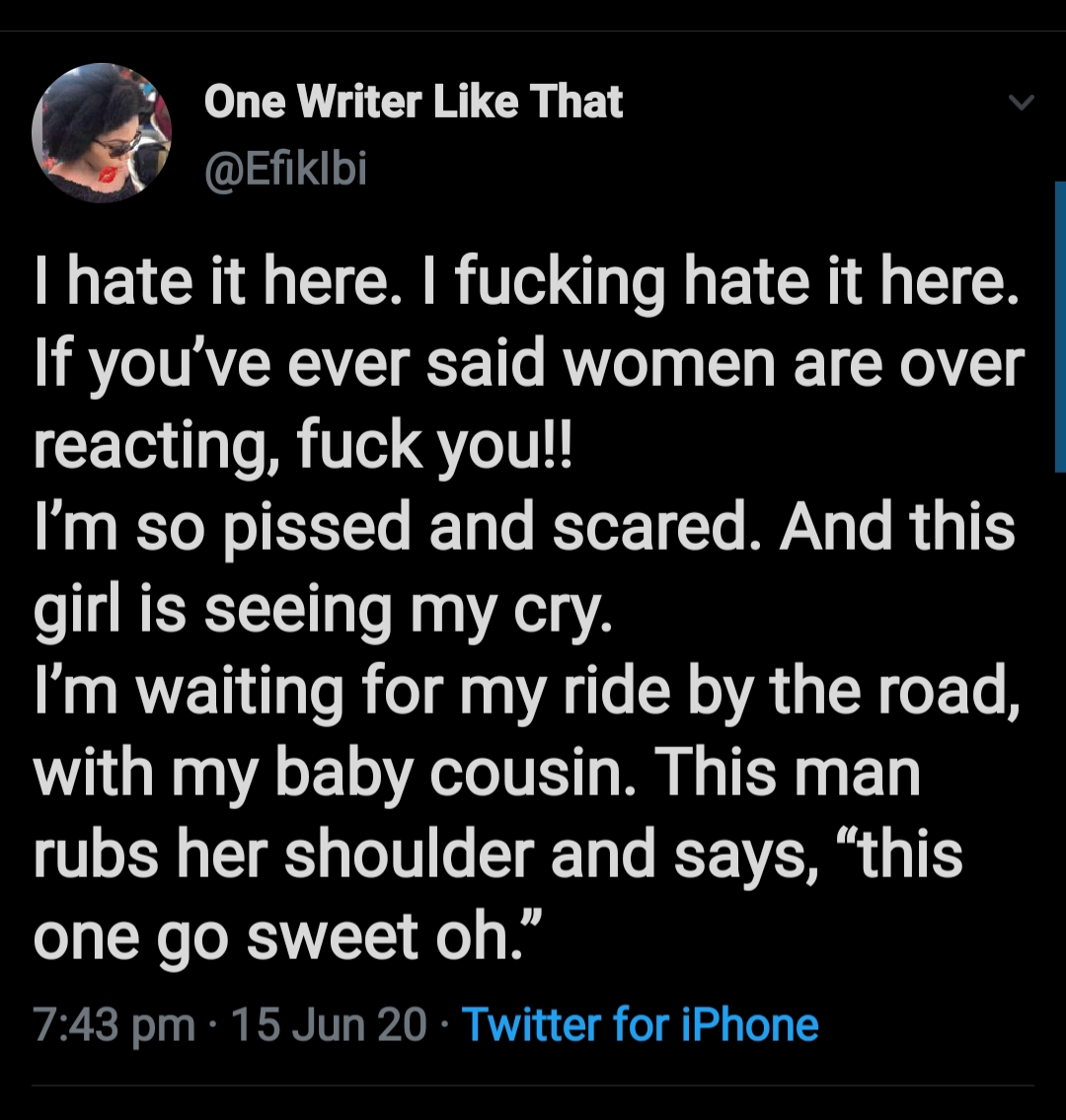 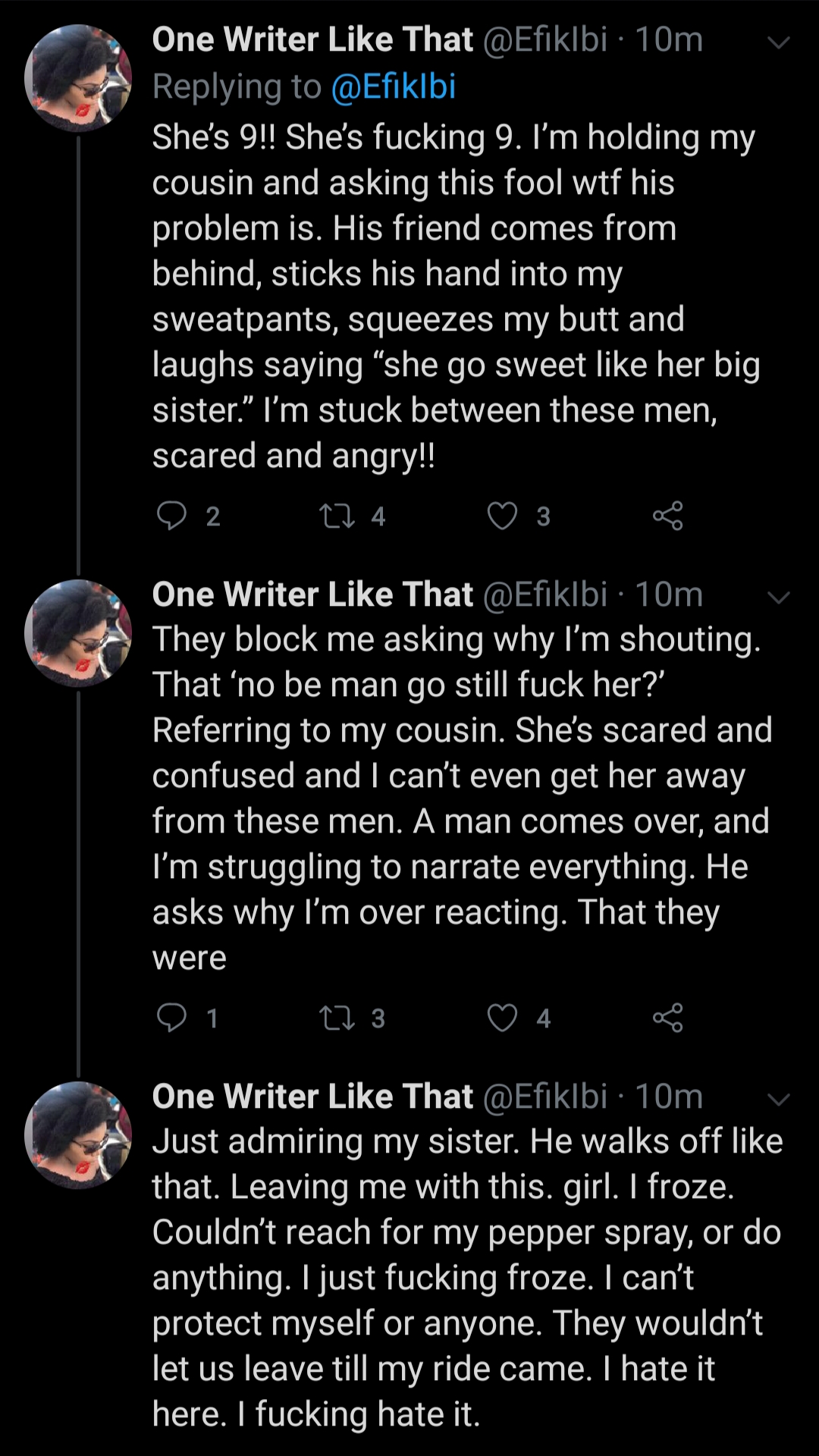 For many women in Nigeria, this scenario is very common. From that man who rubs your thighs in the bus to your neighbour who is stylishly rubbing your back as you sit together gisting and your colleagues who continuously talk about your body shape, sexual harassment is everywhere and it comes in very subtle forms.

When we talk of sexual harassment and rape, many people assume that it must be violent -with the victim incurring all manner of injuries, and blood flooding down their thighs. But it is not always so.

With the consistent reporting of victims of rape and sexual assault, you might be tempted to believe that there is a rise in these violent crimes. But the truth is that there is no surge. More people are only just finding out about how deeply rooted this malaise is, within the Nigerian society.

The advent of social media and the encouragement rape victims are now getting to speak up is one of the many reasons we are getting more rape reports. We have also gotten to a point where people cannot look away and pretend that “women are just overreacting”.

From January to May 2020 – that is, 5 months, Nigeria has recorded 717 rape cases. This was disclosed by the Inspector-General of Police, Mohammed Adamu. One rape case is also reported every five hours.

Why is rape so prevalent in Nigeria?

Na from clap dance they start.

When you think of this Nigerian idiom, you will understand why today, the rape cases in Nigeria have spiraled and almost gone out of control, thus leaving many women scared and always ready to defend themselves.

Efik Ibi‘s experience gives us a glimpse into the life of so many women in Nigeria. An average Nigerian man does not understand boundaries when it comes to a woman’s body. It is from touching a little girl’s cheek and smiling sheepishly while chanting “my wife”, or rubbing her body slowly that men eventually graduate to slipping one or two fingers into the girl’s private parts and then slipping in their manhood.

On one evening, Dele (not real name) was talking to his neigbour, Funke (not real name) and was jokingly slipping his hands into her back. She warned him to stop, but then he removed his hands and placed it on her arm. He slid his arms gently from her shoulder down to her hands. She warned him again, but he kept doing it, laughing and making jokes about it. Funke realised that Dele thought it was a joke, but she wasn’t going to pass on the opportunity to teach him about consent and sexual harassment. So he asked Dele to sit and they talked about it. He vehemently refused that what he was doing was harassment, stating that it was his intentions that mattered the most. He insisted that you can only harass a girl if your intentions are not pure. For instance, if you constantly touch a girl without the intention to rape her, you are still not harassing her. If you are constantly touching a girl and your manhood is not hardened, you are not harassing her. It doesn’t matter if she says no or asks you to stop, all that matters is that your heart is clean.

Dele then went further to explain that that is the way he jokes with his female colleagues at work – he touches them at will and something even slips in one or two raunchy words. But they all laugh about it because they know he is only joking and he has no bad intentions.

Just like Dele, this is the average thought-process of many Nigerians; they see sexual harassment as a joke, something that should not be taken seriously. That is why that conductor will shout “ah, see yansh” as a woman passes by and people will laugh over it. That is why colleagues can easily slap each other’s buttocks and they will laugh over it. That is why male lecturers will press a female student’s breasts and when they notice that she is uncomfortable, they will chuckle and say “I’m just joking”.

Sexual harassment has been so normalised. It seeped gradually into every cranny of the country and eroded the line between sexual sanity and insanity. We planted the seed, we watered the plant and now we wonder how we have gotten to this stage where a woman is raped every five hours in Nigeria. Social vices are like little flames of fire, if you don’t quench them immediately, they grow into infernos that cannot be easily put out.

As sad as this might sound, the only reason why Nigerians – both men and women – jointly spoke against the rape of Uwa, Barakat, Jennifer, and Grace and condemned the act is because these young women lost their lives in the process. If they were still alive, we would have gone into the shameful charade of having to explain to adults why rape is bad.

We need to take sensitization to the streets. This can be done by enlightening your neighbours on sexual harassment and rape. We need to let people know it is not right, neither is it funny.

There is no sensitization as effective as a few years behind bars. This is where every sexual violator and rapist belongs. And this is where the government and our law enforcement agencies come in.

Governors in all 36 states resolved to declare a state of emergency over rape and other gender-based violence against women and children in Nigeria. However, we hope this is not one of the major audio promises made by Nigerian leaders.

When Adamu in Bauchi is sent to prison for sexual harassment, Tamuno in Port-Harcourt is sent to prison for rape, Lekan in Ogun is sentenced to life imprisonment for raping a 3-month-old baby, and Ubong in Akwa Ibom is facing heavy penalties for raising a lady’s skirt as she walked past, all other sexual predators will receive brain and behave.

Nigeria should also create laws that trump all religious beliefs. Senator Adamu Aliero of Kebbi Central, who was once a governor of Kebbi state, claims that according to his religion, a woman should be married off once she reaches puberty, although under the Child Rights Act 2003, the minimum legal age of marriage is 18 years.

According to Adamu Aliero, “it is not the age that matters, it is her body features”.

Child act right puts age limit for a girl to marry..but Islamic law says she can marry once she reaches puberty..the age is not important, but body features. Muslims can’t negotiate this with anything else – Senator M. Aliero-Kebbi central & Fmr governor??‍♀️pic.twitter.com/kQlq9FNgPO

If Nigeria is indeed a secular State, then a religious law should never be placed above state law.

As long as men don’t see women as equal, they will continually believe that they have a right to women’s bodies, with or without their approval. We need to end the culture of women being seen as subordinates to men.

‘You should be happy sef that I touch you” says a man who feels entitled to a woman’s body.

“No be man go marry you laslas?” Says a man who believes that a woman’s existence and body should revolve round a man.

Women must never get tired of sensitizing people about sexual harassment and rape, calling for equality, and pushing for justice for all victims of sexual violence.

This is a battle that must be won.

BN Prose – Book Excerpt: Back To One by Lolade Pearse