Nigerians are Not Happy about the New NIPOST Fee

Have you heard about the new cost of licences from the Nigerian Postal Service (NIPOST) for courier services across the country?

It’s a lot of money, as seen in a circular released by the service.

Companies that provide international courier services, like DHL and UPS, will now be liable to pay ₦20 million for a new license, and ₦8 million renewal (which, according to Punch, will be annual).

Those who provide national services will have to pay ₦10 million for a new license and ₦4 million for a renewal. Regional, state and municipal services are to pay ₦5 million, ₦2 million, and ₦1 million license fees respectively, and ₦2 million, ₦800,000 and ₦400,000 for renewals. For small- and medium-sized enterprises, it’s a ₦250,00 fee for licenses and ₦100,000 for renewals.

There is also a ₦20,000 fee for “application forms and regulatory guidelines.” 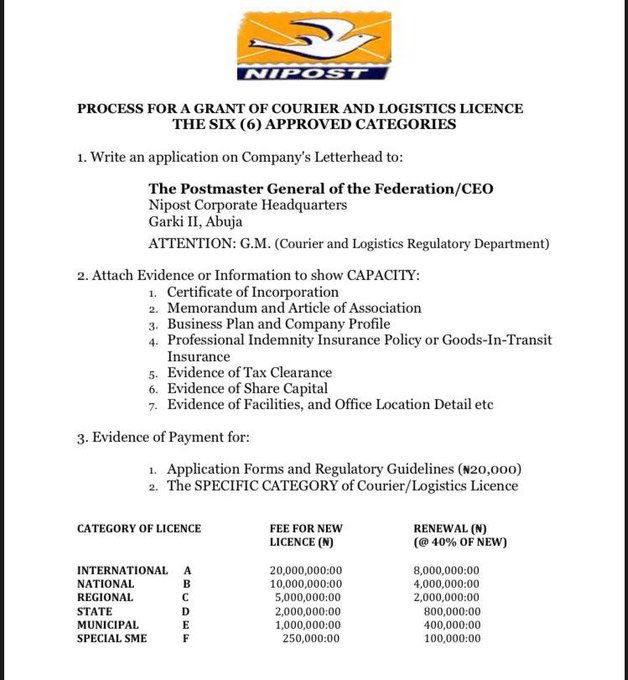 Nigerians are expressing their disapproval of the fee, complaining that it is only another burden on entrepreneurs who are operating in an already difficult business landscape.

They’re saying NIPOST cannot act as a competitor and a regulator at the same time, as it also provides the same services these companies it is taxing provide.

There’s also a petition to have the fee structure removed, and you can find that HERE.

NIPOST, on their part, have released a statement saying the fees are to “ensure effective service delivery as consumers would know the capacities of the operators they are dealing with.”

Check out what Nigerians are saying:

@NigeriaGov, ease of doing business, includes not arbitrarily disrupting the smooth flow of goods and services. @NipostNgn website has been down for months, no one can track packages enroute. Now courier that are effectively, helping out are being shut with new draconic charges.

Let me get this straight.

NIPOST bought a bunch of bikes and decided to tax the competition out of the market. Effectively monopolising a business that serves millions of people.

This should be illegal and I'll be writing my reps in the National Assembly on it.

If Nipost was efficient

We won't have to use dispatch riders.

If you're a country as poor as Nigeria, you should small businesses

Same country expects the woman with one small shop to add an extra 6% to rent, with no power

Even surviving is now difficult

NIPOST should not be allowed to charge these ridiculous fees, @femigbaja. Thousands of young Nigerians have lost jobs in the last few months. Some turned to courier services. A friend who lost his job bought these from Oride. Please don’t let him commit suicide. #SayNoToNipostFee pic.twitter.com/p9j3Jz5BVl

At a time when govts all around the world (including Nigerian state govts) are reducing taxes, granting tax holidays and helping out small businesses, the Federal Govt wants to enforce Stamp Duty and NIPOST Courier Licence fees? I don’t get it.

NIPOST has the audacity to ask for business plans as regulatory documents. Lmaoooooo. So that they will use everything for their own business. How can people be so wicked.

When it’s not that they’re giving loans. #SayNoToNipostFee

Found a list of all National Assembly members and their contacts on this site https://t.co/Ee85GLJtKa. Please let’s start reaching out to our reps about this NIPOST nonsense. We have to try, at least. Ranting on twitter alone won’t solve the problem!!

NIPOST one of the top 3 most ineffective government agency want to monopolize logistics. Imagine ordering food and waiting for NIPOST to deliver it, they'll bring it 3 days later. Last time I used them they shouted at me to come and get my parcel from their office

Mr CEO, how did he arrive at these figures? Some of these companies don't make this much in an entire year. Union levy, agbero levy, LG levy, Lagos state levy, Nipost levy..
Bombard the lines and email till this rubbish is cancelled..50 mails / 50 calls per day#SayNoToNipostFee pic.twitter.com/6dsEZl2r6J

It is very worrying that our leaders are so removed from the impact of their policies on ordinary Nigerians & even entire categories. We saw it with the NBC proposed newcodes. We are seeing it with this NIPOST thing. Policies that destroy investments. It has to end.

NIPOST have not even been able to deliver small small AliExpress packages successfully and they want to add SMEs ??

How can you regulate those you are competing with? It’s like Arsenal playing Liverpool while the Arsenal manager is also the referee. NIPOST cannot play & regulate. The same applies to any system anywhere that practises this. It is anti-progressive, cronyistic and just stupid!

NIPOST is one of those regulators in Nigeria that doubles as a player, ie also competing with Nigerians who struggle to make the system better. An inefficient regulator stifling the growth of the sector to Favour its inefficiencies. I have two friends in entertainment, a DJ & MC.

NURTW successfully got OPay to come settle it
NTA successfully got NBC to pass a policy to force others to share their own content for peanuts
NIPOST is also about to make private operators pay for providing a service that it has not been able to provide.
Who's next?

It’s True, the US Court has Dismissed the Complaint against Mr. Woodbery – Here’s Why