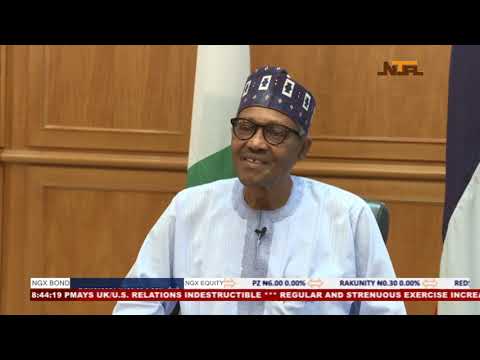 President Muhammadu Buhari gave another televised interview to update Nigerians on his administration’s accomplishments and difficulties, which will be six years old on May 29.

On Friday, a 30-minute interview with Buhari broadcast on NTA.

If you missed his interview with Arise News, you can see it here.

On how his administration has impacted Nigeria so far

I want Nigeria to be fair to this administration. They should reflect seriously at the time we came especially relative to northeast and south-south. Where we are now… how much were we producing over the previous administration before we came was producing 2.1 million barrels a day, average at a price cost of 100 American dollars per barrel. When we came, somehow the militants in the south-south were unleashed on this administration and production went down to half a million barrels a day. Again the oil market collapsed. So I will like Nigerians to reflect on those in terms of resources and time. And I believe we haven’t done very badly.

On Riot Act, and what he meant by “We’ll treat them in the language they understand”

…how can you go to a police station, kill the police if they’re there, loot the armoury, and burn the place? What do you want to achieve? Go and open the prison and allow criminals that have been tried through the legal system and let them loose on the society. And how can government sit aside and allow that confusion to be perpetrated? All they need is confusion and no government can allow confusion.

Look at the #EndSARS incident in Lagos, the previous governor of Lagos State, bought 200 buses to complement the transportation in Lagos and he built a complex involving railways but they went and burnt them. The present governor made an album and came to see mem I said, “thank you very much.” I took the album put it in my archive and legislation to work because we don’t have the money after an administration bought over 200 buses for some people to come and burn it. So let them walk.

I hope to arrest them, try them, and give them very bad publicity, and then jail them so that people will know that if they misbehave, they won’t get away with it.

On Nigerians accusing him of playing ‘Double standards’

They are being unfair. They should go and ask the governors of Sokoto, Zamfara, Katsina, and ask how we’ve been deploying the police and the military to deal with the bandits. We are not sparing anybody. Nigeria is vast and there are a lot of forests.

…We are doing a lot, the problem is if you order helicopters, you order fighter aircraft, you order tanks, it takes time. We got our vehicles from Jordan from China, and these things, you have to take them to institutions where they will be doing ‘train the trainer’. You get people to train them Nigerians, stock spare parts before you send them to the operational area. These things take time, especially when you are doing a foreign exchange, but in a quiet way if you can talk to some of your colleagues in the air force or in the army, tell them where were they or where were we in 2015, and where are we now in terms of equipment, training.

On the situation of the econony

No, I’m not (satisfied with the state of the economy), that’s why I’m trying to make the people become accountable and to make sure we persuade the foreign countries to allow their multinationals to develop confidence in Nigeria, and come and invest. When they develop more confidence in Nigeria, that will give us employment, that will provide us with goods and services, and the chain right from the farms of what you know, will be great, and that means a lot of employment. And this is our problem, large population, young population, unemployed population.

On the termination of his tenure

I hate fraud in any form if I haven’t made this statement and made it absolutely clear, and I have sworn to uphold the constitution and the constitution said you can’t do more than two terms. I have shown I had the first time, and before the first term, I went to all the 774 local government. In the second term, I went to every state in 2019 and I made a remarkable observation. The amount of people that came to see me in every state across the country were more than what anyone can buy or force. I am very pleased that Nigerians deliberately made an attempt to understand me and that I will stand by my oath of office, that I will serve this country, honestly and diligently.

On what gives him joy on what his administration has achieved

No matter how reluctantly the majority of Nigerians are understanding, and appreciating the effort we are making, because right from the go… we identity our problem. One security, two economy of people, and trying to fight corruption, people getting something for nothing. You have to make sure that people earn their living and they will defend it.