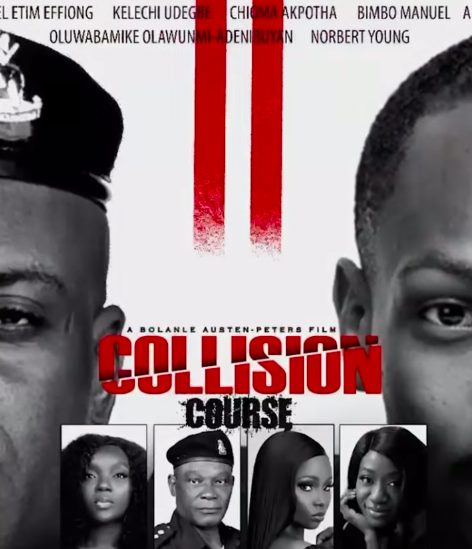 “Collision Course“,  Bolanle Austen-Peters directed feature film has been announced as the official closing film for this year’s Africa International Film Festival (AFRIFF), where 19 Nigerian films making it to the official selection, from a total of 48 productions, including 16 feature films, 14 documentaries, and 7 animated films.

“Collision Course,” tells the story of the two worlds of a law enforcement officer and an aspiring musician whose worlds collide. It is a depiction of the realities of the average policeman and a young music artist. It stars Chioma Chukwuka Akpotha, Ade Laoye, Kenneth Okolie, Daniel Etim Effiong, Bimbo Manuel, Gregory Ojefua, Bamike Olawunmi-Adenibuyan (BamBam), Kalu Ikeagwu, and Nobert Young.

Other Nigerian films selected for AFRIFF 2021 are “The Takers“, “Tainted Canvas“, “Juju Stories“, “Country Hard“, “The Hero’s Walk“, “Road2Blow“, and “Hope” to mention a few.

AFRIFF also announced seasoned global entertainment executive, Jenny Alonzo, as Creative Director for its 10th-anniversary edition. The move comes as AFRIFF continues to solidify itself as Africa’s most innovative film festival, celebrating African content, filmmaking and a unique platform for the many stories Africa has to share with the world. AFRIFF is focused on building the necessary bridge with the rest of the world.

“I’m both humbled and excited to be working with Chioma Ude on AFRIFF. This festival is a hidden gem. AFRIFF has been a champion for African filmmakers and Chioma’s mission to amplify and elevate the stories about Africa, Africans, and its Diaspora is right in line with what my brand represents—telling and amplifying stories about women and diverse markets that continue to lead global growth. I’m proud to be working with someone who demonstrates a commitment to paying it forward and to opening doors for those with limited access, which is still a huge problem in filmmaking and entertainment.

Alonzo, continued, “Africa is truly the richest continent in the world and yet the stories we see paint a different picture. AFRIFF is doing everything it can to change that by providing a platform for filmmakers to showcase their work and for buyers to experience authentically rich stories they can bring to the world. Chioma is on a mission to ensure AFRIFF becomes the “must attend” film festival of Africa. I’m honoured to join her on this mission,” stated Alonzo.

Speaking on the new appointment, AFRIFF founder, Chioma Ude, stated “AFRIFF has continued to scale new heights year after year. After the last 18 months with the pandemic, I am beyond excited to welcome a seasoned entertainment powerhouse such as Jenny Alonzo to join our great team as Creative Director. Adding Jenny to the team further solidifies the foundations built over the years by a very hard-working team. Her addition only adds to our growth. Welcome to the team, Jenny.”