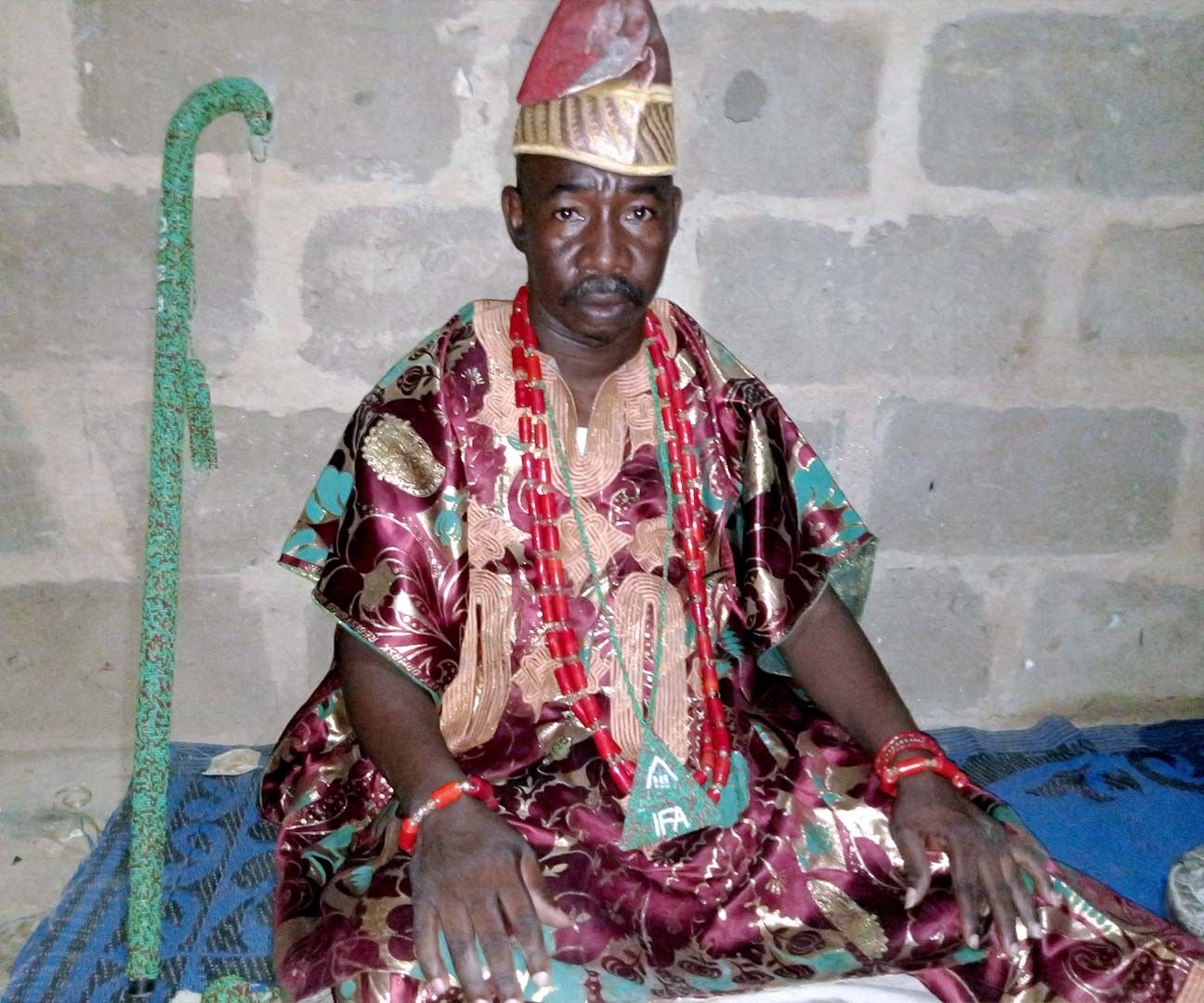 Call it a temple, if you like. To most, it looks just like any other modern office in Lagos.

The “CEO” here is Chief Ifakolawole Matilekun. Like his counterpart across town, Chief Sunday Ademolaji, Matilekun’s style of dress and general lifestyle are very much in keeping with a successful CEO. That includes everything from a luxury vehicle, to demeanour.

However, neither man is a CEO in the modern sense of the word; though both run large organisations, they are not businessmen but diviners – known by Yoruba followers of the Ifa religion, as Babalawos. Diviner, soothsayer.

Chief Ademolaji explained that many people mistake Ifa divination for the local equivalent of the astrological or Chinese horoscope, its practice akin to the reading of a Tarot card. It is so much more, he explained. 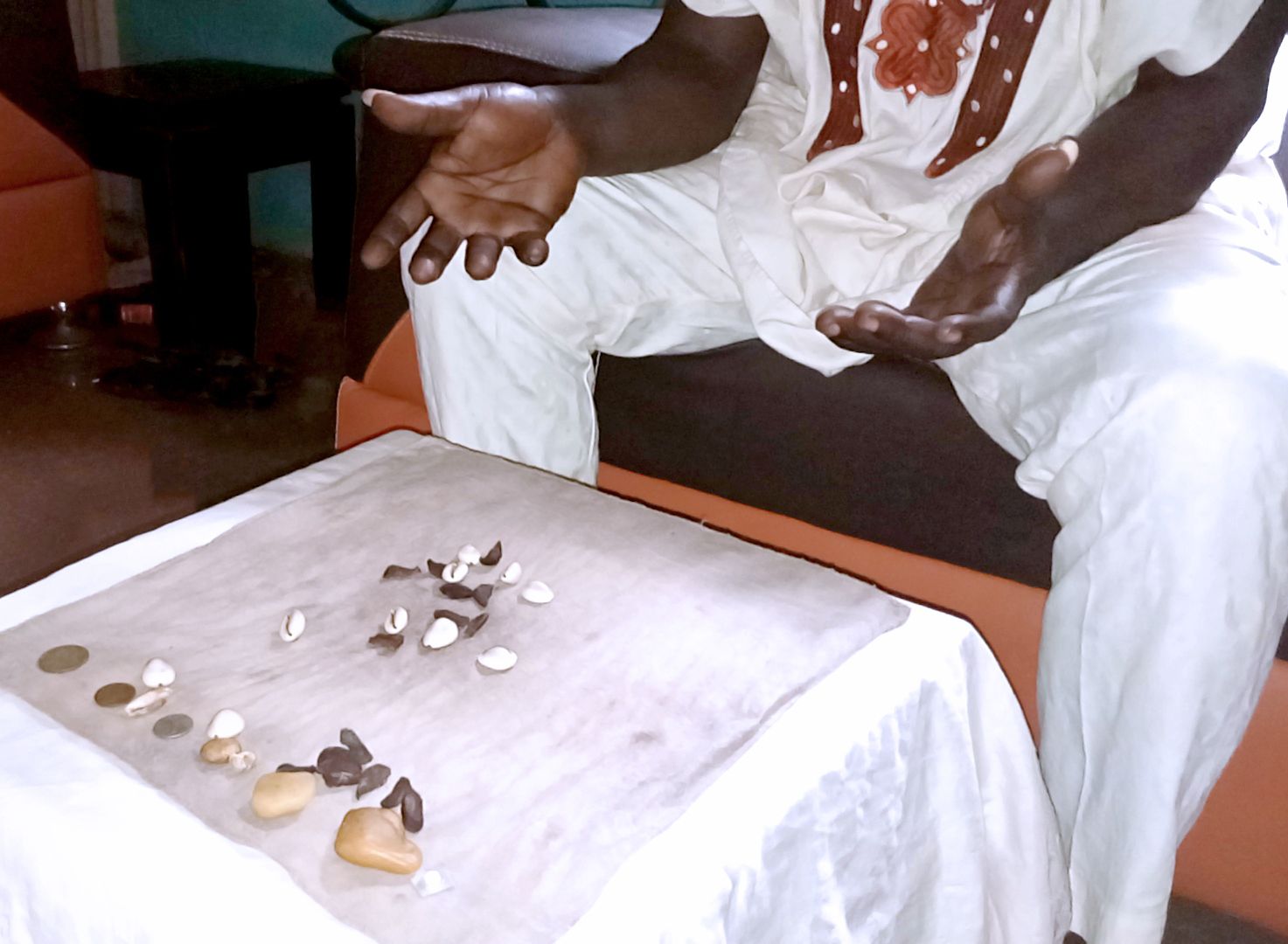 “It’s a way of life. It’s about how life ought to be and the overall existence of human beings and the universe, our correlation with the metaphysical. It transcends more than these things,” he said.

“I’ve been doing this since I was five years old. Ifa is Elerin-Ipin (the witness of creation). So Ifa can help humans out of whatever problems they encounter in life because Ifa was there when humans were created,” declares Chief Ademolaji.

Many have scorned the practices and their bearers, dismissing them outright, either for religious or for cultural reasons. Modern life in Africa’s big cities seems to have little time for traditional belief systems. But for Chief Matilekun and Chief Ademolaji, theirs is a higher calling and there is nothing sinister to fear or loath about what they do.

“It’s essential to have a deep understanding of these things because it’s an emphasis on culture. It’s not about whose religion is better. We are all under one umbrella, under one God. For example, I’m Christian, I attend Methodist Church, and I believe in tithing. I also strongly believe in Ifa. Being a Christian doesn’t clash with my Ifa worship. My father and forefathers were Methodists and Ifa priests, there’s no division,” said Chief Matikekun.

In Yoruba society, Babalawos are highly respected. Before the arrival of Christianity, they were considered part of the bedrock of society and everyone sought advice from them. They were like the “prime ministers” of Yorubaland and Babalawos had a say in society’s structure, all the way from the king’s palace to a blacksmith’s house. 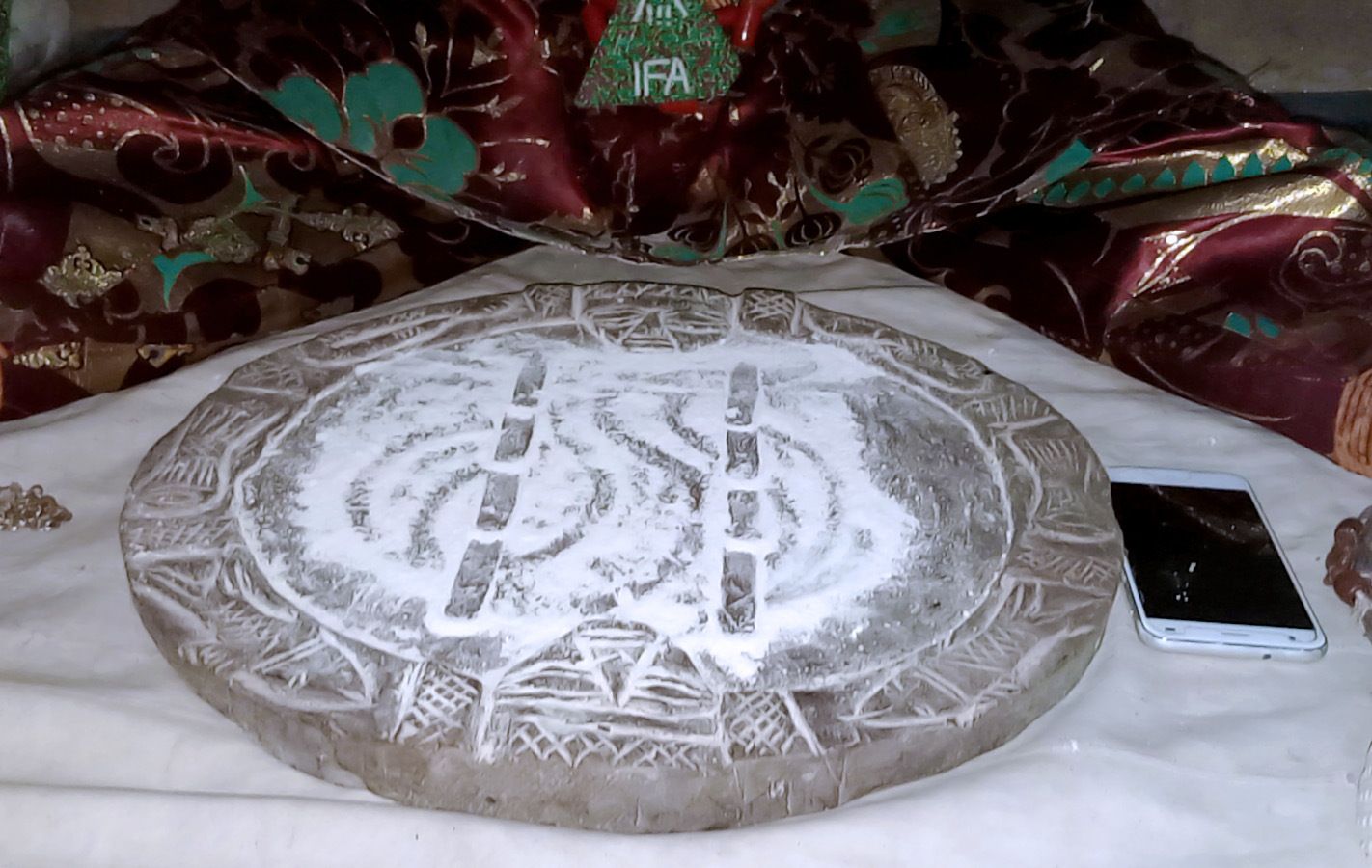 However, their relevance was reduced during colonization, their influence was shunned and cast as “evil”. Colonisation introduced a new religion: Christianity.

Christianity relegated Ifa to the backwaters and most of the people who had lived by the cultural and religious code for generations lost all understanding of what it entailed. It was painted as inferior, brutish, archaic and only associated with illiterates. Ifa priesthood survived, however, and today is in well-educated intellectuals. Being an Ifa priest requires dedication, patience and comes with the responsibility of holding on to a vast trove of cultural and historical knowledge.

“Being an Ifa priest is more than just skill or worshipping Ifa. It is about knowing the origin, history and legacy of Yoruba culture. It’s the exploration of the semantics of specific words and their usage. These words give deeper meanings to the most ordinary things. It’s not just about having the Opele (divination chain) or foresight, it’s also about having the understanding,” said Chief Matilekun.

For those who understand how tarot readings are done, grasping the knowledge of Ifa readings comes easy. In a tarot deck, there are 22 Major Arcana cards and 56 Minor Arcana cards and each illustration on a card gives the reader a revelation or prophecy. Similarly, Ifa readings comprise 256 Odu’s, and 16 Odu’s (from Egi-ogbe to Ofun-meji) are read often. The patterns, binary sequences and verses in the divination chain (Opele) provide revelations or prophesies something to its reader.

The Babalawo offices run along similar lines, with each taking on around 30 clients daily. Some arrive as early as 5 am, to increase their chances of being attended to first. Food and drink are always within reach.

New clients are expected to sign up for a membership and consultation card before the first meeting. Money exchanges hands for each consultation before a reading is done, but the amount is determined by the client. Stipulated charges arise when the Ifa reading shows the need for appeasement. The type of appeasement determines the amount of money the Ifa Priest will collect – and that can range from 500 naira (1.22 US dollars) to as high as 5 million naira (12,151USD) and occasionally even more. 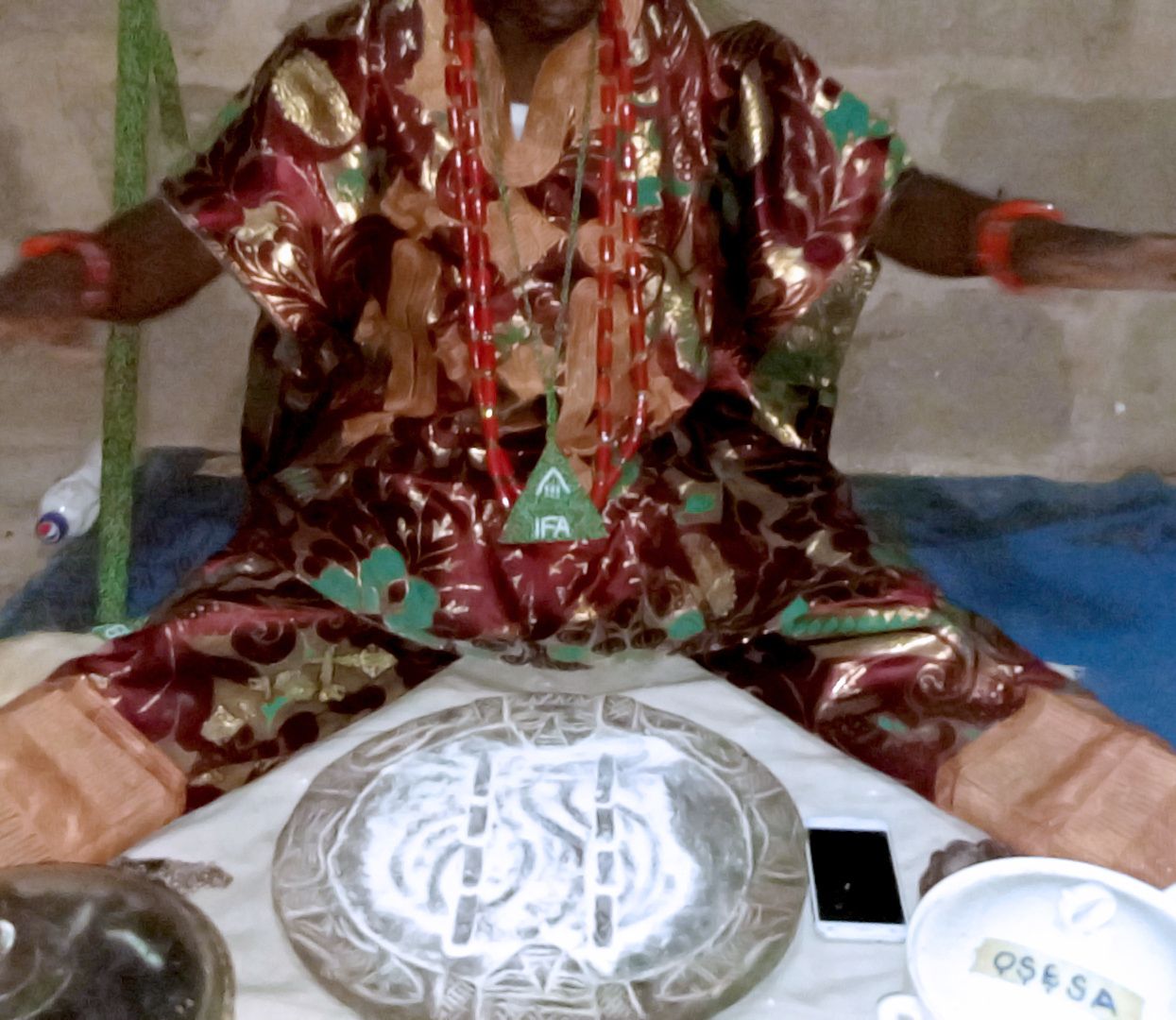 Hotel rooms are available for clients who come from out of state to meet with the Ifa priest, while for those who can’t make it, the Babalawo will provide a consultation virtually.

The clients cut across age, class, ethnicity and calling. Clients often interact with each other while waiting for their appointments and some form lifelong friendships. The Babalawos office employees are paid monthly, but they also get tips, gifts and presents from clients, they say.

Chief Sunday Ademolaji and Chief Matilekun believe divination broadens their view of the world. Being a Babalawo is more than just about knowledge, however. It is also about excellent character and there is an emphasis on good behaviour.

“Patience, tolerance, calmness, forgiveness and perseverance are some virtues a Babalawo needs to have. One would make a lot of mistakes without those virtues, derailing from the good path set for someone who has this calling,” Matilekun added.

In terms of the correlation between Ifa and other religions, Ademolaji explained how the different patterns show in an Ifa reading to direct the path of a person.

“We consult Ifa about a child’s life on the eighth day. Ifa picks out the religion of a child sometimes. Ifa Ela shown during a reading (it) means Ifa is telling that child to become a Christian. And if Oragun-meji (Ofun-meji) shows, it means being a Muslim is the best path for that child, according to Ifa.”

“Knowing your purpose on earth is vital. It gives you good mental health. It stops depression, confusion, and anxiety. Ifa helps you find your purpose, know more about your life, career, family, health and everything in between. Ifa ni llu mo na (Ifa directs your path). Ifa ni a to ni sona (Ifa guides your path),” Ademolaji explained. 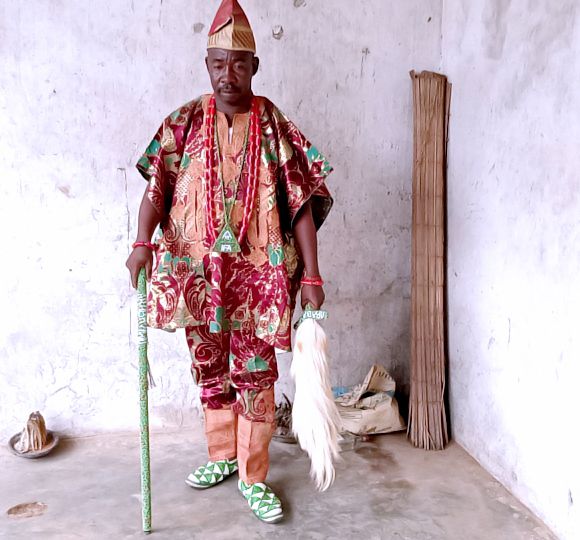 As a part-time lecturer of the Yoruba language, Chief Matilekun believes that culture and tradition are the only things that sustain history.

“At the University, there’s a course called Asa ati Ise (culture and tradition). That’s one thing that didn’t let the Yoruba language die off. Any Orisa (god) that isn’t shown to a child or a new generation goes extinct. The knowledge that is withheld becomes obsolete. There are 356 Orishas (gods) in the world, and 201 of them are in Yorubaland. Names like Ogunbiyi (God of Iron birthed this), Ifakorede (Ifa brought blessing), Sangofumbi (God of Thunder gave me this child) signify the home a person comes from, and what kind of god their ancestors worshipped,” he said.

With growing interest in African cultures both among those in the diaspora and those “at home” in Africa, the surviving Ifa priests believe they can offer a pathway back to their society’s cultural roots.

“I’m always delighted to teach people about Ifa, what it takes to be a Babalawo, and the nuances of the Yoruba language. It’s my way of giving back to society, helping to sustain our tradition. I’ve never believed in disregarding other people’s beliefs. We are all under the same sky, controlled by the same elements. There’s no reason for scorn. Therefore, I’m never offended when some people react negatively to me when they discover I’m a Babalawo. They’re just ignorant. I always enlighten them. Ifa is about enlightenment,” Chief Matilekun adds.