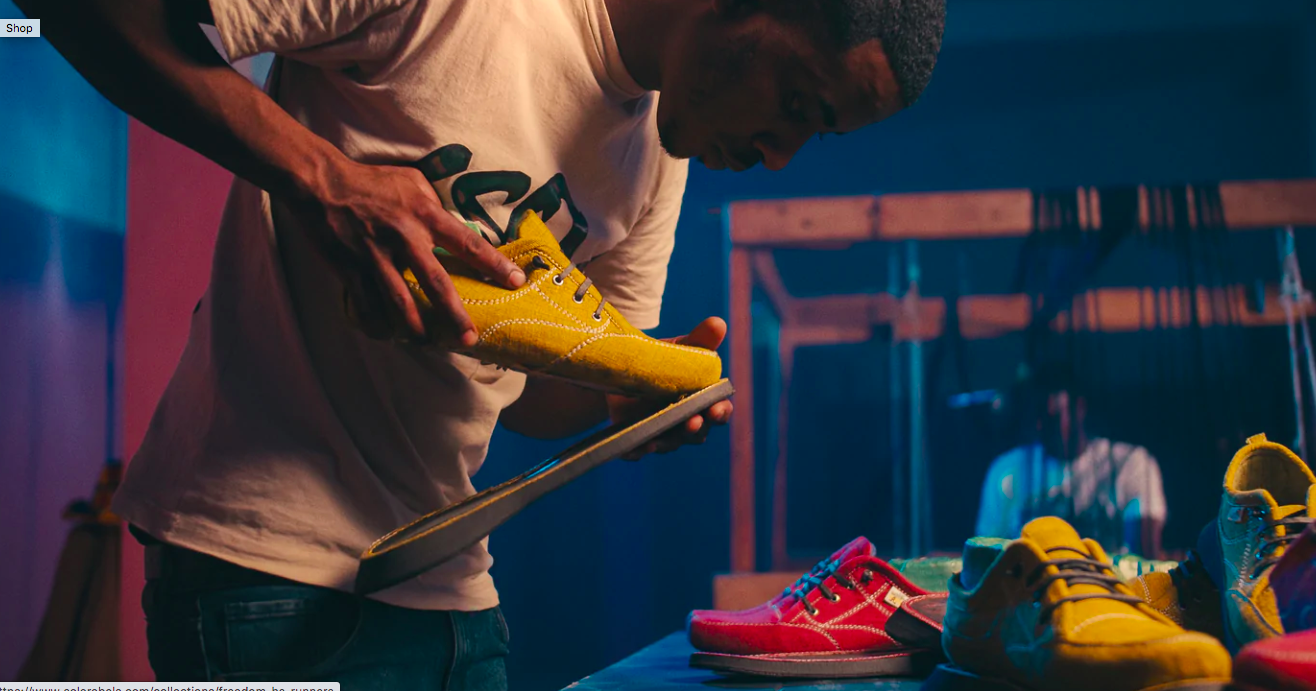 A storefront situated between distinctive rock outcrops in the Gwarandok community in Jos reveals a display of locally-made shoes whose perfect stitching is a tribute to hand-crafted luxury wear. Inside, a social-media-led initiative offers Zoom classes to would-be shoemakers from across the globe. Welcome to the brave new world of African footwear.

“Over 90 per cent of the current Nigeria shoe market share is controlled by China and Europe,” said Daniel Dung-Gwom. With their Jmofs shoes, he and his brother Gyang are on a mission to change that with what Dung-Gwom refers to as an “Afrocentric brand with a global appeal”.

“Jmofs… as a brand, is on a mission to build the foremost appeal brand in Africa within the next eight years with branches across the continent,” said Dung-Gwom.

The brand, an acronym that stands for “Just men on fire” reflects their passion not only for creating footwear but also for building an African luxury brand. That passion extends from their location in Jos, well beyond Nigeria, especially now that the brothers have boosted their virtual presence.

“It was a cheeky initiative that has over time developed into an academy to expand the continental statement on shoemaking. Our objective is to train aspiring shoemakers to be independent or to have a better chance of being recruited by big companies,” Dung-Gwom said of their wider enterprise, which includes online training.

Daniel, 34, and Gyang,37, both trained as cobblers before turning to shoe design. But their journey goes back much further.

The two started their first shoe “enterprise” aged just 7 and 10. In Nigeria, as in many other parts of Africa, cobblers are usually older people with little or no formal education, with lowly status and earnings. Little wonder the two budding cobblers were reluctant to tell their father about their new business idea.

“When my brother and I decided to start fixing shoes, we weren’t sure about how our father would take the news. We were both very happy and shocked when he encouraged us,” said Dung-Gwom. 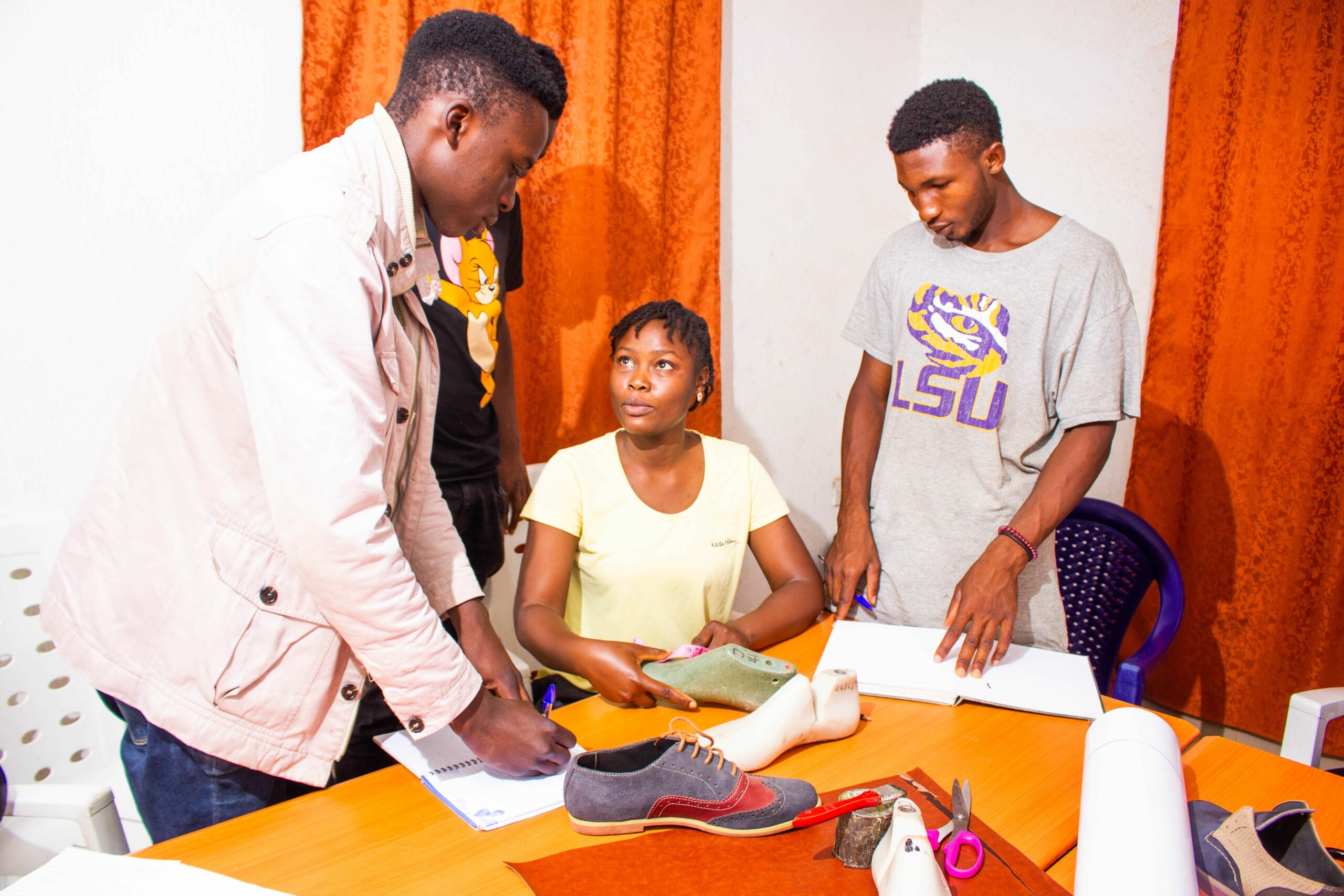 For them, their “little mischief” was meant to raise money to satiate their childhood cravings: kuli-kuli (a snack made from groundnuts) and garri (cassava flakes).

The brothers – inseparable in their younger days – are the third and fourth siblings in a family with five children. With their father a professor at the University of Jos and their mother an administrator at Plateau State Polytechnic, the two might well have been expected to follow academic careers.

But there was no such pressure. Instead, the two primary school children collected old shoes from their friends and placed them under a table they set up as a workstation in front of their house, to attract customers.

“It wasn’t so hard for us to set up our workplace, Gyang had the shoe-making thread and needle we were using to mend our friend’s shoes, and we soon got into the business,” Dung-Gwom explained with a smile.

Their rate was 2 naira (around half a US cent) per repair. Almost as soon as the money was handed over, it was quickly spent on kuli-kuli and garri. There were no savings.

27 years later, their shoe business is a very different affair.

While both brothers did attend university after school, Gyang never lost his love for shoemaking. In 2008 he started buying and selling shoes as a business. He soon realised that he could make some of the shoes he was trading, himself, and he started a manufacturing company called “J-made”, a name that was meant to imply “made in Jos”.

“We had this sewing machine in the house and he started making his shoes,” Daniel said. “We loved the first few pairs that he made.”

In 2010, Gyang asked his younger brother, by this time a tech enthusiast imbued with an entrepreneurial spirit and a thorough knowledge of shoes, to help him with research.

“Helping my brother… ignited my love for shoes, and I began to see the brighter picture in shoemaking and ideas on how we can succeed and empower others,” said the younger Dung-Gwom.

Today, the glass-fronted building in Jos is not only their display space but is also home to Jmofs Academy, an initiative that is a result of daring to dream big about what had started as a ‘boyish adventure’.

Through the academy, the Dung-Gwom brothers plan to train about 2,000 young people in shoemaking to create the next generation of African shoemakers – although it is not only Africans who are interested.

“When I got the idea for the academy, I had the global audience in mind. I wanted to start with Nigeria, but after the advertisement, a lot turned out differently. The videos and pictures of Jmofs’ shoes attracted a global audience, and we are currently training students from seven African countries and India and Canada,” Dung-Gwom explained.

The training is not only about how to make shoes but also how to run a successful and globally competitive venture.

“The fee is between 15,000 to 30,000 naira (around 35 to 70 US dollars) with the latter being in-person training while the former is for online classes. On completion, the trainees are awarded certificates that are recognised by the (Nigerian) government,” he said. 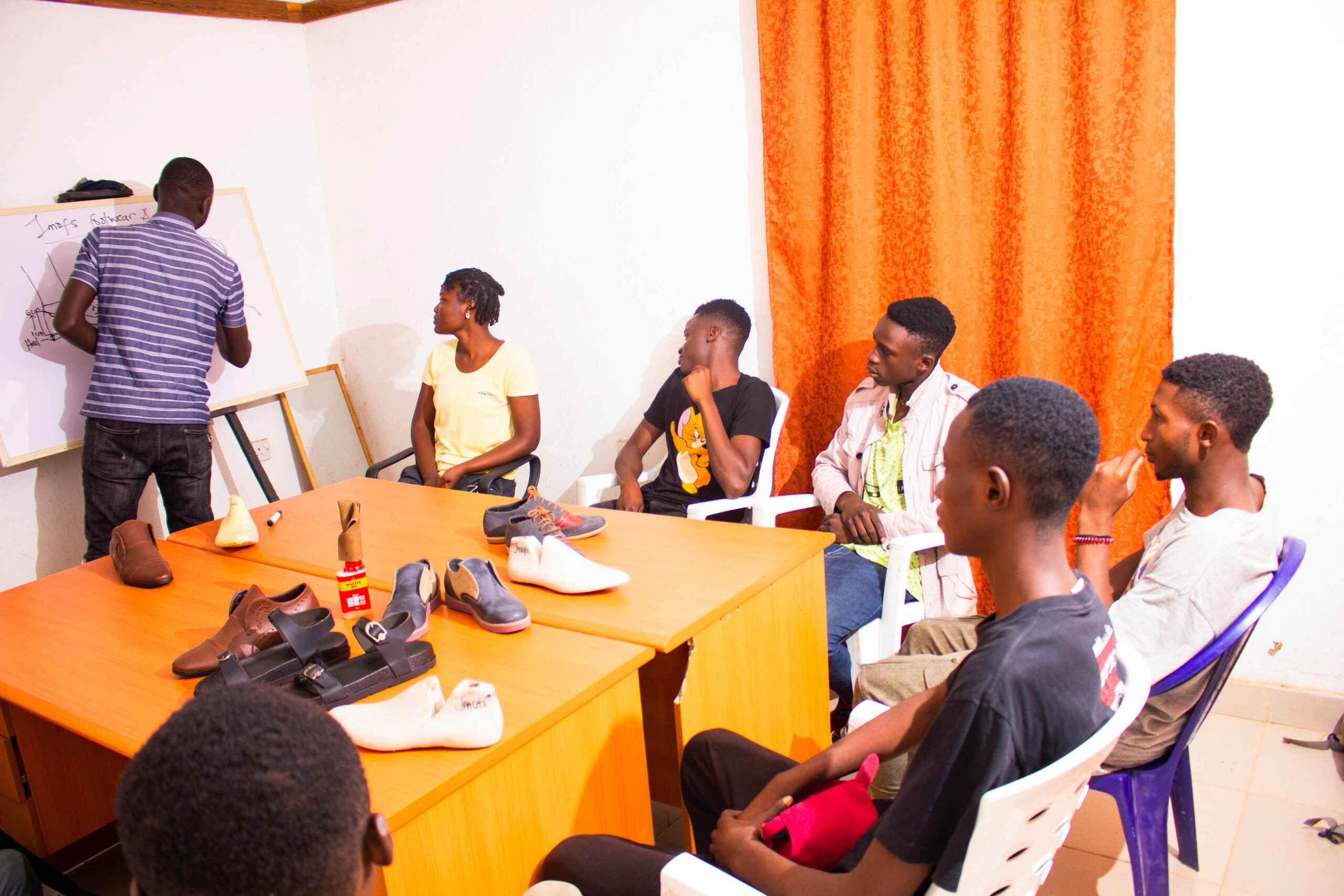 Many of the trainees are keen to start their businesses, while others attend to develop the skillsets needed to be hired by established firms.

“Not everyone can run a business effectively, so it is important that younger shoemakers are trained in shoemaking to be recruited by big companies,” Dung-Gwom said of the online courses.

Jmofs has 8 full-time staff and over twenty ad-hoc staff. The company competes locally with brands such as Abba Shoes from the State of Abia, the headquarters of Nigerian-produced shoes.

The prices of their shoes range between 10,000 and 40,000 naira, depending on the style and quality of the materials, which are sourced both locally and internationally.

These days, Gyang is a graduate of Plateau State Polytechnic and an Association of National Accountants of Nigeria (ANAN) certified accountant while Daniel is a graduate of Nassarawa State University with a degree in public administration – and Jmofs is on a path that is being followed by more and more entrepreneurs on the continent: creating brands by Africans for Africa, but with an eye on the diaspora and global market.

To take advantage of the opportunity, local shoe producers have sprung up across Africa to tap into the growing preference for trendy African-made shoes.

In South Africa, brightly coloured Bathu Shoes, which markets itself with the slogan “By Africans, For The World” and is owned by entrepreneur Theo Baloyi, has taken the country by storm. Baloyi, also a trained accountant, has opened a chain of stores and won a string of local and international awards.

In Ethiopia, one of the top shoe brands is Sole Rebels., which was founded by Bethlehem Tilahun Alemu, an Ethiopian businesswoman, in 2004. The company specialises in “artisan-crafted” shoes, many made from upcycled materials. The shoes are bright, modern and distinctive. 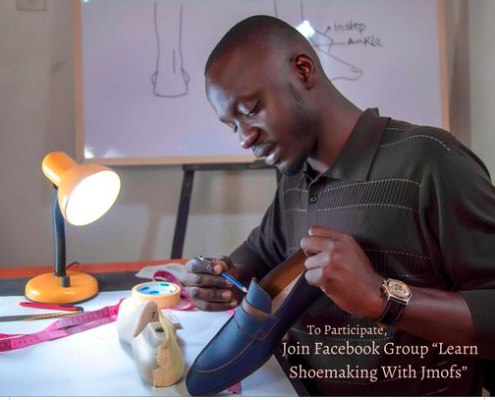 “Having grown up watching our family and neighbours struggling, we decided to create the ‘better life’ we were all waiting for by harnessing our community’s incredible artisan skills and channelling them into a sustainable, global, fair trade, footwear business,” Alemu says of her vision.

Ethiopia today exports some 30 million US dollars worth of shoes each year.

In Kenya, a firm founded in 2014 by entrepreneur Chania Lackey manufactures Swaheelies, footwear made of fabric sourced locally and from Tanzania, Uganda, and Nigeria.

According to Suki Eleuterio, the author of the blog, Found My Light, Lackey was always “interested in fashion, business, and the beautiful, diverse Kenya culture,” and has carved a niche across the region with her trendy shoe products. She is hardly alone.

According to the Times of Africa, by 2023, Africa’s footwear industry is expected to cross the 1 billion US dollar mark in terms of value and home-grown shoe enterprises have caught the attention of many local bloggers.

According to youth activist and blogger Friday Bako, “Jmofs is telling a new African story through their shoes competing with international brands.”

“We sell more through social media and word of referral besides targeting corporate professionals, elites, and schools,” said Gwom-Dung.

According to Nigerian economic analyst Marshal Bakut, the ventures by young Africans hold great promise in using local materials to creatively manufacture goods such as shoes. 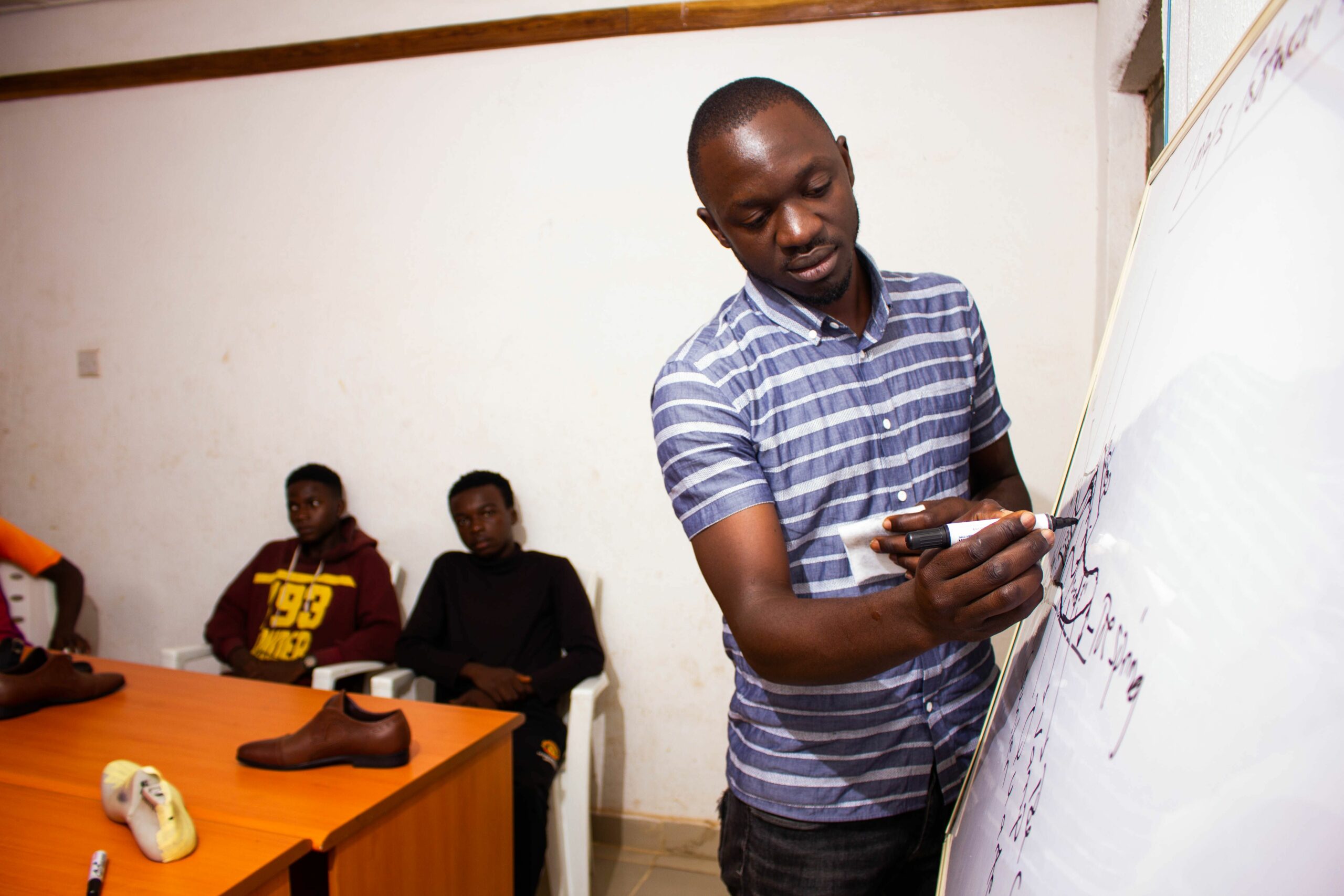 He adds that while some people may look at local start-ups as shoes as “uncool” compared to their overseas competition, in addition to tapping into the “Africa Rising” narrative, they also offer personalised services to the clientele.

“For instance, the shoe business sector, aside from its capacity to raise recurring income, provides the window for new thinking/initiative. Small businesses provoke hard work on the part of the owners; there is always the sheer need to satisfy the next customer as their referral is integral to expansion,” Bakut said.

“There is a great market waiting to be exploited, Young people must be made to understand that. Let’s start with the value chain it develops, I mean, the intermediate materials sourced locally, which invariably contributes to capital formation and improves revenue for the supplier,” he explained.

“Secondly, the local market understands the local consumer better, so the advantage lies with the local producer, not the importer.  The capacity to improve employment is another focal factor.”

The Dung-Gwom brothers are not the only ones seizing that moment. However, in their efforts to nurture the next generation of African shoemakers through their academy, they are also laying the foundation for something far bigger.

“We want to be remembered as one of the leaders of African industrialization in this journey that is now Jmofs Academy whose main objective is to project Africa’s abilities,” said Dung-Gwom.

“With the clock already ticking on our 10-year expansion vision, we are keeping our eye on the ball to ensure that what we have started at Jmofs Shoe will be part of the story of Africa’s industrialisation success,” he concluded.

Kingsley Ndimele: Money Questions You Should Ask Your Partner Before Saying “I Do”