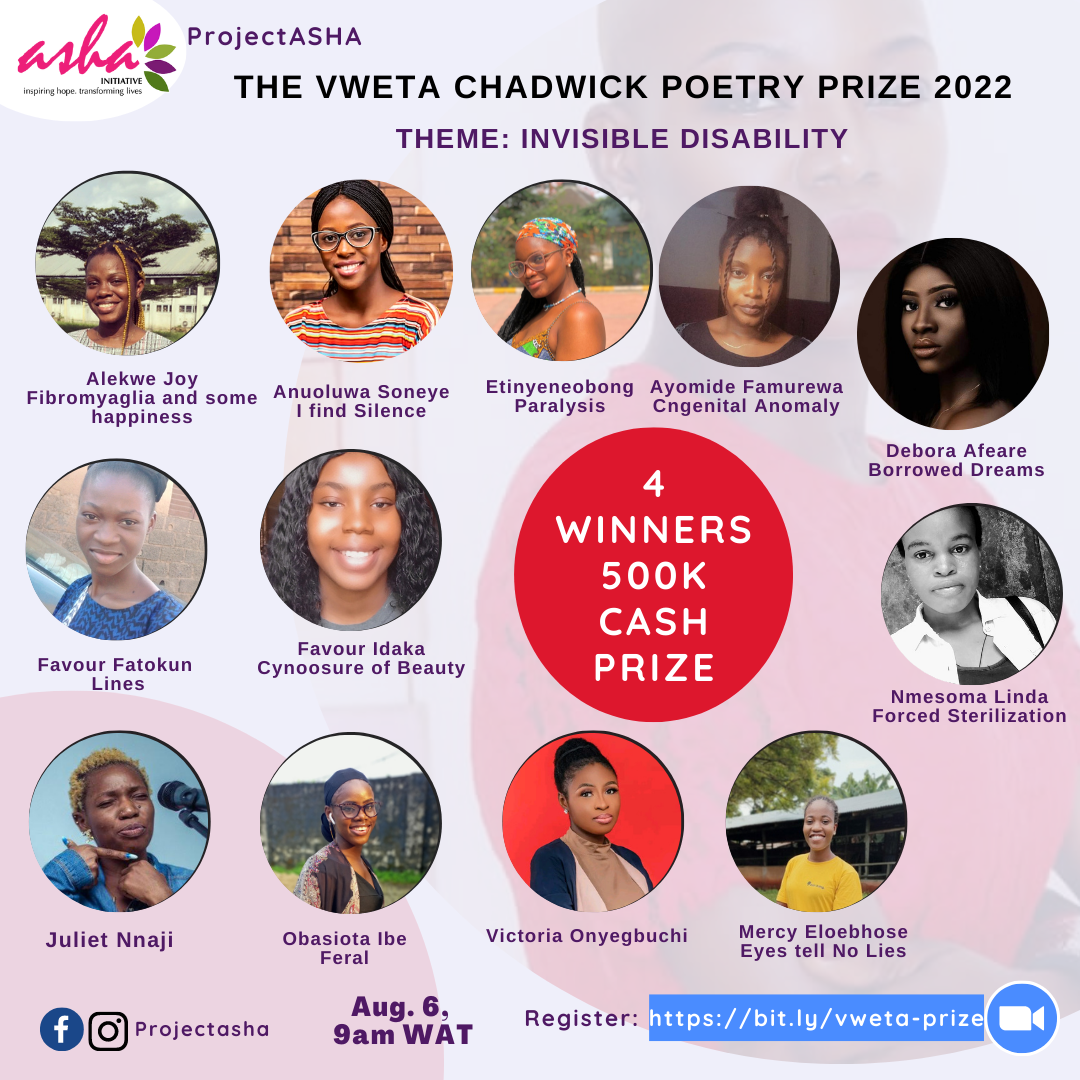 The Vweta Chadwick Poetry Prize(VCPP) is an annual poetry contest organized by ProjectASHA in honor of its founder and hitherto Global Programs Director, Vweta Chadwick (1988-2020).

Vweta was a women and girls’ rights champion. She founded ProjectASHA as an NGO and vehicle for advancing the rights of women and girls in underserved communities. Through her work, Vweta believed and demonstrated that empowering women and girls is key to bringing positive change and sustainable development in local communities and around the world.

Chadwick held the strong view that one way to empower women and girls is to give them a voice. She believed in the power of the internet in amplifying and crystallizing women and girls’ challenges, disabilities, struggles, and marginalization. Throughout her short life, Vweta used technology to connect the relegated communities with the world. For this reason, the annual poetry contest in honor of Vweta Chadwick is a continuation of her legacy.

This year’s contest and the inaugural edition are tagged “Invisible Disability”. This year’s contest is virtual and would be streamed live on Zoom and social media channels. This year’s theme has been carefully chosen to reflect the subjects championed by Vweta for example gender equality, women and girls empowerment, civil and human rights for policy change, violence against women and girls, promotion of black women’s rights, and the human rights of people who like her suffered an acquired disability due to negligent medical treatment in Nigeria.

Vweta Chadwick and ProjectASHA have received numerous National and Global awards and recognition for their work stated above but also specifically working to give voice to struggling women and girls and campaign for disability rights. Vweta addressed different audiences, gave a TED talk, US State of Delaware House of Senate and Representatives, University of Cambridge, and also wrote a lot of poems and essays on topics ranging from social justice, equality, diversity, inclusivity, gender equality, Patriarchy, honor-based violence and abuse, technology for empowerment, obstetrics fistula, female genital mutilation, and anti-discrimination. Her last days were spent as a social worker in the UK supporting children in care and hosting a support group for women survivors of domestic abuse in Wales.

Participation in this year’s contest has been phenomenal. Entries were received from talented girls and young women from all regions of Nigeria and abroad. The entries stirred conversations, raised awareness, and spotlighted the diverse forms of injustice faced by people with an invisible disability and some focused on mild to high intersectionalities of disabilities many girls and women experience globally. In what has proved to be a very competitive field, our eminent panel of judges has whittled down the entries to 12 shortlisted finalists who will now present their poems in the live final round.

It will be hosted and streamed live on Zoom as well as other popular social media channels. The prize for the winning entry is $500 USD (#500,000 NGN). Register here.

Details of our distinguished panel of judges can be found here

Details of the judging criteria can be found here

Please join us in what will be a truly remarkable poetry SLAM exposing and espousing in stark honesty and brutal reality the issues faced by millions of people living with invisible disabilities in Nigeria and worldwide.