Yeah, u heard right….John Legend is currently dating a Nigerian Model named Tayo Otiti. Tayo is a model with top modelling agency, Wilhelmina. John and Tayo are apparently really serious, on her birthday, serenaded her by singing “Happy Birthday” over dinner at Garden of Ono and did it again at Marquee. Apparently, all that birthday crooning was enough to land the gist on the pages of New York Post’s highly influential Page Six: See story HERE and HERE. Here is a pic of John and Tayo. 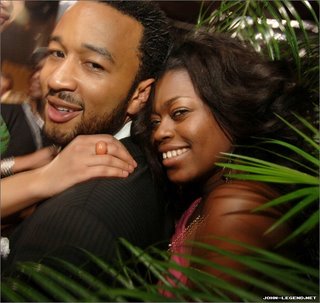 All I have to say is “I hate her”…lol…naaa I don’t. Good luck to them oooo….I hope this lasts longer than John’s previous model relationship with SI Supermodel, Jessica White who appeared in his “So High” video.

BTW did you know that:
John graduated from the Ivy League University of Pennsylvania when he was just 20?
John majored in English, with an emphasis on African American literature and culture
John then worked with one of the world’s top consulting firms, The Boston Consulting Group before leaving to work with a non-profit then ultimately music…..

Tayo is a lucky girl….
What do u guys think?
Do you hate Tayo too? lol

I LUV NIGERIAN MUSIC – Styl Plus