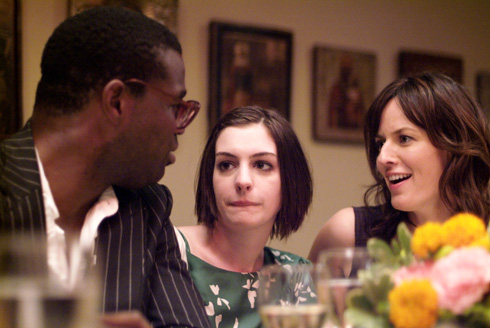 I’ve always considered myself a mainstream girl…my music tastes have never ventured past the Top 40s. I never really had that illuminating music discovery phase in high school where you find some strange unconventional music that changed your life, well until I listened to TV on the Radio‘s Dear Science album on imeem. I first heard about the Brooklyn based indie-rock band,  TV on the Radio when they played on the “The Colbert Report”, Comedy Central’s satirical news program. I was amazed to learn that the lead singer was a Nigerian, Tunde Adebimpe.  And then a few weeks ago, I watched “Rachel Getting Married”, the critically acclaimed indie movie which featured Tunde as Rachel (Anne Hathaway’s sister)’s groom in the film. Tunde was so raw in the movie. It is definitely refreshing to see Africans in the U.S media playing un- cliched roles.

So how did Tunde the son of a psychiatrist and pharmacist get involved in music? In an interview with the Wall Street Journal, Adebimpe says, “I never wanted to be [a musician] at all, but I always played in bands. Right after I was at NYU, I was in a noise band called Strugglepuss. Right before shows we would meet up and record two hours worth of absolute noise and screaming and keyboards being badly banged on. At the show we would play until everybody left and whoever was left at the end would get a free CD.”

Adebimpe studied film at the renowed NYU’s Tisch Scool of the Arts. He worked as an animator for MTV and animated the Yeah Yeah Yeah video for the group, Pin. What I really love about TV on the Radio is how their lyrics are so metaphorical and reads like poetry.

Here’s the chorus from my favorite song on their new album, Dear Science:

Definitely listen to TV on the Radio below, Tunde and his band are just too cool!

Dancing Choose by TV on the Radio

In Photos – The Wedding of Nafisa Yar’adua & Isa Yuguda