He suddenly buys silk boxers, does his own laundry and says HE'S got a headache. Watch out - your man's a cheating snake!

Culled from the Daily Mail

Statistics show that three out of four men in marriages or long-term relationships are likely to have an affair.

And, what’s worse, two-thirds of their wives and girlfriends will have no idea. In her latest book, TESS STIMSON, both a former scarlet woman and wronged wife, offers the ultimate insider’s guide to catching out an adulterer…

It goes without saying that a man having an affair – or even thinking about it – wants to make himself more attractive for the other woman. For years, while you’ve been working your backside off (literally) at the gym, Botoxing your wrinkles and massaging your cellulite, he’s been happily cultivating love-handles and a bald patch. 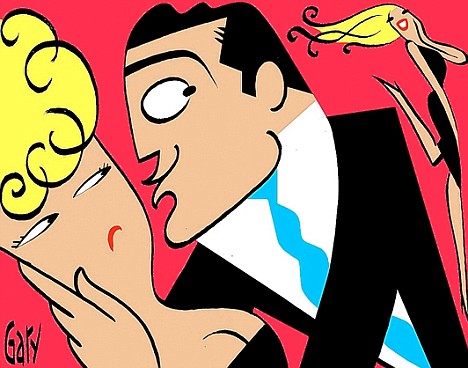 For you, he’ll pick his feet, belch, inspect the contents of his nose and drink beers in front of the TV. But for his new ‘amour’, he’ll stop at nothing to get in shape.

He’ll spruce up his clothes and ditch the ‘fun’ socks the kids buy him every Christmas.

He’ll get all gussied up for his regular sessions down the pub ‘with the guys’, or to nip out for that oh-so-crucial part for the lawnmower.

If your hygiene-averse, turn-them-inside-out-and-they’ll-do-two-days Y-fronts slob is suddenly splashing out on silk boxers and changing them twice a day, trust me: he’s having an affair.

If he’s hiding a mistress he may even start to put on the odd load of laundry now and then ‘to help you out’; don’t faint with delight, he’s just trying to get rid of lipstick stains and the smell of her perfume.

He’ll stop dumping his clothes over the back of the chair – yes, you’re getting it: he’s not being helpful, he just doesn’t want you going through his pockets. (Make sure you do it anyway, of course.)

He might start to use hair restorer on his bald patch, or colour his grey hair. He’ll shower far more than he ever used to: and believe me, he’s not washing off the ‘city grime’, he’s washing off her.

And then of course there’s his body. When a man who thinks changing channels with the TV remote is a workout suddenly joins a gym, a woman is at the bottom of it. Or he could start jogging or playing tennis, both to get fit and as an excuse to go out and meet the other woman.

Ah, the telephone. One of the great unsung sex aids, right up there with Cadbury’s Flakes and Tiffany jewellery. It’s simple: if he’s having an affair, he’s phoning her. And texting her. And emailing her. Even if he’s sitting right next to her in the office.

It’s what lovers do, even if they vow to be ‘careful’. He might tell her not to call him at home, but she will. Check your caller ID or dial 1471. Teenage morons don’t go to the trouble of hiding their number every time. Mistresses do.

Keep an eye on your home phone bill for any unknown numbers. Remember, if he starts to keep his mobile phone glued to his hip, wonder why. If you do check his mobile, and you’d be a fool not to, be very, very suspicious if he’s deleted his call history. Why would an innocent man bother?

A man in the throes of an affair will be generally weird around the phone. Jumping on it the second it rings. Taking calls through into another room (business? At three
o’clock on a Sunday?).

He may put his mobile on vibrate, so you don’t know when he’s getting calls and texts. And it always seems to be on; except when you’re trying to reach him, of course.
He’s not in a bad area. There is reception. His battery isn’t dead. Trust me.

It isn’t always easy to pick up the changes in the marital bedroom, because the cobwebs may have been gathering for quite a while – hence the arrival of the mistress.

So, think hard. How frequently have you got friendly between the sheets over the past year? Now: how often are you snuggling up these days?

It’s not the frequency of sex that matters, but whether there’s been a significant change.

Has he stopped grabbing you when you get out of the shower? Does he fall into bed late so you’re already asleep when he finally crawls under the covers? Does he plagiarise your pet excuses to avoid sex (I have a headache, I’m tired)?

Sometimes cheating husbands want sex more often than usual, because it’s on their minds all the time – it’s the thought of HER in that sexy lace thong he just bought her that does it.

Affairs cost money. He’ll have to take her out, buy her gifts, stay at hotels. Later, he’ll want to feather his love-nest and salt money away for a divorce he thinks you know nothing about.

Is all that oft-referenced ‘overtime’ at work evidenced in his salary? Does he work 24/7, yet you’re still broke?

He may think he’s being clever, but the great thing about money is that unless you’re a professional money launderer, its movements leave a trail a mile wide. The first thing you’ll notice is that things may seem a bit tight financially.

Are there frequent unexplained cash withdrawals from your joint account? These could be anything from secret credit cards to the rent on a love nest in town.

If he’s really dumb, he might actually charge the flowers and romantic dinners to his usual credit card, thinking that if you spot it he can explain it away as a present for
his mother or a normal business expense.

Once again, when casting your eyes over the credit-card bill, the key word is change.

Overtime. Meetings. Business trips. Conferences. Courses. Paintball bonding sessions. When it comes to the workplace there’s no end of excuses.

Call me cynical, but if your nine-to-five clock watcher is suddenly crawling in the door just in time to catch the end credits of the Ten O’Clock News, be warned.

A sudden increase in business trips, without a promotion or change in job, is a classic giveaway. It’s pretty much the only regular excuse he can use to spend a full night away from you.

If he doesn’t want you to ‘trouble yourself’ dropping him off at the airport, he might be flying somewhere else, or not even getting on a plane at all. He will suddenly be willing to unpack his own suitcase.

He may generously encourage you to go off on trips with the girls – a spa weekend, a ski holiday – partly to get you out of the way, and partly because he’ll feel less guilty if he can tell himself (and her) that you ‘practically lead separate lives’.

Wireless connectivity. Bluetooth. Laptops, BlackBerries, tweeting, iPhones …so many ways for lovers to communicate; so many ways for dumb bastard husbands to get caught.

As with his mobile, he won’t be able to resist hooking up with HER online. He may confine much of it to his office hours but you can bet your Pentium chip his little fingers will be busy texting or typing at home whenever your back is turned.

Late-night sessions in front of the computer screen, early morning dashes to check his emails, closing his laptop the minute you walk in the room . . . do I really have to spell it out?

Does he delete files and histories to cover his online tracks? Set up a separate email account ‘because he’s fed-up with all the spam’? Change his password on a weekly basis?

If he’s cheating, there will be incriminating emails. Human nature is the same the world over. Lovers invariably feel the need to bombard each other with the most sentimental, embarrassing drivel.

He may delete them, but it won’t take much to exhume them; if you don’t know how to minister the virtual kiss of life, just talk to one of those pimply boys that work in your local computer superstore.

The car is another good place to look for clues of an affair. Are there strange smells, such as perfume, or cigarettes when he doesn’t smoke? Strands of hair that don’t match yours, or the dog’s?

Has he started to keep a picnic blanket in the boot, ‘in case the car breaks down’? A change of clothes ‘for the gym’? Are there breathmints in the loose-change tray?

Don’t even get me started on the lacy black bra hidden beneath the front seat. If you find one (a) he’s having an affair; and (b) she planted it there. You don’t lose your bra or knickers by mistake.

This comes under the same heading as phone calls from his mistress telling you she’s sleeping with your husband. Don’t give her the upper hand. Keep your cool, and stay in – as it were – the driving seat.

Less obvious indicators are those that simply signal he has a regular passenger in the car who isn’t you. If you have to adjust the position of your seat or the air vents more than once, you have good reason to be suspicious.

If he starts sporting things he’d never buy himself – funky ties, cufflinks, a watch – then someone bought them for him. Likewise trinkets that pop up around the house: executive toys, a shell photo-frame, silly knick-knacks (mementoes of their secret trysts, no doubt).

Beware if your usually conscientious but uninspired husband suddenly starts giving you really rubbish gifts like a fax machine or toilet brush (yes, real-life examples) or splashes out on a £6,000 Cartier love bangle. It’s just the guilt talking.

If he suddenly starts remembering Valentine’s Day when he always forgot it, she’s reminding him. If the calibre of your Christmas gifts suddenly goes up, he’ll be getting his good taste from someone.

He may stop buying you presents altogether, because he can’t afford it and doesn’t really care; or he may shove a cheque in your hand and tell you to ‘buy yourself something pretty’.

My ex-husband did that once. I bought diamonds. Big ones. Strangely, he didn’t do it again.