Bolanle Okhiria won Koko Mansion and all her fans celebrated – but what does that mean for this young student. See Bolanle’s exclusive interview with Hi Magazine below. In other Koko Mansion news, the kokolettes will visiting the UK soon. This will give them a chance to connect with their international fans. According to news reports, even since the conclusion of the show, Kokolette Rita has been offered a slew of gifts including an international educational sponsorship offer from a Koko Mansion fan based in the UK. We hope it all works out for the ladies! 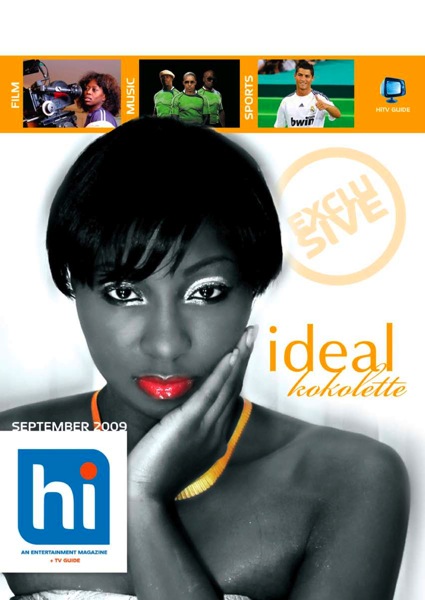 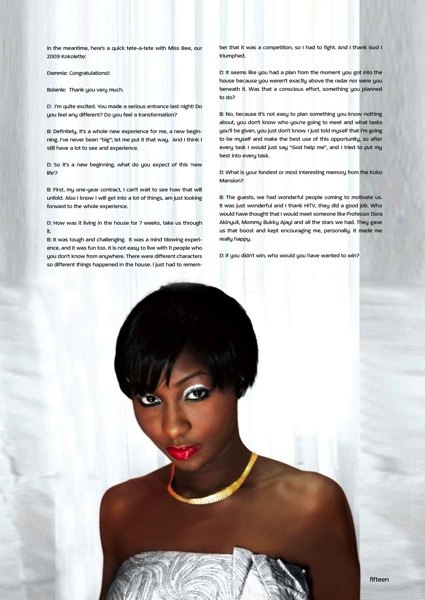 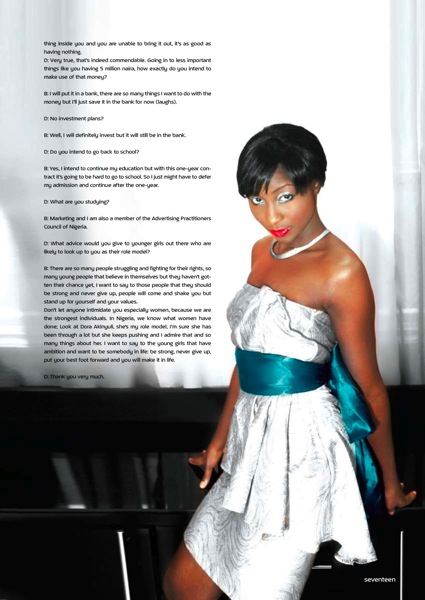 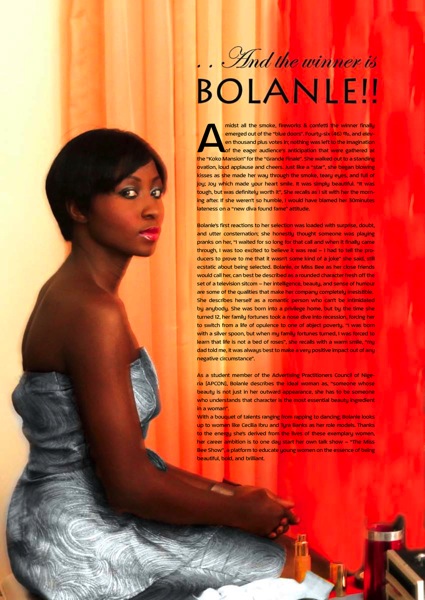 Read Bolanle’s Interview
Amidst all the smoke, fireworks & confetti the winner finally emerged out of the “blue doors” Fourty-six (46)%, and Eleven thousand plus votes in; nothing was left to the imagination of the eager audience anticipation that were gathered at the “Koko Mansion” for the “Grande Finale”. She walked out to a standing ovation, loud applause and cheers. Just like a “star” she began blowing kisses as she made her way through the smoke, teary eyes, and full of joy. Joy, which made your heart smile. It was simply beautiful. “It was though, but was definitely worth it” She recalls as I sit with her the morning after. If she weren’t so humble I would have blamed her 30minutues lateness on a “new diva found fame” attitude.

Bolanle’s first reactions to her selection was loaded with surprise, doubt, and utter consternation; she honestly thought someone was playing pranks on her, “I waited for so long for that call, and when it finally came through I was too excited to believe it was real – I had to tell the producers to prove to me that it wasn’t some kind of a joke” she said, still ecstatic about being selected. Bolanle, or Miss Bee as her close friends would call her, can best be described as a rounded character fresh off the set of a television sitcom – her intelligence, beauty, and sense of humour are some of the qualities that make her company completely irresistible. She describes herself as a romantic person who can’t be intimidated by anybody. She was born into privilege, but by the time she turned 12, her family fortunes took a nose dive into recession, forcing her to switch from a life of opulence to one of abject poverty. “I was born with a silver spoon, but when my family fortunes turned, I was forced to learn that life is not a bed of roses”, she recalls with a warm smile, “my dad told me, it was always best to make a very positive impact out of any negative circumstance”.

As a student member of the Advertising Practitioners Council of Nigeria [APCON], Bolanle describes the ideal woman as, “someone whose beauty is not just in her outward appearance, she has to be someone who understands that character is the most essential beauty ingredient in a woman”.

With a bouquet of talents ranging from rapping to dancing; Bolanle looks up to women like Cecilia Ibru and Tyra Banks as her role models. Thanks to the energy she’s derived from the lives of these exemplary women, her career ambition is to one day start her own talk show – The Bee Show, a platform to educate young women on the essence of being beautiful, bold, and brilliant. In the meantime, here’s a quick tete-a-tete with “Miss Bee, Kokolette 2009.

Bolanle: Thank you very much

D: I’m quite excited. You made a serious entrance last night! Do you feel any different? Do you feel a 180 transformation?

B: Definitely, It’s a whole new experience for me, a new beginning. I’ve never been “big”; let me put it that way. And I think I still have a lot to see and experience.

D: So it’s a new beginning, what do you expect of this ‘new life?’

B: First, my one-year contract, I can’t wait to see how that will unfold. Also I know I will get into a lot of things, am just looking forward to the whole experience.

D: How was it living in the house for 7 weeks, take us through it.

B: It was tough, it was challenging, it was a mind blowing experience, and it was fun too. It is not easy to live with 11 people who you don’t know from anywhere. They were different characters so different things happened in the house. I just had to remember it was a competition so I had to fight. And I thank God I triumphed.

D: it seems like you had a plan from the moment you got into the house because you weren’t exactly above the radar nor were you beneath it. Was that a conscious effort, something you planned to do?

B: No, because it’s not easy to plan something you know nothing about, you don’t know who you’re going to meet what tasks you’ll be given, you just don’t know. I just told myself I’m going to be myself and make the best use of this opportunity so after every task I would just say God help me. But I tried to put my best into every task.

D: what is your fondest or most interesting memory from Koko Mansion?

B: The guests: we had wonderful people coming to motivate us. It was jus wonderful I thank HiTV, they tried. I mean who would have thought I would meet someone like Professor Dora Akinyuli, someone like mommy Buki Ajayi and all the stars we had. They gave us that boost and kept encouraging me, personally. It made me really happy.

D: if you didn’t win, who would u have wanted to win?

B: That is a very big question, well I think Rita because I would want her to use the money to go to school and develop herself.

D: Who was your least favourite in the house?

B: Actually, it kept changing but up till the last moment, I wanted Chidinma out of the house. It’s a game but there was something about her I wasn’t comfortable with

D: During the first double eviction, I vividly remember you saying you knew one was coming up. How did you figure that out?

B: Naturally, I am a very calculating person before i say anything i think and as much as we were looking forward to winning in, we knew that only one of us could win. So i thought, the show is supposed to end by the 23rd let me do my own calculation and I figured that one person left last week, two people should be leaving next week.

D: So now that you are the overall winner, have u been able to talk to the girls and see how they feel?

B: Yes, I have been able to speak with them and fortunately, they seem really happy for me. I found out that a lot of them wanted me to win because I think they believe in me being “the voice” of the Kokolettes. I feel really happy that they are supportive.

D: Now that you have a voice, what changes do you think you can make for Nigeria?

B: The first aspect is that in Nigeria, a lot of women are raped and they don t have the ability to come out. We need to talk to them, also, prostitution because a lot of girls are going into it maybe as a result of their backgrounds. Basically, I’ll try to teach girls how to portray themselves positively and I will try to represent D’banj & HiTV positively as well. I can see that koko mansion is not a small thing and we can also bring positivity and stand up for our values everywhere we go.

D: I know you rap and you also want to do a talk show, how do you intend to go about all of that now that you actually have this platform?

B: Well firstly the rap, I’m going to make good use of my one year contract with Mo Hits records, push the rap and hopefully the world should be expecting something and with the presenting, I’ll keep working on it, I’m with HiTV and I’m sure they will help me develop myself and hopefully much, much later, my talk show can be a success.

D: What is your talk show supposed to be about?

B: It going to be empowering women, bringing out the positive values and impacting the lives of women.

D: What do you want to put into the limelight, how would you like to be portrayed?

B: Enlightening/Enlighten women and encourage them to stand up for their rights. Every day, we are adapting to globalisation and westernisation, so why can’t we stand up for ourselves? We need to realise that it is not about looks but what you have inside. It’s important to be firm in your decision-making because it goes a long way in portraying the kind of person you are. If you have something inside you and you are unable to bring it out, it’s as good as having nothing.

D: Very true, that’s indeed commendable. Onto less important thing like you having 5 million naira, how exactly do you intend to make use of that money?

B: I will put it in a bank, there are so many things I want to do with the money but I’ll jus say it will be in the bank (laughs).

B: Well, I will definitely invest but it will still be in the bank.

D: Do you intend to go back to school?

B: Yes, I intend to continue my education but with this one-year contract it’s going to be hard to go to school. So I just might have to defer my admission and continue after the one-year.

D: What are you studying?

B: Marketing and I am also a member of the Advertising Practitioners Council of Nigeria.

D: What advice would you give to younger girls out there who are likely to look up to you as their role model?

B: There are so many people struggling and fighting for their rights, so many young people that believe in themselves but they haven’t gotten their chance yet, I want to say to those people that they should be strong and never give up, people will come and shake you but stand up for yourself and your values. Don’t let anyone intimidate you especially women, because we are the strongest individuals. In Nigeria, we know what women have done, Look at Dora Akinyuli, she’s my role model, I’m sure she has been through a lot but she keeps pushing and I admire that and so many things about her. I want to say to the young girls that have ambition and want to be something in life: be strong, never give up, put your best foot forward and you will make it in life.

Sasha’s back in the building! Teams up with Dama Do Bling to ‘Put It Down’