October is Breast Cancer awareness month and we are going to be working towards raising awareness on the disease. There are various initiatives and events planned around the country this month and we will ensure that you receive the information that might help save a life!
The Pink Pearl Foundation is going from state to state to raise awareness on breast and cervical cancer. Their Lagos rally was held yesterday.
Photos are below plus you can read all about the foundation and their work as well.
It is great that they are targeting women in the rural areas (this has been done in Delta State); a particularly vulnerable group due to lack of diagnostic and treatment facilities. 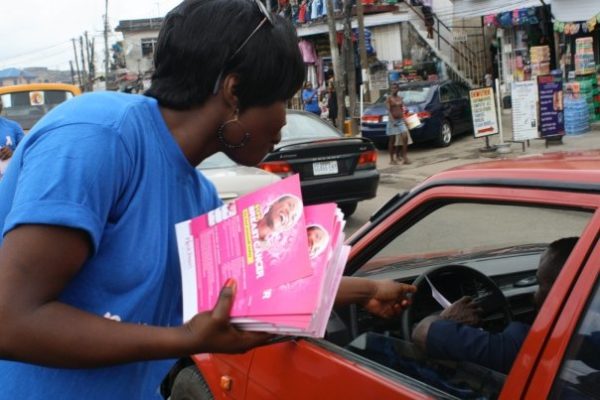 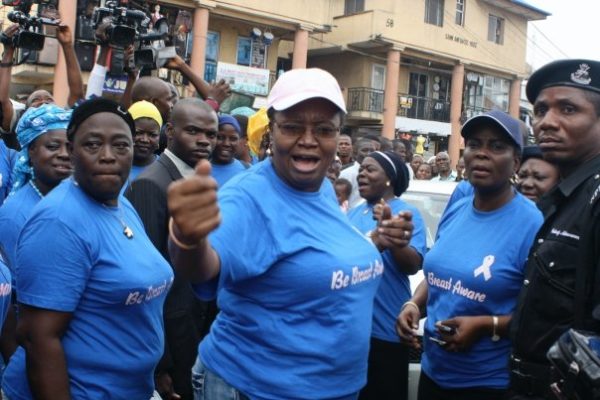 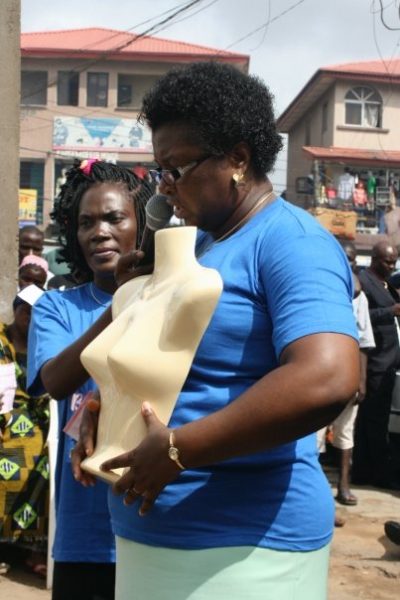 Awareness Campaigns: The first was held in Warri, Delta State on the 8th of January 2008 with over 1000 women and 100 men in attendance, free checkups where done and over 50 women benefited from it. A second campaign was done on the 21st of April 2009, at the Nelrose hotel Asaba, Delta state with over 1000 women in attendance, again free checkups where done but this time for as many women who were willing, over 100 women benefited from this. These campaigns had Doctors who spoke to the people about detection and prevention, we also lightened up the mood with some comedy and drama presentation both in the Pidgin English so everyone could understand.

Free treatment: Most cases of breast cancer in Nigeria are detected late and thus leading to causalities that could have been avoided. To eliminate this we fund the treatment of women who cannot afford to pay for their operation to remove the cancer lump and do free- checkup for women.

Success story: Pink pearl has been able to provide a Lillium Mammogram machine to the Central hospital in Sapele Delta state on the 24th of December 2008. The Machine was accompanied by a Quency Generator, Dual Focus focal spot 0.1 and 0.3mm and an interactive digital control panel with graphic display.

Ambassadors: Pink pearl has people who have stood by her from the beginning and others who came on board later but have been of so much help to the Foundation. RMD, AY, Eric Arubayi, Omawumi, Caleb Egwuenu, Basorge TJr, Olumide Adewumi, Onye Ubanatu, Amaju Pinnick.

A True story as told by the founder of the Pink Pearl Foundation – Orode Jade Uduaghan
On the day of our second campaign in Asaba, a woman walked up to me after the program with her husband, they both had tears in their eyes but I couldn’t understand why. She came to me with our Pink Pearl Foundation lead Doctor and began her story. She started feeling a lump in her breast a while ago but had no idea what it was. As usual she went to the village to seek help, she was given every concussion possible, in fact she was told she would be healed after a few attempts with traditional herbs. Strangely it continued to get worse, she decided to look for help somewhere else and went to the hospital, by this time her condition was too large to handle so she was turned down, with the claim that there was nothing they could do about her. She finally went to the UBTH hospital in Benin where she was told she had cancer. This woman saw her whole world flash before her as she had no clue where to start from. Gradually her cancer spread from her breast to other parts of her body. As I spoke to her I couldn’t look at her because her fingers were already eaten by caner, she had sores all over her hand. The worst was yet to come, she pulled her blouse up and showed me her breast, I really could not pretend I was comfortable, I turned my face away. Her breast was almost gone, everything had sores in fact it was not the best sight. I spoke to the Doctor about what can be done for her, and he told me that frankly she was already gone and that the best we can do is cut of her beast to reduce the pain. I couldn’t tell her this was it so I handed her over to the Doctor and told her it is well. After 1 week, she did the necessary surgery and came out fine. But this wasn’t the end of it. The Doctor spoke to me and told me that this woman does not only have breast cancer but has 6 different types of cancers in her, not 1 not 2 but 6. I froze for a moment and reflected on what he just said. I went into her room and spoke to her, she looked happy although with tears in her eyes, you could tell she was happy. She requested for one more favor, that her hand should be cut off, because the pain she felt was unbearable. Again I spoke to the Doctor and he said honestly there was no point because she had really a short while to live, been African and Optimistic I told him to continue with it. They did the operation and again it went fine. Everyone was happy, she felt no more pain and felt like there was something worth living for again.

I went back to Canada to finish my last semester at the university and got the shocking news that my patient was gone. Words cannot describe how I felt and the pain that ran through my veins when my mum told me this news. Although she was gone, she left this world a happier woman. It all balls down to one thing, early detection and awareness. The knowledge is key and it is the most important thing we can have, if she knew what it was from the start, she might have been saved, and also if she had enough funds to help herself, she might just have survived. Pink pearl is going to take a very radical approach towards Breast cancer awareness and by God’s grace by 2013; we hope to have reached all major towns in Nigeria with our aggressive campaigns and concerts.

There is no better time to join us in the fight against breast cancer and protect our mothers, sisters, aunts, friends, grandmothers, daughters, and leaders of tomorrow.

To support the Pink Pearl Foundation or find out more about their activities, visit their Facebook Fanpage

Related Topics:Pink Pearl Foundation
Up Next