The buzz surrounding Mahmood Ali-Balogun‘s new movie “Tango With Me” has been intense for the last few months. The movie received 5 nominations for the 2011 African Movie Academy Awards and movie fans have been eagerly awaiting the cinematic release of the film. On Sunday 17th of April 2011, “Tango With Me” celebrated its world premiere at the Silverbird Galleria in Lagos, Nigeria.

Based on feedback from guests at the premiere, this movie is definitely one to watch! It is a modern story told through a great script brought to life with solid performances. “Tango With Me” is opening in cinemas across the country during the Easter Weekend.

“Tango With Me” Synopsis

In the beginning…
Lola and Uzo are the perfect couple, their newly married life in front of them. All is well until the happiest day of their lives became the worst.
This event leads the couple on a journey of self discovery.
“Tango With Me” is a contemporary story about forgiveness about some of our core values as a people and our faith.
A story that proves that above all, Love does indeed, conquer all.

“Tango With Me” stars Genevieve Nnaji, Joseph Benjamin, Joke Silva, Kate Henshaw-Nuttall, Bimbo Akintola and author, Ahmed Yerima. The movie was directed by Mahmood Ali-Balogun.
You can listen to music from the Original Soundtrack for “Tango With Me” via www.reverbnation.com/ebisan 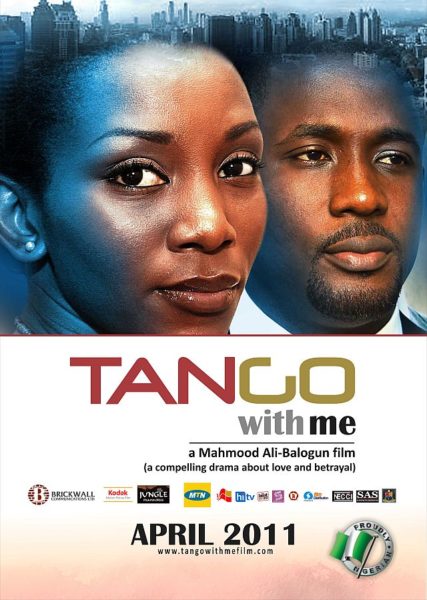 Tango With Me – Trailer

Tango With Me – Teaser Trailer

Tango With Me – Original Soundtrack – Ebisan