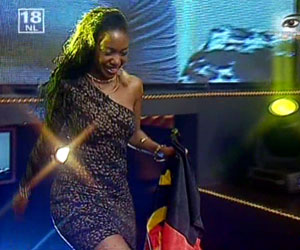 It was a definitely a night to remember when Big Brother Amplified turned up the volume this past weekend with the biggest announcement in the show’s history!

To huge applause from the studio audience, and in news that is sure to cause great excitement, series presenter IK revealed during the live eviction show, that this season there will be not one, but TWO winners – and each will take home a whopping USD200 000 cash prize. With the series almost at the halfway point, the surprise announcement is the latest twist in the highly popular reality series which is set to end with a spectacular two hour finale on July 31. It’s the first time ever that Big Brother Africa series will award two winners, bringing the total prize money to an incredible USD 400 000 though the housemates themselves will only find out about the double prize during the final show!

With Malawian stars Tigris and Maskal lifting the roof off of the Big Brother Amplified studio with amazing musical performances, the night also saw two housemates leave the Heads house…

With 7 Housemates nominated for eviction, there was a lot of tension in the Heads House this week. When IK asked Head of House Lomwe to reveal and explain his ‘save and replace’ decision to the Housemates, he told them it was “nothing personal”. “The person I decided to save represents the same cause as I do, that’s obviously Felicia,” he said. “The person I decided to replace her with – again nothing personal – has a strong background and foundations. If they leave the House, they will have a bright future. At the same time, that person is strong and I believe they won’t be evicted – sorry, Vimbai,” he revealed.

IK then took viewers into the House and told the Housemates that when he called out their names, they should stand. He named Millicent, Weza and Zeus. After a dramatic pause, he told Millicent and Zeus that they had been saved, calling Weza to the stage. Once she emerged, he asked her about her favourite memory in the House. As she started to answer, Big Brother delivered a message to IK – that Weza was to leave the stage immediately. The bewildered Angolan made her way off stage and before long, found herself entering the Tails House and being mobbed by a new set of excited Housemates.

It wasn’t over for the Heads Housemates – IK took viewers back into the House and asked Vina and Confidence to stand. “Vina, you’re safe,” said IK.

“Yay!” exclaimed Confidence. “I’m walking out! I’m free – I’m free of you people!” said the Ghanaian. Unfortunately for Confidence, she will miss out the cash prizes as she was evicted after gaining the fewest votes from Africa during the week.

As Confidence joined IK on stage, he confirmed that she had been evicted. “What was your favourite moment?” he asked her. “Well every moment was my favourite, I’m so grateful I’ve been brought to this place and taught the lessons of life and I’m going to go home a changed person,” she said.

When IK asked about her least favourite person in the house, Confidence said “Put it this way – they’re behind me. I’m moving forward!” IK quizzed her about what she’d be taking away from the experience. “Big Brother!” she said jokingly, before saying: “I have so much in my life and feel I’m so blessed to be here, of all the Ghanaians, I’m the girl who’s been picked to be here. I feel honoured and privileged and for me this is fun. Come on Africa – thank you so much!” Her parting shot came when IK asked her for a quick prediction on who would win Big Brother Amplified. “None of those people in that House [Heads]. There are nicer people in the other house. Those people are pretenders, please!”

As Confidence left the stage to head back home, IK still had time to scare Hanni and Vimbai when he crossed back into the House – but revealed that they had been saved.

Earlier in the show, viewers got a chance to see how Ernest and Bhoke had been coping after their eviction last week. Ernest explained his ‘intelligent attack’ on Luclay and talked about Bhoke’s ‘beautiful energy’. He looked forward to visiting Botswana to meet up with Zeus and Miss P and also hanging out at Confidence’s club in Ghana. He said he felt he had represented his country and its diversity well.

Bhoke said that being part of Big Brother Amplified was an “awesome experience” that she would carry with her for the rest of her life. She saw Confidence as a big sister in the other House, and had bonded with Kim in the Tails House as they both recognized something of themselves, in each other. She revealed that her high point was the first task win – having previously lost two tasks. Speaking about tension in the House, she felt that there had been many disagreements because nobody wanted to be seen as a weak person. “It’s been a learning experience,” she said. “I learned a lot about myself and I’m strong and confident in my own skin”.

The Tails Housemates got stuck into nominations on Monday (13 June) on M-Net’s Big Brother Amplified – and 5 of them face eviction this Sunday.
Danny, Kim, Nic, Luclay or Karen could be heading home after a day of nominations, where politics and bad behaviour influenced decisions.
Once all the Housemates had had their say, Head of House Alex was one of those who faced eviction.
He promptly saved himself and put Karen up for eviction in his place – the first time so far on Big Brother Amplified that a Head of House has had to save themselves.

· Karen seems to have hatched a plot with the other ladies to attempt to ensure that Big Brother Amplified has a female winner – and looking at the way nominations went, they’re behind her! All the ladies nominated men on Monday, with Kim even nominating love interest Nic after Karen planted the seeds of doubt about the true nature of his feelings for her. Kim’s second nomination went to Danny.

· Mumba and Miss P both nominated Luclay and Danny – in fact, Luclay picked up a host of nominations from the Tails Housemates, with everyone except Karen, Kim and Danny nominating him. The overwhelming feeling is that his constant involvement in confrontations means he has to go.

· Danny nominated Karen and Kim, with Karen opting for Danny and Nic. Nic nominated Alex and Luclay – because the latter was creating ‘unnecessary tension’ in the House. Bernadina’s reason for nominating Luclay was that he had threatened to ‘expose’ other Housemates and send them home.

· Danny received a host of nominations, with the Housemates mentioning his laziness and lack of interest in chores. Alex, as Head of House, also picked up enough nominations to see him have to exercise his save & replace to keep himself out of harm’s way.

The winner of Big Brother Amplified, which is headline sponsored by Coca-Cola, will be named on 31 July, after 91 days of head-to-head competition – and the power to award to USD 200 000 prize rests in the hands of the viewers.

BN Bytes: Darey’s UK Invasion – Spotted with Tinie Tempah at the Keep A Child Alive Ball & Snapped by the Paparazzi at Selfridges