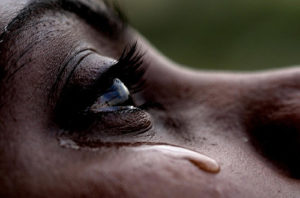 Author’s Note: This is for all the babies that die before they can cry their first tear.

You’re afraid to close your eyes in the fear that you might dream – The same familiar one. The one that makes you so terrified of sleeping. You worry that as your eyes drift closed this time, you will never wake up and your worst fears will be realized. In your vigilance, the tendrils of sleep – Death’s cousin – creep up on you. Slowly but surely, its cold fingers pull you in the direction of lands familiar — of dreams unforgettable.

She jolted out of her dreams with a scream and even before she was fully awake, she knew. The cold sweat on her brow and the goose-bumps on her forearms were enough of an indication. Before she felt the blood start to seep from between her thighs, she stood up and headed towards the bathroom, the blood exiting her nether region leaving dot like trails behind her.

Nneka sat on her haunches curled up as the shower cascaded down on her. She still had her blue baby-doll night gown on, as she let the water pour on her. It clung to the curves and the fullness of her body in a way that would have been wanton under different circumstances. She slowly raised her head as if in a silent supplication to God. The pale light of bathroom gave her very light skin a sickly glow. Her hair matted and clung to her face, her eyes were very noticeably red.  Her lips parted but no sound came out, just a strong tremble.

Words are mere words. They only start to take on an existence in us when they, in all their shades of meaning, define where we are at a particular moment. For her, those three words could not quite place a lid on the emotions swirling around within her.

“God, Why?” She  cried in anguish. The pain tore at her on the inside! Why do things have to go so wrong?

We are taught never to question the unexplained. Grief, at its rawest dissolves all convention. Losing 4 babies in just as many years – 3 by miscarriage and 1 by still-birth, was the source of Nneka’s grief.  She had just lost another at 5 months along. She shook her head as if the answer she had gotten was not quite enough to explain how things had come to be this way.

She held her head in her hands as if it would explode any second. It was difficult to tell where the tears stopped and where the water began. The shower stopped, and shortly after, she felt strong arms around her hefting her effortlessly from the ground. Her lone thought as she drifted away on the wind currents of exhaustion was her man – her husband, Ebuka.

Ebuka let himself into their 13th floor apartment at Eko Court. Nneka enjoyed the simple little things – breakfast in bed, picnic lunch by the sea, love notes tucked in her shoes and dinner under the stars. And he did everything he could to see her cherubic face light up in a smile. This time it was fresh flowers.

Usually she watched TV or chatted with friends on her BlackBerry or both till he came back and then she’d watch him eat as they in turn recanted all the details of their respective days.

They were 4 years and a little into the marriage. Heartbreak after heartbreak seemed to rock them, but they were left unshaken. He had no problem with that, at least they had no issues with fertility. But for some reason, Nneka felt like she was under some sort of pressure. Whereas, he was convinced that soon enough, one of the pregnancies would stick – at least the latest one would. He had a good feeling about it. And he would call her Ogechi – because the time would be just right.

The moment he let himself in, he knew there was something amiss. The TV was on, and Nneka was not on the couch. He left his briefcase and the flowers at the door and he padded straight to their bedroom. The first thing he saw was the trail of blood leading to the bathroom, and he sighed very deeply realizing that the worst had happened.

The pressure of lips on her forehead woke her from deep dreamless sleep. As Nneka’s eyes came into focus she smiled, taking a split second to recognize the rich brown eyes boring into hers with such attention and devotion. She made to get up from her reclined position when she realized there was something connected into her arm. An IV? she thought. She looked around the stark unfamiliar room, the smell of antiseptic and the feel of hard sheets confirming she was in the hospital.

She frantically looked around the room again and the memories came pouring over her like waves crashing on the beach.

“My baby! My baby!!” She screamed, “Where’s my baby?!!” Her already tired tear glands swung into action again and she wailed. Her womb that had pulsed with life only 24 hours before, throbbed with emptiness.

“Shhh” Ebuka cooed to her. He drew her into his strong arms and rubbed a palm over her back, as if he was quelling the oceans of sadness wracking her body. She fought against him, pounding her little fists into his chest, but he drew her even in closer.

“Give me my baby…” And she began to wail, inconsolable as her husband drew her even closer still. His chest and arms a seeming bastion of strength on the outside, whereas he was caving in on the inside. The only sign of which, was the glassiness of his eyes. But she could not see this; he could not let her see this so he hugged her even tighter.

“Honey, I understand” He said. You can never understand! She meant to retort but she just sighed. How do you make a man understand? How?

How do you make him see, that having a miscarriage and slowly watching your child die in your arms are of the same ilk. With both, you watch life drain from them and you look on helplessly. How do you make a man understand that a miscarriage was more than just a lost opportunity to be a mother or a father but a child you would never see take his/her first steps or hear their first words.

How? How can a man possibly understand, she thought silently.

Even when he had calmed her down enough, she still shivered. Their doctor, walked into the private room, her usually stoic gaze was a bit shaken. “Mr and Mrs. Uzuakpundu” She began, “I am sincerely sorry for your loss…again”

“As our earlier tests revealed, there is nothing wrong with either of you, you will conceive and have a baby. Please don’t despair.”

They drove home, their car cloaked in a blanket of silence both of them wrapped in their thoughts. Apart from the occasional shudder, her eyes were dry but very red.

“Your mother is gonna take me to MFM for deliverance this time for sure.” She broke the silence.

“What the-? She’s not taking you to any MF-anything” He retorted.

“She must be convinced that I’m a witch and I eat my babies” She said, a very wry smile on her face.

“What the heck are you on about?” Ebuka’s face was scrunched up in disdain as he negotiated their black BMW X6 into Muri Okunola from Ozumba Mbadiwe. “That’s just utter bullshit.” He continued.

Nneka’s phone rang stopping Ebuka’s tirade mid-stream. “Hello? Oh Aunty Chisom? We’re just round the corner, we’ll be with you in a bit.”

“What does she want this time?” Ebuka said through grited teeth.

“She’s your aunt, Ebuka.” She chided him.

“So?! She has no right to just show up from nowhere. What if we weren’t home?”

They were soon in the parking lot, Ebuka’s aunt walked to where they were parked and exchanged the requisite pleasantries with Ebuka looking on.

“Nneka’m, you are taking very good care of my son oh! Ahnahn! See how good he is looking. But you look tired, hope nothing? ” Aunt Chisom chimed as she took Nneka’s hands in hers.

“Ah yes! But please o? Come and help our wife carry the basket of fruits I bought for her upstairs. I left it at the Gate House”

“OK mama” Ebuka almost grumbled. They left Nneka in the car with her thoughts, they were barely gone a few yards when his blackberry chirped.

“Baby? Your phone!” She called out.

She looked over at his blackberry and the new message icon taunted her. She shrugged it off and looked away, she had never had reason to doubt her man, ever. But the red status light seemed to nudge at her curiosity, so she reached over for his phone and navigated to his messages

She read once, blinked twice and then read it again.

Her whole world turned dark, her guttural scream could be heard as far as the top of the apartment building.

Hi Ebuka, I’m 8 weeks gone. I need money to sign up at an ante-natal clinic. Call me. Folake.

‘Jibola Lawal is a budding writer and the Bella Naija Music Editor. You can read his other short stories published on Bella Naija here, and you can follow him on twitter here.

Money Matters: The Root of all Goodness?