The Calabar Carnival Queen Pageant 2011 is Here! Winner to be Crowned on the 23rd of December 2011 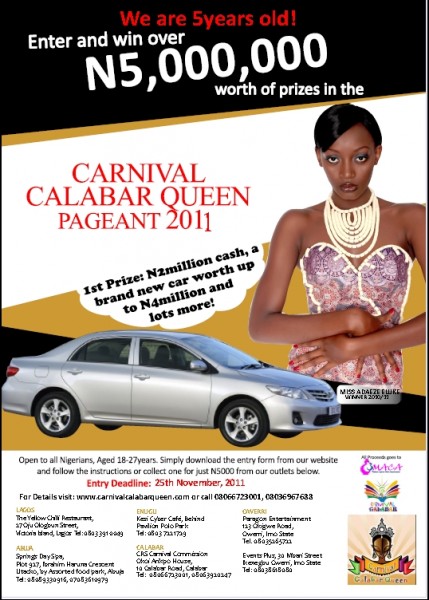 The countdown to the 5th edition of Calabar Carnival Queen Pageant is on!

On Friday 23rd December 2011, the nation’s tropical city – Calabar will watch as a special young lady is chosen as the 2011 Calabar Carnival Queen.

After rigorous screening, 30 lucky girls were chosen as finalists by Her Excellency Obioma Liyel-Imoke (First Lady of Cross River), Enuma Chigbo (Media Consultant to the Cross River State Government), Maurice Inok (Official Presenter for the Calabar Festival), Valerie Cruzat (Special Adviser to Her Excellency on Events) and many others.

This renowned pageant promises to break from the norm and be the best so far with non stop entertainment, fun and thrilling sensational performances by the contestants themselves.

Be sure to attend this event and let’s see together who will go home with the coveted crown, a cash prize of N2 Million, a brand new Saloon Car worth N4 Million, lots of goodies and most of all be Calabar’s Tourism Ambassador but if you don’t reside in Calabar and you will like to see the next queen that will walk in the footsteps of previous winners, you can watch the show live on NTA on Friday 23rd December 2011 by 6 PM.

See you all there!

Related Topics:Carnival Calabar Queen
Up Next