BN Hot Topic: It's the 29th of February! Ladies, Are You Proposing Today? 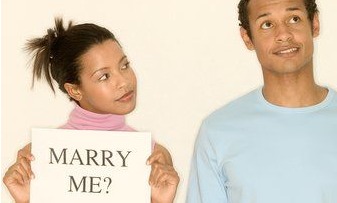 Yay!
Today, na today, you no go escape, I go put you for corner, I’m ready for you!
~ lyrics by eLDee – remixed by Nolita

Not sure if I’ve shared this story on BN before, I remember a few years ago when I was in a serious relationship, an aunt came to visit and was asking the usual questions about when I was going to get married. My response, “When he proposes”.
She laughed and laughed then laughed some more.
My aunt then told me that I had to propose…African woman style.
That after dating a man for a reasonable period of time, if you believe he is the one you want to spend the rest of your life with, simply start planning the wedding! Dress, vendors, venue etc…Let him hear you making plans….
Then, tell him your father is expecting him and his people on a specific date and then take it from there.

I found it hilarious but apparently it works for some women!

According to folklore in various cultures, women can only propose to me during a Leap Year. In other culture, women are restricted to the 29th of February during that year.

Folklore aside, I do know a few women who actually proposed to their spouses in a romantic way! Candlelight, on bended knee, a ring…the whole Shebang!
Apparently, it takes a huge dose of boldness but it has worked for some.

What do you think? Would you propose. If you take the leap, how did things work out?