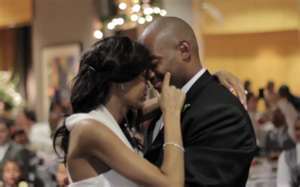 On Christmas day, while many people decked out in their Sunday best, Lekeasha Rutledge Draft had two days to live. Her courageous fight with lung cancer came to an end on December 27th 2011, one month after her wedding to Chris Draft. As I watched clips from their wedding day, I felt sorry for them and at the same time I completely admired them, especially Chris. But of course who wouldn’t be inspired by Chris’ firm commitment to Lekeasha, after all it is much easier to empathize when you are not connected to the situation. For most of us, the thought of marrying someone who is followed closely by an oxygen tank is unfathomable and too much to bear. You are bound to hear things like, “God forbid!!!” in all possible languages.

But when hard times hit home, does your love endure?

I know for sure that in difficult life phases, not every loved one becomes a ‘Chris Draft’.

My ex-fiancé and I had an enviable relationship. Everything was great until both of us hit rough patches in our careers… around the same time. At first, we encouraged each other and sought out possible solutions to our career issues, but one day that changed. He told me that while he still prayed about our work situation, he wondered if it was a curse that we were both going through similar issues, adding that it was probably a sign that we should split up. I cannot recall what my immediate reaction was. But I do recall that from then on, he blew every other issue out of proportion and every unfavorable occurrence seemed to be a sign that “God was not in this.”

While I will not describe my ex as evil for not sticking through the tough times, I would say he showed that he had very little ‘muscle’ to handle trials. Haba, I am not God and cannot guarantee a life without tests. In my opinion, we were not faced with the worst situation ever; there was certainly hope at the end. Maybe he just felt emotionally over-burdened and completely hopeless. Maybe his ego was bruised because he could not help the situation…. Maybe he also had ‘other’ plans. The fact remains that if he could not endure such a temporary life bump, I doubt if he would have stuck by me if I were in Lekeasha’s shoes. I know, “God forbid”, right?

I once read an article1 explaining that women are more likely to stick around when a partner falls ill. But no doubt, there are other men like Chris Draft who stand even when faced with the unexpected–Lekeasha wasn’t even a smoker.

Trials are a fact of life, but clearly we are not all capable of handling them with grace. I do not pray to encounter extreme situations that would put my love for anyone to the test. But true love is a journey. So if those times come, I pray that I can cry with my loved one, do my funny dance to lift his spirit, apologize when I overreact or show weakness, and most importantly, love fearlessly so he knows he is not alone. I pray he would do the same for me, and whatever comes our way, we can look beyond the discomfort and share the kind of love that endures through thick and thin.

That’s the sort of love that matters.

¹When Spouse Gets Sick…Who Leaves?