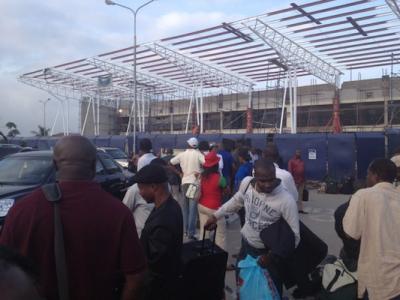 It has been reported that Arik Air, the Senate Committee on Aviation’s recommended national carrier, this morning suspended all its flights out of Lagos leaving passengers at the Murtala Muhammed Airport stranded.

Several accounts of the cause of the suspension has been reported in the media. The Will reports that all Arik Air flights have been grounded by labour unions over unpaid dues to them. It further stated that Aviation Union leaders and their members stormed the domestic wing of the Murtala Muhammed Airport as early as 7.am this Thursday 20th September, 2012 to block the carrier from operating its normal flights out of Lagos.

In another report, Premium Times said the flight suspended all its domestic operations due to the “persistent hostility of the Ministry of Aviation and Federal Airport Authority of Nigeria (FAAN) management.”

The Airline’s claim of suspending its local operations differ from reports that the Airline was officially shut by the Federal Airports Authority of Nigeria, FAAN, over an N18 billion debt the airline owes the aviation authority.

Premium Times further noted that the action has affected the Abuja and Port-Harcourt Airports as well. Hundreds of passengers across the country are now stranded as a result of the suspension.

This news coming barely 24 hours after the Senate Committe on Aviation recommended the Airline as Nigeria’s national flag carrier has brought up heated debates.

Photo Credit: The Will