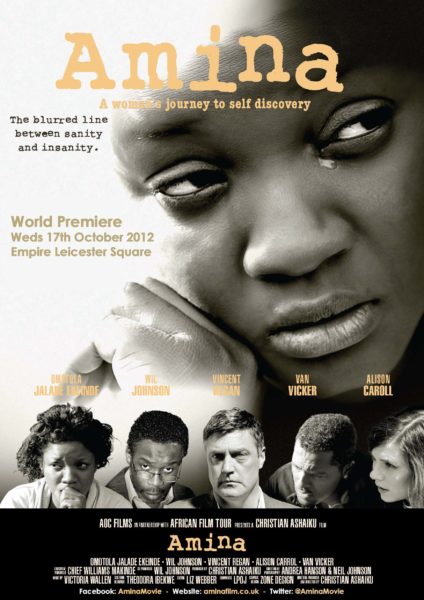 Nigerian actress, Omotola Jalade-Ekeinde is set to light up the screen this October in London’s West End, as she plays the title role of Amina in the movie, AMINA.

AMINA, is a deeply emotional and dramatic story with the overriding themes of love, loss and redemption. It is the story  of a gifted young woman who suffers a complete breakdown after a series of life changing events. She finds herself incarcerated in a mental hospital and the only person who can help her is her doctor (played by Wil Johnson). However, the doctor himself has to overcome his own demons before he can help Amina confront her past.

This gripping movie, told in a sequence of flashbacks, was shot in London. It was written, produced and directed by Christian Ashaiku.
The movie which has been dubbed “the first British movie starring Nollywood’s most bankable actress and Ghana’s biggest male star”  stars Van Vicker, Will Johnson, Vincent Reagan & Alisson Carroll.

The world premiere of the movie is scheduled for Wednesday the 17th October 2012 at the Empire Cinema, Leicester Square, London.

From the Sahara Desert to Lagos! Photos of Dr Newton Jibunoh, Kelechi Amadi-Obi & Chimamanda Adichie at the “Whispers from the Sahara” Auction