Ever since her triumphant victory as the Most Beautiful Girl in Nigeria in 2007, 25 year old Munachi Abii has been one to watch. Be it on the red carpet or at social gatherings, where she dons some beautiful creations or on the radio, where the beauty queen turned rapper’s singles are enjoying massive air play.

Wonder what she’s up to lately? BN has got all the scoop.
Hanging Out On Set with Usher Raymond, Ludacris & David Guetta 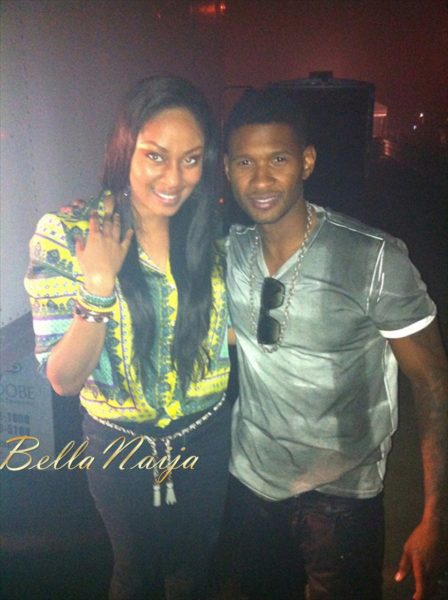 At the video shoot, where the producer of the song, David Guetta, was also present, Muna shares with us a photo of herself with Usher. Speaking on why she was present at the shoot, Muna said she was invited to “watch and learn as part of my music business education and for my career. That’s all I can say for now”

Her Red Hot Hair Do

Move over Rihanna, there’s a beauty queen turned rapper, rocking your famous red hair do better. After spending over a month in Atlanta, Georgia, Munachi was spotted at BBC Studio, London for an interview with DJ Edu on the 1Xtra Show. Her interview is not the only thing that got everyone talking but her new red locks. Looking simple and fab at the interview, Muna was all smiles and shared this photo with us.

Her Upcoming Album
Munachi wasn’t all meet and play in London. According to a source close to her, Munachi who officially released her first single, “I Feel Real” in 2010, is presently in London still recording songs for her debut album, The Goddess, The Hustler. 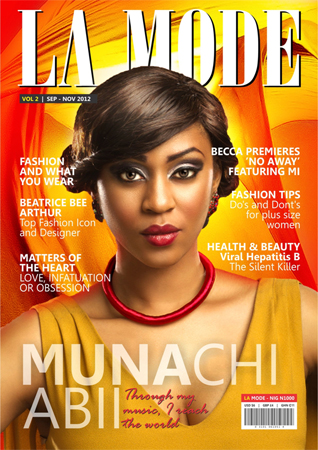 Smoking hot on the cover of La Mode Magazine’s September – November 2012 issue, where Muna says through her music, she reaches the world. BN can exclusively unveil more fabulous photos of the rapper inside the lifestyle publication. Shot by celebrity/fashion photographer, Obi Somto, Muna strikes different poses in gorgeous pieces by budding Nigerian design label, Vicky Heldan for the new issue.

Hanging on set with American entertainers, rocking a stylish new do and recording songs for her upcoming album, wow, Munachi is definitely one to watch in 2012.