Reminiscences - A Tribute to Remi (Osholake) Lagos by Betty Irabor

On Saturday, 3rd of November 2012, Nigerian designer Remi Osholake of Remi Lagos passed away after a short but valiant battle with cancer. The 51 year old designer’s influence went far beyond the world of fashion. Tributes have been pouring in from all around the world. Friends, admirers, colleagues and so many others are paying tribute to the beloved designer. Below is a tribute from Founder of Genevieve Magazine, Betty Irabor.
******* 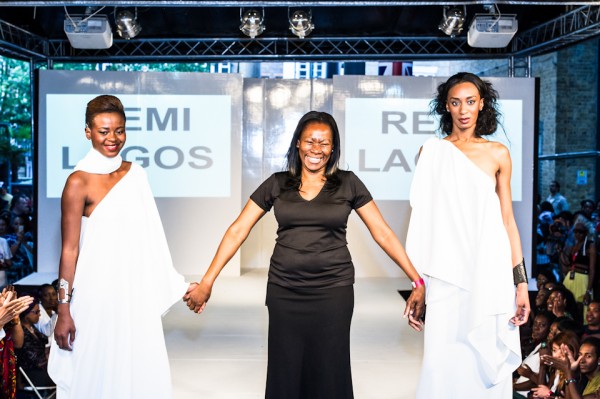 A while ago, my friend Helen Ajayi invited me on a trip on her brother’s cruise liner, which had just been launched. I was in the middle of production (as usual) but was assured that we would only be gone a couple of hours and that it would be fun. Fun was something I could use especially at a time like that. A few hours turned out to be the entire day. But I was excited about the prospects of a cruise on a working day; I put my laptop away and joined Helen.

On arrival at our muster point, I saw Remi; Helen hadn’t mentioned that anyone else I knew was sailing with us. But with Remi on board it looked like more fun as we exchanged banters. My excitement turbo charged as we boarded and old school re-mixes wafted from the big screen and the waiters welcomed us with Champagne and wine. The small party of six soon sat down wining and dinning as we sailed. Good company, good music, sea food….ahhhhhh!

That was one of my closest sit down encounters with Ms Remi Osholake, famously known as REMI LAGOS. Before then, I randomly visited her boutique at Mega and treated my self to her flirty, floaty, fluid boubous and kaftans. I really used to marvel at the fact that she took everything in her stride; she lived her life on her own terms and always seemed like someone who had no issues. She would make light of her challenges and never hesitated to say kind words about Genevieve and salute my perseverance.

Remi was bold and very confident in herself; on one of my visits to her, a friend from Dubai had called to say she was in town and could she come over? I was a bit wary of her coming to meet me at Remi’s boutique because she was a designer who specialised in a near similar line as Remi although she was based in Dubai. I was still thinking of how to work out the logistics when my friend called to say she was at Mega, so I had no choice but to ask her to meet me at Remi’s. When she walked in, I made the introductions and added that my friend was in the fashion line as she. And what do you know? Remi immediately began to tap her brain about taking the Remi brand to Dubai too. My friend was too happy to share her business modus operandi with Remi. In no time at all both hit it off and my friend reciprocated Remi’s openness with frank business ideas that Remi found very valuable. She said to my friend later “oh, thank you” and went ahead to ask if she made what she was wearing and proceeded to shower compliments on her. And we all chatted as if we had planned the meeting.

Remi was mighty proud of her brand and she hardly wore anything else. She loved her black and hardly wore make up. She lived her life just the way she wanted to live it, she never masked who she was. She was real and was her own best cheerleader. She believed in her brand and relished in her own creativity and style.

We had a few face-offs especially concerning her adverts in Genevieve. She always insisted that her adverts must be run on the right side and not on the left page of the magazine. Once or twice we ran foul of that and she breezed into the office fuming and re-affirming her stance on her adverts. My marketing team on the other hand had insisted that there’s a surcharge for special positions. Caught in the middle I allowed her have her way and that became the order for Remi’s adverts in Genevieve magazine.

The last time I saw her was in August at a friend’s mother’s 80th birthday party in Lekki; as always she wore her signature kaftan but this one was emblazoned with Nigeria’s coat of arms; very proudly Nigerian was the message. I kept trying to get up and go say hello but I soon lost sight of her… and that was it!

“Why do you like pink so much” Remi asked as we sipped wine on the Prest boat that afternoon. “Even your pen is pink” she observed. Then, it was time to go take some snapshots on the sunny deck; “look” she said “her sunshades are pink too”, she giggled and we cracked up laughing. Remi laughed a lot, her smile was her make-up so she didn’t mask her face with all the beauty paraphernalia most of us can’t do without. Her bubbly laughter was a symbol of her free spirit.

When I was told she had cancer, I thought she would beat it even if the cancer was at an advanced stage. Then the news of her death broke on Saturday leaving me numb and then angry at death. DEATH!

Not another death, I sighed. Not another death to cancer… but Remi is at peace now, free from pain and fear of death’s blow. For us however, the struggle continues. In all these struggles and every day upheaval it would be a good thing if we took time out for ourselves. We must factor our health into our TO DO LIST.