BN Bytes: All About Iyanya! "Kukere" Breaks Records & his Exclusive Interview on Factory78 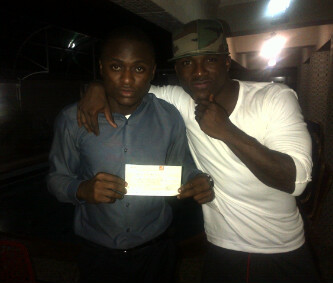 Iyanya has so many reasons to be in the news today.

A few hours ago, the “Ur Waist” crooner took to Twitter to announce a massive career accolade:

Mtech in my house to present me a cheque for breaking the record for Downloads on callertunes in Africa. Thank you all #kukere — iyanya mbuk (@Iyanya) December 6, 2012

A big congratulations goes out to Iyanya for his record breaking achievement!

As for the “celebrity love triangle”, a lot of it is still pretty much hearsay and no official statement has been released by Iyanya or his camp, but, in the heat of the gist’s buzz on Twitter, this happened:

After an interview with @iyanya and yes he cleared the air……lol instagr.am/p/S5c1ieN3xx/

I’m sure we’re all anxious to know what “air has been cleared” but while we wait, here’s a recent interview from the “Flavour” crooner, Iyanya on Factory78.

Factory78tv caught up with Nigerian Afro-pop sensation Iyanya when he stopped in the UK alongside label mate Emma Nyra to perform at the sold out AY show held at the Indigo2 in London. He gladly talks about his 2012 hit songs “Kukere” and “Ur Waist”; also about shooting videos in the UK for “Flavour” and other songs during his short trip. Catch Iyanya’s fun filled interview including his “Ur Waist” dance class with Adesope right here on Factory78tv.