Conquering My Phobia For Flying 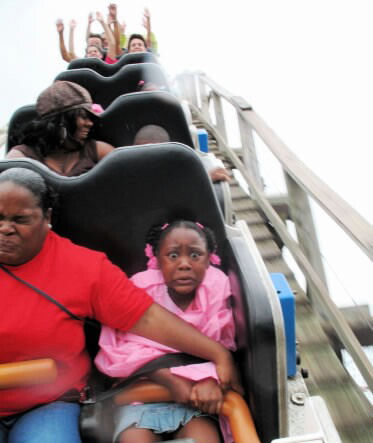 It all began 8 years ago, I was taking a much needed winter break and flying 10 hours non-stop to London. It wasn’t my first time flying this route, but this time something kept nagging at me.  My flight was leaving in a few hours and I had last minute preparations to make and a checklist to go through. It was Christmas Eve and I couldn’t wait to get this show on the road!

While hurriedly saying my goodbyes that ominous feeling assaulted me again. I tried to push it away but it stayed with me this time, through removing my belt and shoes at security check, through people-watching in the departure lounge, through a 30 minute delay, right through me boarding the plane. In fact, the feeling did not subside until I was seated in #23B.

Shortly after takeoff,  the lady next to me started scrambling for a seat to “spread out” but the flight attendant told her she couldn’t move yet and to “please be seated Mam”. In my effort to appear uninterested in the drama unfolding beside me, I looked out of the window. It was then I noticed we were flying into a brewing storm. Seeing flashes of lightening made me wonder if we were in any danger of being struck.

Suddenly and without warning, as if in answer to my query, I was jolted out of my reverie when the plane dipped about 10 feet(now this is the same death grip roller coasters have on me and I hate them for that. They drop and at the very moment you’re free-falling to earth, your brain is confused, panicked even, wondering what the heck happened to the rest of your body. And just before that moment when alarm sets in and your eyes bulge out of your head and you open your mouth to scream but no sound comes out, just before that moment, you attain a state of blissful ignorance you don’t even realize you’re falling).

As I tried to regain my composure and stick my eyes back into their sockets, the plane dipped again. This time around I screamed and grabbed onto my armrests for dear life. Five minutes later, I still had a white knuckle death grip on the arm rests. They had become my life support and there was no way I was letting go. Two minutes later I convinced myself that maybe it was ok to let go. Slowly and gently I pried my hands off, one finger at a time. It wasn’t until then I realized I had pushed away the hand of the lady seated next to me as she was now huddled in the corner, clutching onto her right armrest with both of her hands and looking at me like a wounded lion cub. Needless to say, there was no more talk of her ‘spreading out’.

That’s it! I was done with this trip and I wanted to go home NOW! Unfortunately, it was a non-stop flight and we were only in the first half hour of the trip. Despair hit me like a ton of bricks, what to do now?

The temperature in the cabin increased (or maybe it was just my temperature) but I was sweating profusely and I felt like I was burning. I wondered if perhaps we had lost our way and flew a little too close to hell. I reached an unsteady hand in front of me to grab my bottle of water but the shakiness of my hand surprised me much more than the shakiness of the plane.

A raw fear enveloped me and seared through my soul, I was in agony and the other passengers acted as though this was all normal, a regular day at the park. I wanted to yell at them to get a grip, come out of their stupor and realize this might be the end but when I opened my mouth, there was no sound. By this time the plane was shaking and rattling as if it was being put through a paint mixer. Two babies were crying so loudly I could only look on in envy. If only wailing  was a guaranty the plane would be put down immediately I would belt my soprano lungs out. But alas, Captain Cowboy had a different idea as he maintained radio silence and so we flew on, crying babies and all.

Three hours later and the plane still rattled as we bounded along the stormy sky. Intermittently, we would get a reprieve of softer shaking followed by a series of heavy duty rattling that I can only compare to a magnitude 5.2 earthquake. I didn’t want to die so I introspectively checked on any outstanding sins on my records, said a series of heartfelt prayers and tried to calm myself through some breathing relaxation exercises. I don’t think the exercises worked. The plane was still shaking as it had been for the last five hours and I was wound up as tight as a coil and expecting another plunging free-fall in 5, 4, 3, 2, 1, 0, -1, -2 -20, -40…..minutes.

The anticipation of free-fall was worse than the actual free-fall. And so, painfully, I waited for it knowing that if I concentrated enough and kept from making sudden movements, I could somehow remotely guide the hand of the pilot as he navigated the bumpy, stormy skies. It was my responsibility now since the other passengers felt unperturbed by our cavorting plane ride. Some even had the guts to go on reading their novels or newspapers while others just watched the in-flight movie on their very shaky screens. One woman was even so comfortable to knock back glass after glass of red wine. The audacity!  It was obvious it came down to me and me alone to telepathically aid the Captain in flying this rig to safety and I wasn’t about to fail now.

In a little while the food carts bounced up the aisles (-400, -401, -402 …….wait for it….) “How can people eat at a time like this?” I wondered incredulously. The rattling and shaking still hadn’t let up, in fact, it had become a normal part of the ride at this point, even lulling one of the crying babies to sleep. The attendants served trays laid out with prepackaged airline food; a roll, crackers, cheese spread, water, rice curry and chocolate. They couldn’t take the chance of spilling hot coffee/tea on passengers so we all had to do without (well whoop-dee-do!).

Halfway through the meal service the captain who had been quiet up to this point yelled into the intercom “Cabin crew take your seats!” thus suspending food service. He said it with such urgency that he ended up causing more excitement than comfort to the passengers. Suddenly the plane shook even more vigorously than before and I could feel it being blown sideways (no, it was not my imagination) like a leaf blowing in the wind. I gathered enough courage to unclasp my right hand from the arm rest as I reached for my cup of water in a bid to quench my dry parched throat but I only ended up spilling the water all over myself. Until now, every feeling of fear I had experienced was either emotional or psychological but nothing physical like this. I didn’t like it one bit.

Seven hours after take off (-60000,-60001… I think I double counted somewhere but my mind needed something stable to anchor itself to as I was really coming unglued) we were well over Canada and flying no, bouncing over the Atlantic ocean. It was going to be a long night and my body was tired. I started to believe there were potholes in the sky and we kept falling into each one of them (the mind is a powerful machine, what can I say).

I must have fallen asleep somehow because when I came to, a good 10 minutes was unaccounted for (at least I hope I was asleep).

I used to love clouds but after this, I am never even looking at a cloud again, ever! Now I was getting quite upset with the pilot, why wouldn’t he talk to us? For God’s sake lie to us if you have to but the silence was not working!

At about 40 minutes before our descent into Heathrow airport, the captain informed us that “The crew will not be serving afternoon tea today because there was too much turbulence” well duh! Where had he been for the past 8+ hours? I was rather sad I wouldn’t be getting my afternoon cuppa but I figured it wasn’t worth risking life or limb.

The good news was that this ride form hell was finally almost over and we were very near our final destination (-90,000……I think it’s safe to stop counting now). We then began our descent which turned out to be the smoothest part of the trip. I felt so elated to be on solid ground again that I could have kissed the ground but instead I flashed the most dazzlingly smile I could muster, thankful for making it in one piece and I quickly exited the cabin.

The nightmare was finally over and I was back to looking forward to my vacation again. In 6 days I get to do it all over again, oh joy!

Do you have a fear of flying? How do you deal with it? Can you share some of your scariest rollercoaster/flying experiences?

As She Prepares to Pass the Miss Universe Crown to the Next Queen, BN Beauty Spotlights African Queen, Leila Lopes’ Tenure in Photos