"I Apologise to Everyone for any Inconvenience, Most Especially the Trek to Jerusalem" - D'banj addresses 2012 Koko Concert Issues The 2012 Koko Concert was one of the most anticipated events of the Christmas season. While the show delivered the stars as promised; fans of D’banj were left fatigued and upset due to a plethora of logistics issues.

While fans enjoyed the performances from Tinie Tempah, D’banj, Kay Switch, Iyanya and more, many expressed to BN that their joy was dampened by the aforementioned issues.

It has been over 24 hours since the concert ended. During this time, the #KokoConcert trended on social networking site Twitter with many fans who attended sharing various stories about their experiences.

Here is what he had to say;

To all my great FANS that came out for me. Words cant express my gratitude and love for u guys. I apologise to everyone for any inconvenience, most especially the trek to Jerusalem. Logistics crew were overwhelmed by the crowd turn out and traffic made adapting hard. I send out my sincere apologies especially for the fact that you still came and made the show a Great success. I promise there won’t be a Repeat of what happened. Measures are being taken to guarantee that. Again thank you and God bless. There can’t be D’banj without u guys, love. 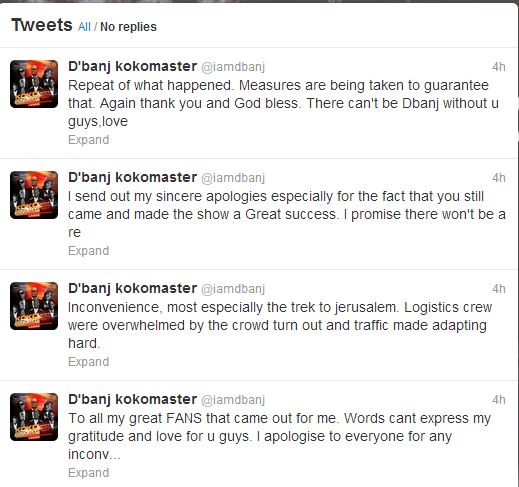 Related Topics:dbanjKoko Concert
Up Next