In January 2012, we started a series of celebrity interviews at BellaNaija tagged the “BN Saturday Celebrity Interview”. Our aim was to bring our esteemed readers closer to their favourite celebrities, asking them the questions on the minds of their fans and to give the celebrities a chance to express themselves on the BN platform.

We wanted the interviews to be as intimate as possible so we adopted the one-on-one chats where the celebrities had to speak and answer their questions immediately rather than via email. It has been an interesting journey so far.

Week after week, I’ve had the opportunity to get into the homes, the offices, the studios and the lives of our favourite celebrities. Each celebrity has been unique in his or her own way. Despite the glitz and glam surrounding their careers, my regular interaction with them revealed that they are just regular people like you and I with their unique talents, their good qualities and their flaws. I am especially very grateful to ALL the celebrities who have let me into their world and given me a chance to ask them numerous and sometimes really private questions.

We’ve had a rich blend of celebs on the weekend feature. Actors, musicians, DJs, filmmakers, beauty queens, TV presenters, OAPs and more have been gracious with their stories and we are grateful for the opportunity to share them.

On this last Saturday of the year, we have decided to let our very special readers review our performance on the BN Saturday Celebrity Interviews and give us feedback and suggestions on what you would like to see in the coming year. The reason why we do this is because of YOU, so we want to know what you think about this feature and would like to have your suggestions on how we can make it a more interesting experience for you.

We are also using this opportunity to recount some of the most popular and favourite celebrity interviews this year. It’s been a tough job putting this list together. Every interview has been unique in its own way, but some have stood out.

Here is a list (in no particular order) of what we think are the top 12 celebrity interviews for the year 2012:

Halima Abubakar – Nollywood Actress
Halima’s interview was one of the most popular for several reasons. She did not shy away from any question asked, including the controversial ones and she was as blunt as ever.  The interview also revealed her charitable side as she spoke about her affiliations with several charity organisations and her desire to help the needy in the society.  Click here to read Halima’s interview

Toke Makinwa – OAP/TV Host
As one of Nigeria’s most popular female OAPs, Toke’s interview created quite a buzz. From her style, the reason behind her controversial comment about Linda Ikeji to her career rise, Toke bared it all in one of our most sizzling celebrity interviews. Click here to read Toke’s interview

Uche Jombo – Nollywood Actress
I got a chance to have an interview with Uche just a few weeks after her wedding and she was glowing like a newly wed. It was her first exclusive post-wedding interview and she held nothing back while answering questions about her husband, her wedding and her career.  Click here to read Uche’s interview

Lynxxx – Musician
Lynxxx showed us just why he is one of Nigeria’s hottest music stars. He exuded confidence and class through his interview, opened up about his family, his music career and the most importantly, talked about the qualities that attracts him to a lady. Click here to read Lynxxx’s interview

Rukky Sanda – Nollywood Actress
Several controversial reports had been said and written about Rukky and she expressed during her interview that she cared less about any negative press. We also got to see another side of her. Rukky spoke about her several projects in movie directing and producing revealing that aside from being a popular celebrity, she was a very hardworking lady. Click here to read Rukky’s interview

Omotola Jalade-Ekeinde – Nollywood Actress
Omotola already had a huge fan base and it was again made obvious through the response to her interview. During her interview, she revealed intimate details about her family, her acting career and her much talked about music career which got some mixed reviews when she mentioned she was working on releasing yet another album. Click here to read Omotola’s interview 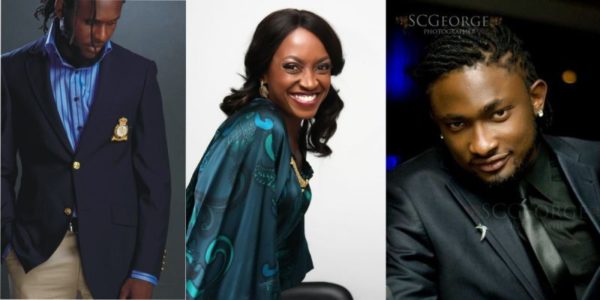 Clarence Peters – Ace Filmmaker
The interview with Clarence got mixed reviews from our readers, but one thing that stood out was that he is intelligent, inspiring and has a lot of respect from his fans. Clarence addressed several issues concerning Nigerian music videos and spoke about his special relationship with his mother, Clarion Chukwura. Click here to read the interview

Kate Henshaw – Nollywood Actress
Through her interview, Kate only gave us more reasons to love her. She was open, encouraging and inspiring at the same time. Despite the challenges she had been through, Kate revealed that she had put the past behind and got us all touched with her positive attitude. Click here to read Kate’s interview

Uti Nwachukwu – TV Host/Actor
Uti’s interview re-established the fact that he is one of Nigeria’s most popular entertainers. He spoke about several topics during his interview including his Big Brother Africa experience, his frequent appearances at major events and many more. Uti also introduced something new on our site – he responded to questions and comments by our readers which made his interview even more interactive. Click here to read Uti’s interview

Bimbo Akintola – Nollywood Actress
After a long break from the big screen, Bimbo returned in the movie Hoodrush giving us a chance to catch up with one of Nigeria’s most versatile actresses. Her interview revealed that despite her long break, she was still a favourite to many. She spoke about several topics including her career, love, family, relationships and her future plans. Click here to read Bimbo’s interview

Stella Damasus – Nollywood Actress
Catching up with Stella was very interesting. In one of her most revealing interviews ever, Stella talked about the challenges she faced around the time of her late husband’s death and how she has been able to overcome those challenges and deal with the irreplaceable loss. She also talked about her various charity projects and how she has been able to move on. Click here to read Stella’s interview

Davido – Musician
Davido was still in the early stages of his rise to fame when we caught up with him for an interview, and as such, his interview created a lot of buzz. During his interview, he spoke about coming from a wealthy family and losing his Mum at a young age. He also responded to controversial questions about his age, reactions to his video and his tattoos. Click here to read Davido’s interview

We’ve also had a host of interesting interviews this year. Please click on the name of the celebrity to read their interviews on BN.

So tell us, which was your favourite celebrity interview this year? What are your thoughts and suggestions for the BN Saturday Celebrity feature as we move in to the coming year?

We appreciate your feedback and would love to hear from you! Thank you for visiting every weekend.

“I Apologise to Everyone for any Inconvenience, Most Especially the Trek to Jerusalem” – D’banj addresses 2012 Koko Concert Issues