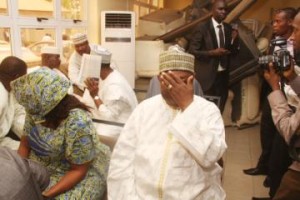 Following the two year jail sentence with the option of a N750,000 fine passed on John Yusuf, the former assistant director in the Federal Civil Service who embezzled the Police Pension fund, the Economic and Financial Crimes Commission has re- arrested him.

Punch reports that he was re-arrested today because because there were other  pending cases  against him.

Yusuf was set free by a Federal Capital Territory High Court, Abuja on Monday  after paying N750,000 fine for conniving with others to defraud the office and pensioners of N27.2bn. His judgement was stiffly resisted by most Nigerians who felt he deserved a harsher punishment for his crimes.

Spokesperson for the EFCC, Wilson Uwujaren told Punch that he would be re-arraigned to face fresh charges.