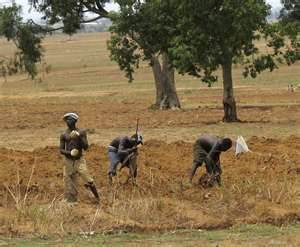 Just three days into the new year, the Federal Government of Nigeria has mentioned its plan to spend yet another outrageous sum of money, this time on mobile phones.

According to Ibukun Odusote, permanent secretary, Federal Ministry of Agriculture, the Federal Government is to procure 10 million telephone handsets worth about N60 billion from China and the US for free distribution to rural farmers across the country.

This means that the federal government would spend a minimum of N6, 000 per unit which it said would be made available to the beneficiary- farmers before the end of March.

Odusote said that the plan was part of the e-Wallet project under which the ministry officials would be able to educate, inform and communicate with the farmers in the rural areas across the country on the latest and best agricultural practices, as well as the current prices of commodities in the market. She said the beneficiaries would be “women and youths” in rural areas.

“We are talking about 10 million handsets, each handset would be costing, may be N6000 or N4000 because it is in large number. We are not going to buy in pieces like that. We will buy directly from the manufacturing companies. We have agreement with some organisations in China and some in the United States, they are going to provide all these handsets for us because they are also interested in investing in the Agricultural sector in Nigeria. So you have the idea and estimate of the cost” she said.

She said this is part of the incentives and the enabling environment being created by government at the centre to encourage women and young ones; particularly the graduates, to go into farming and agric-business.

This move has however been criticized by most Nigerians as many argue that N60 billion is too large to be spent on acquiring mobile phones. Also, some argue that there are more important things that farmers need such as fertilizers and soft loans rather than mobile phones.