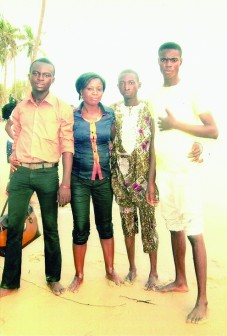 Samuel (left) & others shortly before the tragedy

The festive period is a time when people love to hang out with friends and family at various relaxation centers. In Lagos, a city which borders the Atlantic ocean, the beaches are a favourite relaxation spot for many and they usually have a throng of visitors during the Chrismas and New Year period.

Sadly, for Samuel Obu, the teenage son of Pastor Owulo Obu, his life was cut short at the Lekki Beach, Lagos Nigeria, where he and some friends went to hang out just before the new year. Pastor Obu is the head of Latter House of God Church located at 26/27 Guinness Street, Pero bus stop, Agege, Lagos.

According to PM News, 17 year-old Samuel went to the beach in company of a female member of his father’s church, Comfort Adikpe, 30; her boyfriend, Busayo and her younger brother, Godwin to enjoy themselves. The report stated that before Samuel went to the beach on Sunday, he approached his mother to give him transport money. But when she delayed, he went into his mother’s bedroom and picked a N1,000 note for his journey.

Comfort told PM News that Samuel drowned at the beach when he and her brother, Godwin, went to play in the Atlantic sea  waves. “When the wave swept him away, we begged the divers to rescue Samuel and after some efforts they retreated when the wave was about sweeping them away also,” she said.

She added that when the matter was later reported at the police station at about 7.35 p.m on that fateful day, she was detained till the following morning when she was released.

Comfort, a recharge card seller who hails from Benue State, north-central Nigeria, added that Samuel and Godwin were drummers at Latter House of God founded by Samuel’s father.

When PM News visited the Pastor’s residence yesterday, the mother of the late Samuel was still in shock. All she could manage to say was, “we are still confused about what happened to my first child.”

This is really sad. May his soul rest in peace.

Events This Weekend: The “Welcome to 2013” Edition