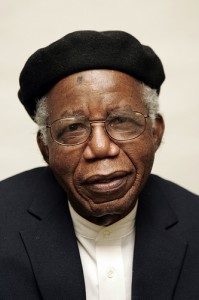 I do not remember the date of my grandfather’s death, but I remember walking into my parents’ room and stopping in shock at the sight of my mum and aunt crumpled to the floor in grief, hands lifted up in both question and despair. I thought I had forgotten, but I remembered that picture today.

My Papa lived a long life and he passed on in peace, ready to go.

We went to the village to prepare and I was arrested by the debates on what colours to wear to accompany the white that we would be wearing for his burial. When I asked my mum why we were wearing white instead of black, she told me that black was worn to mourn the passing of someone felt to die too soon, but when someone died at a ripe old age, white was worn – to celebrate their lives and to honour their passing.

They finally decided on fuchsia.

Our home in the village was full of trees and flowers. I can see my Papa now, walking round the house, pointing out the different things he had planted for the grandchildren who would come to visit. He would point out the mangoes he’d planted with boughs that drooped so low that you could lie on the ground and pluck a ripe mango and eat it lazily while you listened to the chatter of birds overhead and the conversation of people crossing our property on the way to their farms, or to the stream.

We’d stroll past the orange trees with their tiny, sharp tasting fruit, he’d point out the path that led to the village near our house, past the queen of the night trees that one year had suffered from an infestation of caterpillars, past the guava tree with its “enjoyment branch”, a thick branch that we would bounce on for as many hours as we could before someone came to shoo us into the house to eat.

We’d finally stop at his pride and joy – the blushing hibiscus, a beautiful flower that started the day pure white. As the day advanced, the flowers would slowly start to develop a rosy glow. By evening, they would be pink…kissed by the sun in the course of the day till they had a permanent blush. The blushing hibiscus was one of nature’s most beautiful miracles.

So they picked fuchsia, in honour of my grandpa and the blooms that he loved; and they buried him in the home that he made, not just for himself, but for his children and their children.

Professor Chinua Achebe’s passing, for some reason, has brought all these memories flooding back. These were men who lived for a legacy beyond them. It was not about fame and fortune. It was about doing the right thing for those that came behind.

More than I mourn Professor Achebe’s passing, I celebrate his life; a life full of milestones…of moments worth remembering. His principles were clear for everyone to see. He lived his purpose and in doing so, he left us with a legacy of words that we will one day read and speak to our children. How remarkable, that in living and breathing, in doing what he was meant to do and doing it the best that he could, in walking his talk, in living his principles, that this man became a legend…a voice.

My grandfather did not care how many friends I had or how popular I was. He didn’t want to know who was famous and what person A said or did to person B. Those days on the veranda, when he sat in his easy chair and we watched life go by, he would talk to me about being honest, about studying hard, about reading hard and achieving milestones. He would talk to me about my PhD and remind me not just of how much he believed in me, but how high his expectations were for me, a 13 year old girl.

There is a generation of heroes, like my grandfather, like Professor Achebe, whose life went beyond the ordinary. They understood that immortality is not in things acquired but in a life lived well. And so they did.

I believe that it is the children of these great ones that will make a difference. That we, acorns from great trees, will grow to become a network that will turn Nigeria around. I believe that it is from these ones that the writers, politicians, teachers, doctors…that the true nationalists will come, that the midwives of the new Nigeria will come.

There is a generation of greatness that used to walk this earth, and they left their mark; in the books they wrote, in the values they taught, in the lives they lived. Many of them we will never know, they were not all famous, but they brought up children with fire and passion, with zeal for nothing but to be the best that they could be. They lived not for themselves, but for the ones who would come after, for us who are here now.

And as we honour the passing of one of the ones from this generation of greatness, I find myself thinking again of my grandfather, and the things he taught me: lessons in honesty, in doing right and caring for my fellow man, lessons about family and values and making a road for those who are coming after me, lessons about making my life count, about leaving an unforgettable mark after I am gone.

I find myself thinking about my grandfather and his generation.

Their work has ended, ours has just begun.