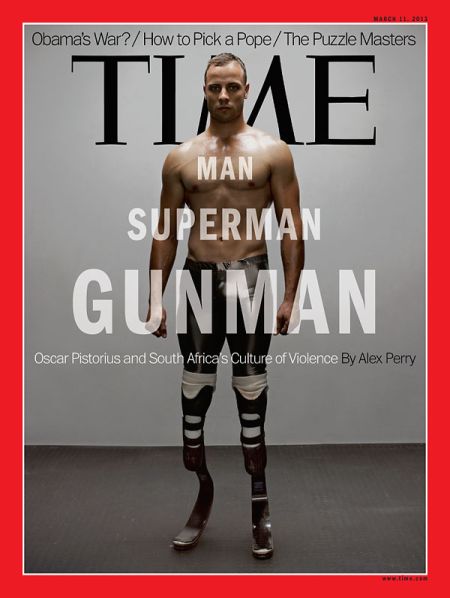 South African Olympic athlete Oscar Pistorius who is currently being investigated for the murder of his girlfriend Reeva Steenkamp covers TIME Magazine this month.

The very lengthy cover story ‘Pistorius And South Africa’s Culture Of Violence‘ considers the wider topic of South Africa and its culture of violence even in the midst of its rise above apartheid and the development in the country.

Below is an excerpt:

Four days before Oscar Pistorius shot her in the elbow, hip and head through the bathroom door at his home in Pretoria, Reeva Steenkamp tweeted a message about violence against women in South Africa. “I woke up in a happy safe home this morning,” the 29-year-old wrote. “Not everyone did. Speak out against the rape of individuals.” As Valentine’s Day broke with the news that the 26-year-old who became a global icon in 2012 by running in both the Paralympics and the Olympics had killed his girlfriend, Steenkamp’s words–repeated around the world–only added to the sense of improbability. I checked Steenkamp’s words on Twitter. Then I found myself scrolling back through her life in 140-character snippets.

Steenkamp–who described herself on Twitter as “SA Model, Cover Girl, Tropika Island of Treasure Celeb Contestant, Law Graduate, Child of God”–tweeted a lot. She loved her friends! She loved red-carpet events and award ceremonies and sponsored parties! She loved her modeling agency and new skin creams and the people who fixed her hair!

Above all, Steenkamp really loved her favorite people. And from New Year’s Day to Jan. 7 she posted regularly from a vacation she was taking in and around the city where she was born, Cape Town, with a few friends and the man she called “my boo,” who on Twitter goes by @OscarPistorius. On Jan. 3 she posted a picture of the sunrise taken from the balcony of the $680-a-night presidential suite at a spa hotel in Hermanus, 90 minutes southeast of Cape Town. Later that day she tweeted, “The chauffeurs in Cape Town hey. Nice!” and attached a picture of Pistorius driving an Aston Martin. On Jan. 4, name-checking Pistorius, her best friend, a private banker and a luxury-car importer who was sourcing a McLaren sports car for Pistorius, she tweeted about a lunch the five were sharing at Cape Town’s newest hip hangout. “Shimmy Beach Club!” she wrote. “Tooooo much food!!! Amazing holiday :)”

Steenkamp had been dating Pistorius only since November. However brief their life together, her tweets reveal the glamorous life of the white South African elite. In many ways, the end of apartheid 19 years ago, and the crippling sanctions that died with it, made their lives better. Incomes rose, guilt fell. But beyond the painful irony of a woman killed by gunshots having tweeted about violence against women, there was also the killer’s defense: that Steenkamp was the tragic victim of a racially splintered society in which fear and distrust are so pervasive that citizens shoot first and ask questions later. And then there was the murder scene itself, a locked bathroom within a fortified mansion in an elite enclave surrounded by barbed wire, in a country where more than half the population earns less than $65 a month and killings are now so common that they reach the highest echelons of society and celebrity. Why is gun violence so prevalent in South Africa? Why is violence against women so common?

What are your thoughts on the cover and the ongoing investigation into his girlfriend’s murder?

BN Cuisine With Chef Fregz: All My Ladies