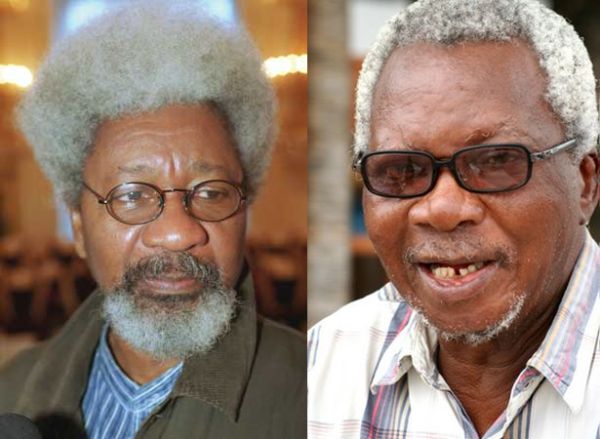 Yesterday, we were shocked to hear about the death of Nigeria’s literary icon, Chinua Achebe.

The renowned novelist, poet, and author of the classic novel, ‘Things Fall Apart‘ passed away in Boston, U.S.A and since then, tributes and condolences have been pouring in.

He reportedly died after suffering from an undisclosed ailment and although the nature of the ailment has not been revealed, veteran writers and Achebe’s compatriots, Prof. Wole Soyinka and J.P. Clark, have said his death may not be unconnected to the bomb attacks that occurred in Kano on Monday.

In a joint statement they issued on Friday which was made available to Punch, they described him as “a brother, a colleague, a trailblazer”.

The statement entitled “On the Passing of Chinua Achebe,” read:

“For us, the loss of Chinua Achebe is, above all else, intensely personal. We have lost a brother, a colleague, a trailblazer and a doughty fighter.

“Of the ‘pioneer quartet’ of contemporary Nigerian literature, two voices have been silenced – one, of the poet Christopher Okigbo, and now, the novelist Chinua Achebe.

“It is perhaps difficult for outsiders of that intimate circle to appreciate this sense of depletion, but we take consolation in the young generation of writers to whom the baton has been passed, those who have already creatively ensured that there is no break in the continuum of the literary vocation.

“We need to stress this at a critical time of Nigerian history, where the forces of darkness appear to overshadow the illumination of existence that literature represents.

“These are forces that arrogantly pride themselves implacable and brutal enemies of what Chinua and his pen represented, not merely for the African continent, but for humanity.

“Indeed, we cannot help wondering if the recent insensate massacre of Chinua’s people in Kano, only a few days ago, hastened the fatal undermining of that resilient will that had sustained him so many years after his crippling accident.”

Even though he lived far away in U.S.A, Achebe was still connected to his roots and followed closely the happenings in Nigeria.

Celebrating LPM at 4! Photos & Scoop from the Anniversary/February 2013 Edition in Lagos