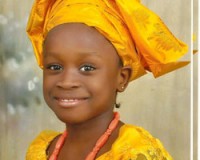 If as a parent or a child caregiver, you’ve ever been casual about putting a child below 12 years-old in the front passenger seat of a car, please be more careful next time.

A recent accident in Asaba, Delta state, which resulted in the death of a six year-old girl has brought about a wake-up call on the dangers of putting children below the age of 12 years in the front passenger seat while driving.

Chizurum Gloria Emmanuel was killed on her way back from school when her mother who was driving the car, got involved in an accident.

Guardian reports that she was in the car with her three brothers. Here is an excerpt from the story on how the accident happened:

What was supposed to be a happy homeward journey ended in tragedy when an impatient motorist suddenly tried to beat the vehicle in her front, a Toyota Corolla at the U-turn opposite St. Patrick’s College. In an attempt to avoid hitting the car, the driver suddenly stepped on the break pedal. A panicky Mrs. Emmanuel attempted stepping on her break pedal, too, so as not to collide with the car in her front but it was too late.

Tried as she could, she still lightly hit the bumper of the vehicle, and then the airbag burst. She heard a noise and the car, an Audi saloon screeched to a halt. She turned to her right and saw the only daughter in a family of four children who was sitting in the front seat writhing in pains. The Primary Two girl had a cut on her neck and was bleeding profusely from the nose.

She was rushed to the nearby Federal Medical Centre (FMC) which was just a few meters away from the scene of the accident. They tried resuscitating her with oxygen but sadly, few minutes after she was brought in, she gave up.

According to her grieving father who spoke to Guardian, Chizurum was an intelligent and obedient girl who never got in anybody’s way and always took the first position in her class.

A source at the Federal Road Safety Commission (FRSC), however, explained to Guardian that the airbag must have expired, as the impact of the accident couldn’t have been serious enough to trigger off the airbag. He added that it was advisable to check a car’s airbags 10 years after installation and to avoid putting children below the age of 12 in the front passenger seat as they are not mature enough to withstand the impact of burst airbags, should an accident happen. Motorist must always use their seat belts, he concluded.

Her death is very sad and we pray that her soul rests in peace.