My Name is Afam & I am the Traditional Feminist 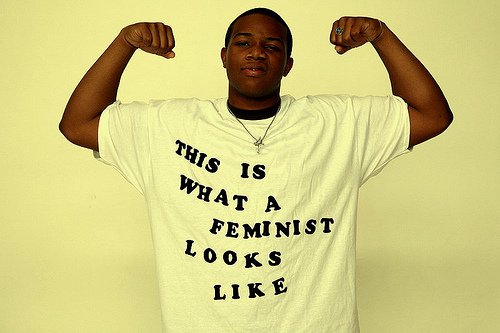 I am a feminist. I believe that there should be economic, social and political equality between men and women, however my brand of feminism is tarnished. Quite remarkably, it is tarnished by the very thing that makes me a feminist in the first place; my history. There seems to be an unbreachable gap between the way I see the world and how it actually is. The human mind is so great that everything I encounter is filtered by my incredibly myopic and astigmatic lenses until it supports whatever delusions I entertain. For instance, it is widely known that the higher up you go in society the fewer women you find, and this is a little odd because there are slightly more women than there are men. 52% of the world’s population is female.

Traditional feminists will declare that this is evidence of the oppression and suppression of women by men.  In my mind this isn’t the case. In my mind, the only reason why women are not as well represented in the higher echelons of society is that they must not want to, for if they did, they would. I know this sounds like the most bizarre, most biased thing in all the world but bear with me, this is going somewhere. If you have already branded me a chauvinist twat then feel free to leave, or call me worse names. Both are equally acceptable, but I’d rather you stayed.

The reason I think like this finds itself in my upbringing. Like all of our upbringings mine strikes me as impossibly unique, that is not to say that it was in fact unique, but I impose my individuality on every experience I live through. It is important to me that it is completely differentiable from an identical experience, experienced by someone else. I realise that I used the word experience consecutively but I don’t think it can be said any better. My paternal grandmother was a single parent for most of her life. She had six children, and though my father very rarely speaks of his childhood, I can tell that it wasn’t very easy but that the only reason he and his siblings survived was her hard work. She was rewarded with his unwavering devotion. If there was anything she needed he got it, and every major decision he took went through her. Can you imagine what this must have looked like to me when I was 5 years old? The man I beheld as the incarnation of a Greek god deferred almost completely to his mother, my grandmother, a woman.

My mother, on the other hand had, and still has both her parents. Her father was a University professor and her mother worked in Chevron. Anyone who knows anything at all about academia, must know that people do not go into it for the money. And if you know anything about Nigerian oil, or even just oil and the seventies, it will be pretty simple for us to assume that she was the bread winner. My mother married my father, and they weren’t very wealthy. He worked out of their one bedroom apartment and she worked at an insurance company. They had my older brother, and she kept on working at the insurance company and my father moved to an office a few minutes away from their one bedroom apartment. They had me and she quit her job at the insurance company and started selling flowers, and designing gardens. From what I gather she didn’t like the long inflexible hours, and she wasn’t too comfortable with us being raised by the nanny. She wanted to be able to drop us off and pick us up from school. She wanted to be at PTA meetings and Sports days and open days. Over the years, her little flower arranging and garden designing business grew. While my father is still the breadwinner, my siblings and I know that everything that we could possibly need can be serviced by either parent. They both have the power.

If in my family, it was only my mother that had some sort of power maybe my views would be different; maybe I would have seen the world as some sort of machine that naturally places women underfoot and lobs men high into the skies but this isn’t the case. Her sister, and her cousins all stand as matriarchs in their own right. This is what I grew up with. As a result, I can say with complete certainty that it is not in my nature to think that women are any less than men, as I have seen several instances when they have been more.

Because of my seemingly unique upbringing (it must be unique for if it wasn’t everyone else would be like me) I believe in feminism, and I am a feminist, but when presented with examples of injustice I am not only genuinely surprised that these things happen but I am also quick to present other reasons why the perceived injustices may occur. If you say to me, “Afam, women are penalized in the work place because employers see them as baby bombs. If they get knocked up, you have to pay them during their maternity leave as well as pay for a replacement worker.” My mind literally looks for a reason why this could not possibly be the case before it grudgingly settles on the possibility that there may be some discrimination going on.

I fear that I am so feminist, that I have imposed my own version of equality on a world that remains unequal, thereby making me complicit in the inequity.